The Blue Devil Booster Club at Haldane was formed 3 years ago to offer parent-generated support to the athletic programs at the school.  The Club meets once a month and acts as an advocacy and fundraising entity, to augment what the school is able to provide within its limited budget lines. On Monday, Nov. 15, in a new tradition, the Booster Club honored Haldane’s Varsity athletes and coaches with their third annual Fall Sports Letter Night.  A similar evening is held again towards the end of the school year. 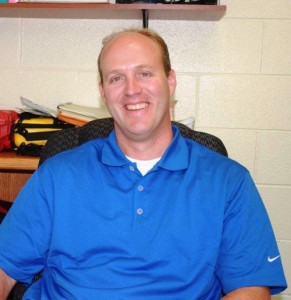 Opening remarks were made by Haldane’s new Athletic Director, Tom Cunningham, who called this “an exciting time of the year.”  Cunningham then turned the microphone over to Booster Club President Dan Hughes, who spoke of the momentum being gained by the Club. Over the past year the Club has provided specialized equipment to a number of teams, and has supplied banners as well.  Noting that “you may ask how banners can help?” he spoke of the Cross-Country team, and how they previously had to turn up at meets without even a tarp to cover their possessions in bad weather.  Now, with the new tent, “they look like they are there to compete—they belong there.” Mention was also made of the scholarships donated by the Booster Club, and of Haldane’s participation in bigger athletic divisions. 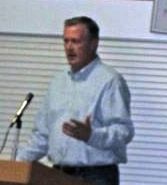 It was then time for each coach to present the Varsity Letters to all or some of their squads.  First up was Boys Soccer Coach Ahmed Dwidar, who remarked “We started out not thinking great things.  [We had a] lack of experience, looked sloppy in practice “¦ errors, but we put it together.  We got a Sectional title. We hope to build the program, and Sectionals put us back on the map for Haldane.”
Girls Soccer Coach Gary Van Asselt said of his team “Our record doesn’t reflect what heart they have. We brought up some of the JV girls—I think they enjoyed it.”
Longtime Football Coach Tony “Perc” Percacciolo was up next, and he acknowledged the new Athletic Director, saying “It’s Mr. Cunningham’s first year here; he runs the show like he’s been

here 20 years.”  Offering his congratulations to the other coaches and teams, he jokingly described practicing near the tennis team, “We had to tone it down for the tennis team.  And watch out for the balls flying out onto our field.” Turning his remarks to his own team, he said, “Not only do you represent your school, you represent your family, you represent yourself.  This past season was a tough one.  I decided not to go into the developmental league – – I wanted to make it tough, to challenge them. Success isn’t based on your win/loss record.  We’ll always be the underdog – – we’re one of the smallest schools.  Everyone got playing time – – we brought the 9th graders up.  We’re battle ready.” 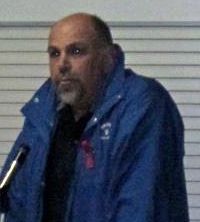 In contrast to the lengthy experience of Coach “Perc,” Simon Dudar, the new Girls Tennis Coach, had “never watched a game” before being asked to step in.  He added, “neither had half of the girls on the team!”  That was way back in summer.  By the end of the fall season, they had amazingly gone undefeated, won their league, and the Conference Championships.  Dudar credited Team Captain Molly Prins as a big reason for the success.  He also acknowledged Haldane parent and Board Member Joe Curto’s donation of a lot of tennis equipment.  In closing, Dudar noted, “I can’t say enough about these girls.  I hope that they all come out next year.”
Cross-Country (Boys and Girls) Coach Tom Locasio said that he was going to “make it quick – – there are some donuts left, and I’ve got my eye on about four of them.”  Turning his attention away from his stomach, he reflected on the recent past, “We’ve won three Sectionals in a row, boys and girls.  How did I do that?  You’ve got to have good athletes. I’ve had the luck of having two unbelievable runners, Paul Mackey and Ed Bohl.  These two guys taught the rest of us about hard work. You need good leadership, and great 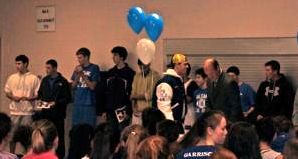 The football team receives their awards

parents.  I’ve had the best parents – – they’re so nice to me.  You’ve got to have competition amongst each other.”  With 35 team members competing for 7 slots at the meets, “you had to work hard to be one of the seven best.”  Saying that he wanted to “make it mean something” to get a Varsity Letter, Locasio chose to award the Letters to just his “top seven guys, four alternates, and six girls.”
Last up was Girls Volleyball coach Melissa Rossano.  The volleyball squad was the only team whose season hasn’t ended yet; they were heading to States later in the week. Noting that the team “won Regionals last Thursday,” Rossano said that she was “really excited for these girls to be going to States,” adding that she remembered her own experiences doing the same at Haldane. Athletic Director Cunningham brought the evening to a close, telling the packed room “It’s been a fun season, and it’s a great future right here.” 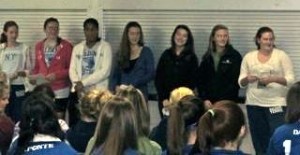 Members of the tennis team

The Booster Club is always seeking new members. Members can simply contribute to the funding or become more involved by participating in the meetings, which take place at 7:30 p.m. on the second Monday of each month throughout the year, usually in room 105.  For more information, contact Dan Hughes at 845-265-5569 or dhughes [at] kuikenbrothers [dot] com.

The Haldane Girls Volleyball team participated in States this weekend, and came in second in the state, losing in their last game.  Hey, that’s second in the whole great state of New York!