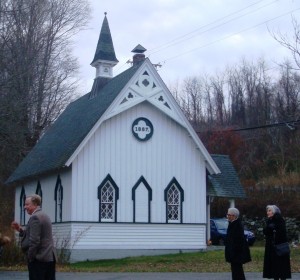 With the sun setting behind overcast skies on Sunday, Nov. 21, members of the Putnam County Historical Society (PCHS) and their guests entered the MeKeel’s Corners Chapel for the 52nd annual Thanksgiving Candlelight Service. Lit only by candles on the walls and heated by a pot-bellied stove, participants were cast back to an earlier time. The only concessions to the 21st century were the electronic keyboard played by Elizabeth Ailes and the cars that brought people to the chapel.
The program began with a prelude by Ms. Ailes and was followed by a welcome from PCHS President Neal Zuckerman and an invocation by Edward Cleary, chairman of MeKeel’s Corners Chapel. Hymns alternated with readings from Washington’s Thanksgiving Proclamation, President Obama’s 2009 Thanksgiving proclamation, and a history of the chapel.
Built in 1867 on land donated by Thomas and Susan Mekeel and James Smith, the MeKeel’s 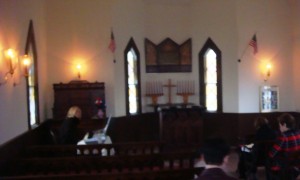 Corners Chapel operated as a Methodist chapel until the middle of the 20th century when the congregation disbanded. In 1949, the chapel, which had fallen into disrepair, was rescued and restored by Helen Fahnestock Hubbard, whose property adjoined the chapel. In 1990, a new Chapel Association Board of Trustees was formed. The Board continues to maintain the chapel and one of its trustees is the grandson of Mrs. Hubbard, Clarence Fahnestock Michallis.
The service concluded with a benediction from Cleary and postlude played by Ailes.