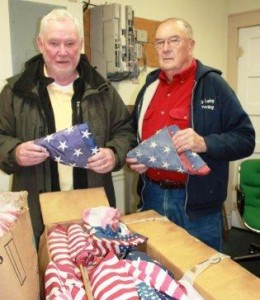 Ed Murphy (left), US Army Command Sargent Major (retired) and Terry Lahey, Commander of the American Legion in Cold Spring, take a close look at the growing collection of US flags at the Village Hall.

Sometimes it’s the right thing to do

There are people in Cold Spring who want to burn the American flag. In fact they consider it their patriotic duty. This is not a story about desecrating the U.S. flag as a political protest. Rather, it is about people who want to retire old American flags in a proper and dignified manner after the flags have reached the end of their serviceable lives.

For at least the past year, a collection of old, worn and tattered US flags has been growing in the basement of the Cold Spring Village Hall. Two large cardboard boxes contain more than two dozen flags in a variety of sizes from very small to quite large. Village Clerk Mary Saari said that some of the flags have been used by the Village itself while others have been brought in by area residents who may have been unsure of how to dispose of them.

What should be done with the flags is clear. How to accomplish that has posed a challenge at times. According to the US Code, compiled by the Office of the Law Revision Counsel of the United States House of Representatives, “When a flag is so worn it is no longer fit to serve as a symbol of our country, it should be destroyed by burning in a dignified manner.” United-States-flag.com adds that “burning signifies purification and rebirth.”

Cold Spring resident Francis (Terry) Lahey served in Korea as a Sergeant First Class with the Army Combat Engineers and is now the Commander of the American Legion, George E. Casey Post 275 in Cold Spring. Lahey said that a few years ago, “We used to retire the flags in a ceremony near the Village truck yard on Flag Day. Both the VFW and American Legion took part. But someone complained to the Village board about the odor.” The ceremony hasn’t been held there since.

Odor can be an issue especially when it comes to nylon flags. United-States-flag.com states that “Nylon flags create hazardous gases when they are burned. Many states have outlawed the burning of nylon for that reason.” The website goes on to say that while burning is the preferred method, it is also acceptable to seal an old flag in a box or bag and bury it. “The most important factor is showing respect to the flag during its disposal.” Phil Schatzle, Commander of the James Harvey Hustis VFW Post 2362 in Cold Spring, wasn’t happy that the Village yard ceremony was abandoned because of one complaint. “I was disappointed no one spoke up. One person shouldn’t have that much say.”

What’s a village to do with its dozens of old flags?

Enter Cold Spring Cub Scout Pack 137.  Cub Master Gary Gunther uses the flag retirement ceremony to teach kids about flag etiquette and respect for the flag. “We do a ceremony once in a while at Pack meetings.” Ceremonies are often held at either the Garrison Fish and Game Club or the Durland Scout Reservation in Putnam Valley. When he learned of the Village’s “flag problem” he offered the services of his Cub Pack. “I’m going to pick up all the flags on Friday.”

Gunther said that they will begin to retire the flags at meetings over the next few weeks. Cold Spring Mayor Seth Gallagher is grateful for the help. “I think it’s a very good thing for the Scouts to get involved” he said. Ed Murphy, US Army Command Sergeant Major (retired) agreed. “It’s a patriotic act for the Scouts to take on. And it’s good that there are still people who are willing to step up and keep the tradition going.”

Schatzle has some advice for people who haven’t checked their American flag lately. “A lot of people should take a close look at ‘Old Glory’ and realize that it’s not in any condition to be on display.”  One place where the flag is very prominent locally is the Cold Spring Cemetery on Peekskill Road. One thousand veterans are buried there. Schatzle said that US Army veteran Joe Etta, who two years ago received the French Jubilee Medal for his participation in the D-Day invasion at Normandy, has placed American flags on veterans’ graves there for the past 62 years.

Needless to say, Schatzle is also very pleased to see the Cub Scouts helping out. “I’m really glad the Scouts are involved and that the flags will be retired in a proper ceremony in an honorable manner” he said.