Cold Spring By Candlelight, the annual early December event which heralds the holiday season here in Philipstown, seems to have been around forever, a tradition of the town.  In reality, the picture postcard proceedings have only been around for seven years, and the idea was hatched not by Village elders, huddled ’round the embers at the Foundry, but by Cold Spring’s Rand Otten, albeit by the flickering flames of that oldest of local inns, the Bird and Bottle.

Back in November 2002, Otten, who was then director of the Cold Spring Area Chamber of Commerce, was attending a Chamber mixer at the Bird and Bottle, when an idea came to her: “As many of us gathered in that beautiful room with the fireplace, I thought what if Cold Spring turned down the lights one night a year?”

This notion took hold, and over the course of the next year, Otten fleshed out the spark of an idea with the reality of putting the pieces together behind the concept. It all tied together with her job and passion: she is the Director of Development at PARC, a Brewster-based nonprofit which is, according to their website, “at the forefront in providing advocacy and programming for children and adults with developmental disabilities within the geographic region of Putnam County along with Northern Westchester and Southern Dutchess counties.”

Otten, who grew up in Garrison, had several goals in mind when she conceived of the program: “Having had the opportunity to grow up in this area, I wanted to serve the community by coming up with a destination event for the holiday season.  And I wanted to raise the profile of my nonprofit.  This has become an event which has fulfilled this mission.” 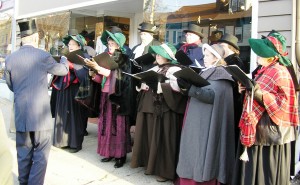 Cold Spring By Candlelight is an afternoon-long event, which begins at noon (although attendees can start later) and extends until after dark.  Historic homes and sites are open to the ticket-buying public; there is also holiday caroling, discounts at local stores and restaurants, visits with Old St. Nick, and more. Great as the initial idea was, it hasn’t always been smooth sailing.  The very first year, 2003, wasn’t really the first year at all—18 inches of snow blindsided the town.  Recovery by the next day was impossible, and the entire inaugural event had to be canceled, after a year of planning. Undaunted, work began, as it always does, right after the canceled event, and 2004 came off without a hitch.

Yes, planning for the next year begins “about a week” after the event is over.  The critical component is locating and confirming homeowners.  Otten starts things off by “hitting my list,” of homeowners who were approached and expressed interest, but due to renovations, or travel or whatever, were unable to participate the previous year.  Otten is honest about the difficulties involved, “It’s never easy convincing homeowners.  It’s a tough ask.  We’re asking people to get their homes decorated three weeks before Christmas, and to open their doors to the public for five hours in a meet and greet. We know it’s not easy.  We do offer various incentives, because we want to let homeowners know how much we appreciate them.”

It may not be easy, but most of the homeowners truly enjoy the experience.  Many sign on to do it again. As Otten puts it, “after 8 years, there are bound to be some repeats, which is fun.  The Villages of Cold Spring and Nelsonville are small places.”

The only stipulations are that homes must be located within these Villages, and must be “dressed and ready” by the first weekend in December.  Some people open up their entire home, others opt for first floor only.  The homes needn’t be “fancy estates” — according to Otten, “really it’s about the spirit, and how the owners embrace the spirit.” 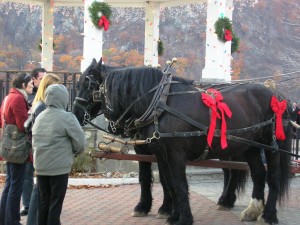 As an example Otten mentions a home on Kemble Avenue, which was voted the favorite of the visitors a few years ago. “It was a small, historic, cottage.  People adored their renovations and the love they put into it.  It wasn’t the biggest or the grandest, but it had the holiday spirit.”

John Allison, with his wife Susie the owners of this home, was enthusiastic about their participation on the tour: “Being a part of the Cold Spring by Candlelight tour was a real pleasure. The guests were, without fail, friendly, considerate of our home, and appreciative of our efforts. Rand and the PARC staff had everything well-organized, and they made sure we were comfortable and taken care of during the event. It was a great experience!”

Cathryn Fadde (of Cathryn’s Tuscan Grill) will be opening her High Street doors to the public for the third go-round this year. Fadde is happy to do so, “It’s an event that I really, really believe in.  I think that the mission of PARC is a great one, and I want to support it. The people who come to visit your house are really respectful in your home.  It’s a nice way to start the holidays—to do something for somebody else.”

It’s not only the homeowners who sometimes repeat — it’s the attendees.  Many come back year after year. Comment cards reflect their enjoyment of the day. When the event began, the focus was much more local, with most ticket buyers coming from Philipstown.  “The culture of the event has changed quite a lot,” says Otten.

In 2008 approximately 800 tickets were sold; in 2009, perhaps reflecting the economic downtown, the count was approximately 600.  Visitors now come from throughout the tri-state region, and a reservation was just received from Vermont.  The event is now a destination in and of itself. 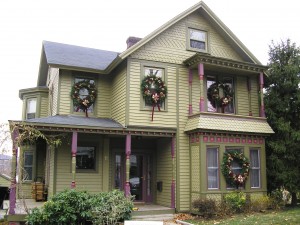 Over the past three years the program raised over $50,000 for PARC, with Otten noting “It’s been a powerful force for my organization.”

The funds raised are administered by Partners in PARC, a private foundation which serves as the fundraising arm to PARC, which is otherwise funded by New York State. Otten explains, “We don’t know what the financial climate from the State will be from year to year, so Partners in PARC helps to secure funds to be used in the future.” PARC, which serves 650 people each year, is the third largest employer in Putnam County, with approximately 450 workers.  Amongst the many services PARC provides are:

PARC also offers many volunteer opportunities, throughout the year.  For an interesting and detailed history of PARC’s place in Putnam County, visit putnamarc.org. This year’s Cold Spring by Candlelight will take place on Saturday, Dec. 4, rain or shine, from 12 noon until 6 p.m.