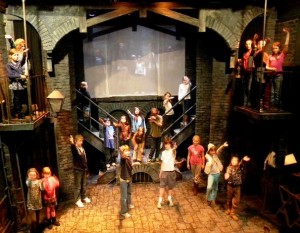 What the story means to the young actors

The thing about old chestnuts is that, like hope, they spring eternal again and again for the young.  Most of the young people who are performing in the Depot Youth Theatre’s production of A Christmas Carol this season were already familiar with the story, even at their ages.  Mainstay of the holidays, it still has the power to use the lure of its draw-you-in plotline and the ache of its emotional epiphanies to bring that old lump in the throat back once again, as if you’ve never read or seen it before, even as you know what that wonderful ending will be.

The cast of 27 local kids has been rehearsing for months now with their director, Depot Youth Theatre coordinator Jenn Lee.  They have the good luck of performing on the amazing Threepenny Opera set designed by Chris Nowak, which conveniently took place during the same era in London.  And in this season of bounty, they will also be enjoying the professional expertise of lighting by Donald Kimmel, and costumes by Charlotte Palmer.  Amy Dul and Alec Lane are assisting with the production, which opens this Friday, Dec. 3. 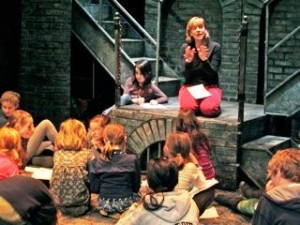 Here then, are the voices of some of the cast members, who range in age from fourth to eighth grade, on what A Christmas Carol, and the experience of performing in it, means to them: (Printed in the order they were received by Phillipstown.info)

Emily McDermott:  What A Christmas Carol means to me is that you have to be kind, considerate and caring to others.  And most of all that money isn’t everything!!!

Freya Wood-Gallagher: Acting. I love it. It let’s me express myself. Like, for example, if you’re sad you cry, if you’re happy you smile, and if YOU want to be really happy you will come see A CHRISTMAS CAROL. You will laugh, cry and maybe even scream or jump in terror!  ENJOY! 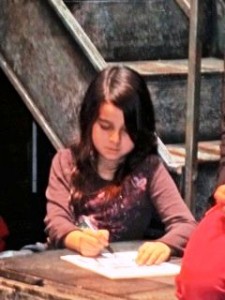 Diligently writing down the notes at rehearsal

Cate Kanlong: A Christmas Carol is about a wretched old man who learns to love and care for people again. It makes me feel excited that I’m with my family on Christmas and spend time with them.

Andrew Platt: Being in A Christmas Carol is very important to me.  Jenn is a lot of fun to work with and the cast is the best!  It has been a fun experience being in this show because I have been scared of this story ever since I was a little kid.  Now I can appreciate the story and what the ghosts are trying to teach Scrooge.  I hope lots of people will come and see the show.  I think they will truly enjoy it.

Lucy Austin: Even though I had known about the story before, it is so much more meaningful to me than ever.  The theme is to bring people together and to spend your life around the people who love you.  I have spent time in these past weeks with amazing people, and I think this will make that theme more vibrant in the show.  When you actually get to be someone it makes you think more about who they are and what they’re struggling with.  There are characters who you wouldn’t really think about, but if you see them as an actor, you can see it from their point of view.

Nolan Shea: A Christmas Carol reminds me of the real meaning behind Christmas.  Christmas is about a time where people from all different backgrounds come together to celebrate what’s most important to them.  What’s most important to me is spending time with my family. [Editor’s note: Nolan Shea portrays Scrooge.  Sounds like Scrooge has learned a thing or two even before the opening of the show!] 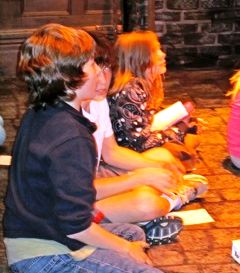 Listening closely to the director

Ronan Wood-Gallagher: I think that the Christmas Carol is trying to say that even in the most evilist people there is a spark of good – like the yin-yang.

Jocelyn Lane: I think the story means… It is nice to have a lot of money but it is not fun unless you share it.

Harper Levy: A Christmas Carol means to me to always to give and be kind to others. A Christmas Carol has been very fun for me because now as the show is getting closer, I get to see my friends from other schools more often. I also really like the story of A Christmas Carol because of all the crazy characters and all the fascinating scenes.