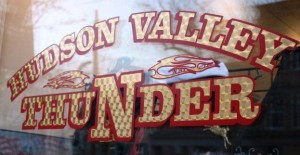 A prominent theme in the new comprehensive plan being written for Cold Spring is the need for a vibrant Main Street – vibrancy that could be enhanced by a greater variety of retail businesses. Hudson Valley Thunder, a shop that opened at 65 Main Street on November 30 may be one step in that direction. “You could hear a collective sigh of relief when I moved in. People were happy I wasn’t an antique shop or a cafe or coffee shop” says co-owner Jim Lovegrove. He describes Hudson Valley Thunder’s product line as “motorcycle and counter-culture apparel” that includes shirts, outerwear, leather jackets, vests, jewelry, handbags and belts.

At first glance the new Main Street shop has Harley Davidson written all over it but Lovegrove says that’s not the case. He stocks boots and other “cross over” items that he says will also appeal to riders of other motorcycle brands. “I’m not necessarily looking at just the motorcycle market here. This is a wide brand. You don’t have to be a rider to like this stuff – you just have to be on the edge.”

This is Lovegrove’s second retail operation. He ran a t-shirt shop in the past and hopes his new venture can take a page from another very successful Hudson Valley business – Newburgh’s Orange County Choppers. While that shop is famous for building custom motorcycles he says,” The money is in the t-shirts. People go there by the busload.” Lovegrove wanted to start operating from a trailer at music festivals, car shows and “anywhere I could park the trailer.” But Easy Riders, his major supplier, said no dice. The supplier insists on a storefront and he is now happy with that business strategy. “The storefront will make us that much more successful – with people coming up Main Street from the train.” Hudson Valley Thunder still plans to hit the road with a retail trailer in the future. 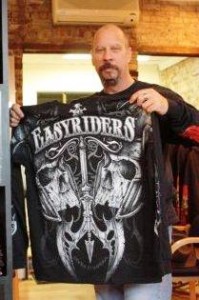 Lovegrove is no stranger to sales and marketing. “I spent my whole life in automotive retail including running the world’s largest Chevy store.” He managed the sales department at a Chevrolet dealership that was ranked 150th in the country. In just three years it rose to number one. “I like to think I had something to do with that” he says. Sometimes success can be built on seemingly very small details. “The first thing I did there was to install a popcorn machine. It was a familiar, friendly, pleasant smell. People would take a bag of popcorn and then relax, sit and talk.” There will be no popcorn machine at his new shop. “I don’t want to interfere with local cafes and coffee shops” he said.

Local civic and business leaders may well want to speak to Lovegrove about his business model. He adopted the theme “Whatever it takes” as the Chevy dealership’s motto and brought in National Football League personalities Emmett Smith and Joe Gibbs to speak to employees about the importance of teamwork. He also insisted they all read, “Who Moved My Cheese” – a book about dealing with change. “You can either embrace change or get left behind” Lovegrove says. Trends in motorcycle and counter-culture apparel tend to be cyclical. “Right now Ed Hardy is hot” Lovegrove says. That brand includes a line of fashion, jewelry and purses that all feature a “tattoo look.”  He also stocks a number of motorcycle magazines including V-Twin and Tattoo. Similar shops often carry magazines that contain nudity however they won’t be found on the shelves at Hudson Valley Thunder.

His first week in business had a few surprises. “It’s ironic. The things I didn’t think would sell have sold first – like our sunglasses” Lovegrove said. Many businesses frame the first dollar they take in but he prefers to talk about his first customer. “She was from Nelsonville. She saw a beautiful shirt with sequined wings embroidered on the back that we had displayed in the window. She researched it online – and then came right in and bought it.” Lovegrove believes he couldn’t be in just any business. “Two years ago I was asked what I would do if I had all the money in the world. I said I’d start this business. Riding has always been my passion.” That passion is reflected in an interesting artifact that was added to the shop during its first week of operation: a shiny, black, 500 pound motorcycle. It was built at Phat Custom Cycles on Route 9 and now sits atop one of the clothes racks. 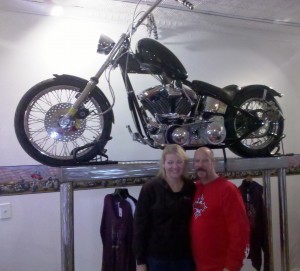 Jim Lovegrove and his partner Holly Flannery in their new shop

But why set up shop in Cold Spring? Lovegrove isn’t exactly a “Springer” whose great-grandparents are buried here. “I met a wonderful woman from here – online. We were two of 850 people playing the same video game. The first time I was in Cold Spring was last October and I moved here in March. We’re now equal partners in this.” Love may have brought him to Cold Spring but Lovegrove is also enamored by the village itself and thinks his business will fit in well. “I love that the village looks like a turn-of-the-century town. It’s always going to be a niche location. Harley Davidson is now 107 years old. We try to harken back to that time and keep that look in mind in our marketing.” The reaction of most local residents has been encouraging. “The support I’ve received has been phenomenal. If good wishes were money I’d be filthy rich now” Lovegrove said. He also looked at the Main Street storefront where Frozenberry is now located but met some resistance to the idea of having his shop on such a high-profile corner. The toughest aspect of opening his shop has been the timing. “Winter wasn’t when I wanted to open but I didn’t want to lose this building” Lovegrove said. “The brick wall is 100% of the character of this building. That, the floor, the structure and the village itself are warm. They invite people to come in.”

Some people worried that the shop would bring more motorcycles to town but he was ready for that comment. “I’m serving a community that’s already here. And the bikes will come whether I’m here or not” he says. Lovegrove thinks that motorcycle riders are often unfairly typecast. “Just because I have facial hair and ride a motorcycled doesn’t mean I’m a bad person. As for the noise, people can’t see motorcycles very well but they can hear us. The noise helps keep us safe.”  On the other hand he says that bikers “…absolutely love Cold Spring. It’s biker friendly. Some people may not like the noise but they love the money bikers spend here.”

Lovegrove has already joined the Cold Spring Fire Department in his words, “to give something back to the community. The training is hard and the hours are bad – but it’s one of the best things I’ve ever done. And the connections you make in the fire department are amazing.” He has also joined the Chamber of Commerce. The forty-seven year old Lovegrove has taken up residence in Nelsonville but lived most of his life in Arizona. His later years there were not happy ones. “I lost everything in Arizona. It was a dark period of my life. This is the start of a whole new life. I’m just happy to be here.”

You can visit Hudson Valley Thunder at 65 Main Street or check out Cold Spring’s newest business online at www.hudsonvalleythunder.com.

One thought on “'Thunder' in Cold Spring”