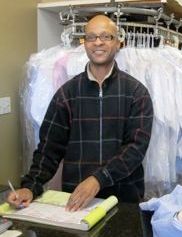 Is there someone in one of our local stores or businesses who always make you feel welcome, or well taken care of?  In Philipstown, we often interact daily with people we don’t know much about, but whose company we briefly enjoy. This is the third in a series of stories about that interesting person “Behind The Counter.”

David Bass, the proprietor and resident wit at Cold Spring’s Grand Dry Cleaners has some big surprises right off the bat, at the start of the interview.  Asked whether he always intended to take over the 27-year-old business, run for most of those years by his much-loved father, Henry, he says, in a word, “No.”  His explanation follows: “I wear many hats: attorney for one. My ultimate goal is start my own church. A non-denominational Christian church. With the economy the way it is, I’m having to be here more than originally planned, but as it gets better, I can delegate to staff and pursue other interests.” More on both of these hats later, but for here and now, there is the family business to run..

What is dry cleaning, exactly?

It’s a business that David Bass knows backwards and forwards.  Here are his opening arguments on what dry cleaning is, and why Grand Dry Cleaning is good at it: 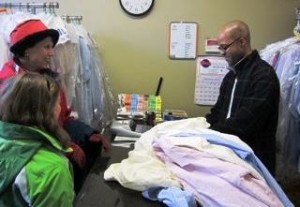 Customer Lauren Haines and her daughter bring in some shirts

Cleaning means your clothes lose their problems – be it odors, dirt, stains, whatever.  This cleaning happens not with liquid. Well, actually it is a liquid, perchloroethylene, commonly called “perc” by those in the know, but the liquid contains no water.  Water causes a garment to lose its texture, shape, size.  So this helps maintain the garment better than water.  A lot of “green” cleaners are “green” because they are using water, but water doesn’t clean as well, and they are actually adding things like bleach, which are not green. We recycle bags and hangers to respect the environment.

In a convincing argument, attorney/proprietor Bass goes on to describe some of the features specific to Grand Dry Cleaners, “We do all of the dry cleaning ‘in house.'” We send out only the laundered shirts and the tailoring because we just don’t have the physical space to do those things here.  This distinguishes us from “drop” stores, with just a counter person.  It’s also why we can turn it around fast.  We do high-end items: couture, wedding gowns.  We also do lots of uniforms.  A big difference between us and the newer cleaners is that I do all of the cleaning myself, so that when I am addressing the customer re: stains or fabrication, I can take note of things like leather details that could cause problems.  I can preclude problems which might arise.”  The Thursday afternoon interview is punctuated with the arrival of customers:

Bass, indicating pile of garments: “I can tell these are yours, because they are purple.”

Customer: “Can I get the pants for Saturday?”

The history and mystery of dry cleaning

Bass says that the business hasn’t changed all that much through the years. “It’s pretty much the same process, just fine-tuned with advances in machinery and subtle changes.” One big difference, specific to these lean times is that “Everybody here [in these local businesses] is working more hours.  If you look at these stores, it’s the people who help the owner who are being laid off. The owner is putting in more time.”

The huge February, 2002, fire at the nearby Grand Union (now Foodtown), affected all of the neighboring establishments, including Grand Dry Cleaners, but Bass praised another business owner in the plaza, Louis Grasso, of Cold Spring Lawnmower and Tractor Service, for saving the day, 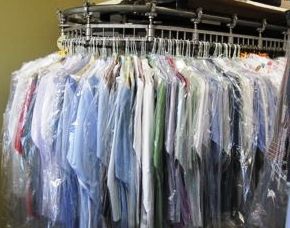 The racks are usually full

“We did not have a lot of internal damage, but of course we couldn’t use the store.  Louis Grasso helped considerably; we used the front of his store.  But for him we would have had to shut down. We’ve often worked on clothes damaged by fire and smoke, and it’s good to be of help in that situation.”

What’s the strangest thing that’s ever been brought in for cleaning?  Bass ponders, and then comes up with “An antique car got paint on one of the seats in the car.  Utilizing our mobile dry cleaning kit we were able to get in there and get the paint off.”

And what of those mysterious, arcane, color-coded dry cleaning tags – what is the secret key to them all? Bass reveals, “The color indicates the day of the week that the clothes are due.  Also to whom the clothes belong and what cleaning process they want.”  More puzzles: the sign in the front with some customers’ names on it?  That indicates garments which are too long or bulky to be stored on the racks.  Racks which Bass says he never played with as a child, which is hard to believe, given his mischievous sense of humor. Witness this exchange, duly recorded by this dry cleaning reporter:

Bass to customer: Do you want the regular or the V.I.P. treatment”

Customer: Then I’ll take the V.I.P.

What’s Henry Bass up to?

David Bass knows that one of the big reasons for the success of this long-standing business is his father, Henry, who ran the establishment for nearly 25 years, after buying what was an existing business from someone else. “With Henry, his forte was his personality.  Some people are good at what they do, but are curt with customers.  Or vice versa.  With Henry it was advantageous that he could do both.”

Henry, whose almost daily presence in Cold Spring is missed by many, still pops in occasionally.  But now “He’s trying to catch the biggest fish.  He travels to see his family in Florida.  It’s a transition period for him and he’s trying to find things to occupy his interests.  Fighting boredom is the biggest task,” says his son. 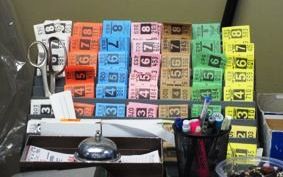 Tools of the trade

David Bass, too, will be missed once, as he hopes, the economy picks up and he relies more on staff again to run the store.  That’s the plan, “The people who have been assisting are still around – they will just be here more often.” It won’t be a return to full time lawyering for the younger Bass, although “I plan on occasionally doing a case here and there because I like the courtroom experience.”  But his main goal beyond maintaining the business his father ran for so many years is to establish his church.  He has a place in mind, but “mums the word.  You’ll see the word when I’m ready!”

In summation
So what are some of those little details which can sway a jury towards bringing their dry cleaning to Grand?  Bass’s summation: “We do replacement costs for lost or damaged clothes.  It’s a rare occurrence, but when it happens, there’s no haggling. Also, Wednesday is Customer Appreciation Day and every fourth item is free,”says Bass.  Most importantly, though, he says, “The good thing about frequenting a certain business regularly is that the business learns your wants and desires.  I can tell if I see a pile of clothes what belongs to who and how they want their clothes presented, and that’s a plus.”

2 thoughts on “Behind the Counter: David Bass at Grand Dry Cleaners”