Historian for Town of Philipstown and Village of Cold Spring

Donald MacDonald is the quiet-spoken historian for both the Town of Philipstown and Village of Cold Spring. He has seen a bit of history himself and definitely has his views on the subject. But mainly he just loves history and loves writing about it. Philipstown.info’s Michael Turton sat down with him for a Q & A at our office on Dec. 15, 2010. Their conversation has been condensed and edited. Mr. MacDonald also writes a monthly history column for the Putnam County News and Recorder.

Philipstown.info: Do you have an educational background or training in history?
MacDonald: No, just grade school and two years of high school. I don’t know when exactly I acquired my interest in history.

Philipstown.info: What aspects of history interest you most?
MacDonald: I never could get into European history. I had a hard time with it in school. But American history I could get my teeth into. I liked it.

Philipstown.info: How long have you been Town Historian?
MacDonald: I was originally asked by the Village of Cold Spring to be their historian in 1985. Then in 1987 Philipstown asked me. No one has ever had the answer about why there are two positions. The village is inside the town. It’s all one place. All one history.

Philipstown.info: Do you get paid?
MacDonald: Philipstown pays me for postage, gas and phone calls. But I don’t get a salary.

Philipstown.info: What do you consider to be the three most significant stories in local history?
MacDonald: First would be the West Point Foundry. Many people don’t realize that Cold Spring came about as a direct result of that foundry. Second would be the creation of the Philipstown Turnpike in 1815. It was a major highway, a toll road that went all the way from the Cold Spring dock to Milford Connecticut. Parts of today’s Route 301 were also part of the turnpike.  And third would be Emily Warren Roebling, the wife of Washington Roebling. She took over the construction of the Brooklyn Bridge when he became to ill to do it. I could talk about her all night. She was a powerful person in the construction of that bridge. 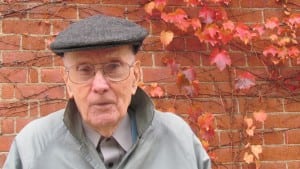 Philipstown.info: What about George Washington and his famous drink from the cold spring?
MacDonald: He may have taken that drink but we didn’t take our name from it. It’s documented that a “precinct meeting” held in 1772 refers to Cold Spring and that predates Washington’s visit. Many schooners, barges and boats traveling from New York City to Albany used to stop at the Cold Spring dock to refill their casks because it was known for its cold, fresh, spring water –  20 or 30 years before the Revolutionary War.

Philipstown.info: Where did you grow up?
MacDonald: I was born in Peekskill and came to Garrison in the mid 1930’s. It was a 4-room school when I went there. I moved to Cold Spring in 1964.

Philipstown.info: Did you go to Haldane?
MacDonald: For two years. I quit in 10th grade. I’m proud that 35 years later I got my GED. I worked like a sucker to get it.

Philipstown.info: What did you do to earn a living?
MacDonald: I was in the Navy in World War II. After that I worked for a contractor. And I worked with my father for 20 years in the furniture business. My primary trade was refinishing. After my father died I had to give up the business and I went work for BOCES as a custodian for one of their large buildings. It was the best job I ever had.

Philipstown.info: Do you think the schools do a good job of teaching American history today?
MacDonald: From what I have seen I would have to say that the schools are very destitute when it comes to American history. But I think the necessity for history is making a comeback. There is a definite need for it in our school system.

Philipstown.info: Can you explain why two villages – Nelsonville and Cold Spring – were established right next to each other?
MacDonald: I can’t help you at all on that. In the time I’ve been here there has always seemed to be friction between the two villages. Conflict. I’m sure it [the establishment of two villages] was politically motivated.

Philipstown.info: There’s a saying that it’s the victors who get to write history. Do you think that’s true?
MacDonald: I don’t necessarily go along with that. I think the fact that we have wars is itself history. I don’t think anyone wins a war.

Philipstown.info: I think Winston Churchill is credited with saying that if we don’t learn from history we are doomed to repeat it. Do you go along with that one?
MacDonald: I would agree with that. It’s a great line. If we don’t have a barometer from the past it’s going to be very difficult heading into the future. I have a great deal of admiration for that man.

Philipstown.info: Do you have any special projects on the back burner that you still want to write about?
MacDonald: I’m beginning to run out of local history! I have to give some serious thought to how much longer I can continue doing this. I do like to write my articles and I try to make them as authentic as I can. It can be difficult. You read different sources – and they each say different things.

Philipstown.info: Are you involved with the Putnam County Historical Society and Foundry School Museum?
MacDonald: Mostly in the sense of being a dues-paying member and I give a talk there once in a while.  They did talk me into displaying a lot of my writing. I didn’t want to do it – I was being selfish about it. I didn’t want the publicity. But I’m glad I did it.

Philipstown.info: What’s your favorite book of all time?
MacDonald: Gone With the Wind. It was a glorified soap opera but it had everything and it was very well done.

Philipstown.info: What historic site or area has impressed you most?
MacDonald: Boston. Mary and I went there for our honeymoon. There’s so much history there. It kind of took the cake emotionally. It rained almost every day we were there. I wanted to see Fenway Park but we never did get there. Gettysburg impressed me as well.

Philipstown.info: If you could go back to any time in history as a fly on the wall, what would you choose?
MacDonald: I would love to have lived either during the Revolutionary War or the Civil War.

Philipstown.info: Do you have a computer, cell phone or answering machine?
MacDonald: None! I’m 85. Why go to all the bother? I love doing my research – my way.

Philipstown.info: What’s your favorite pizza?
MacDonald: I don’t like pizza. But I really like other good Italian food.