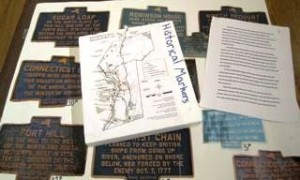 A project on this area's Historical Markers

Keeping it very local is one of the stipulations

Areas as small as Philipstown rarely provide fertile grounds for a history competition in which keeping it very local is one of the stipulations.  The seventh graders from Garrison and Cold Spring who participate each year in the Putnam County Historical Society’s (PCHS) Jean Saunders History Competition are lucky to have such an abundance of nearby riches from which to choose their topics. After approximately 25 years, you would think that there would be an endless repetition of subject matter.  That was definitely not the case this year, according to the Historic Society staff members and judges who supervised and evaluated the competition.  A hallmark of this year’s entrants (39 students participated, generating 24 projects; some students paired up), was the abundance of unique and never-done-before topics. 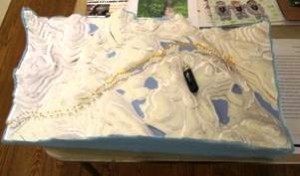 A topographical model was an entry this year

Mindy Krazmien, PCHS Executive Director, spoke of what this region has to offer the student of history in her remarks to the crowd of parents and students assembled for the reception and award ceremony held on Wednesday evening at the Museum. After noting “how much work this is for the students,” she described the core of the projects as “finding out what has been going on in this small but important part of the world for the past couple of hundred years.  You are growing up in an area rich with history.”  Krazmien acknowledged the efforts and support of Garrison social studies teacher Ms. Foppiano, Haldane social studies teacher Mrs. Brocker and Haldane Elementary and Middle School Principal Mrs. Davis, all of whom were in attendance. 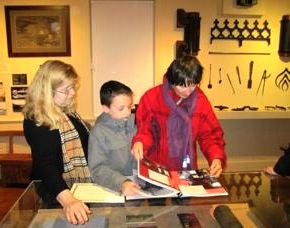 GUFS teacher Ms. Foppiano, student, parent look at one of the entries

The annual competition, which this year was switched from the spring to late fall in hopes of finding a slightly less packed time of year for the students, begins with a visit to seventh grade classrooms at both Garrison Union Free School and Haldane by Kendall Ingenito, the Outreach Coordinator.  She discusses the stipulations of the contest, which include that everything must relate to either Philipstown or the Hudson Highlands; all sources must be cited, and a bibliography provided; and that a “paper component” is required, along with whatever other form the student decides to work within.  The formats submitted this year included websites created by the students, architectural and topographical models, videos, as well as more traditional essays, posters and research papers.  The submissions are judged with a rubric consisting of:

Participation in the competition is mandatory for Garrison students, but optional for Haldane students.  Haldane used to require participation as well, but this was changed a number of years back. Maggie Davis believes (it was before she began as Principal) the Haldane administration at the time was concerned with compliance with mandated State Standards and Assessments relating to the Social Studies curriculum. The Contest doesn’t necessarily align with the New York State 7th grade Social Studies curriculum, and thus “Students completing the projects could be working on a wide range of topics that might be more focused on the Civil War and teachers have to make sure that the content is covered within the time frame set by the State Education Department.  This leaves less time to support projects in class like the Jean Saunders Contest.” 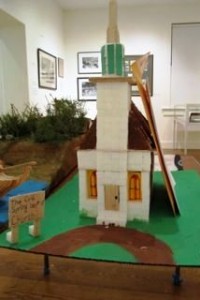 A model of the Cold Spring Baptist Church

This year’s judges were Donna Cotennec, Charlotte Eaton, Heather Fitzgerald, Mayor Seth Gallagher and Janet Rust.  Some of these judges have presided many times before, and were especially pleased at the variety of new topics covered this year, mentioning projects on the Great Depression and its effect locally; the Continental Road, and the Warner sisters as subjects either never or rarely seen before.  In discussing Anna Birn and Grace Carroll’s Great Depression project, Kendall Ingenito spoke of her misgivings at the beginning, “I wasn’t sure there was going to be enough for them [on the topic].  But the students came in and used the old Putnam County News and Recorder microfilms; they spoke with [town historian and longtime resident] Donald MacDonald and [also a longtime resident] Libby Healy, who gave personal insights.”

Ingenito commented on some of the other submissions: “We got tons of models, a video game, a board game.  The judges were blown away by the video game!”  Addressing the students, PCHS Director Krazmien spoke of the judge’s process, “We go through each of the projects with a curator and we actually record materials for our own archives.  People in the future may use your work.”  All of the projects are judged anonymously, as submissions are accepted only with names written on the backs of the accompanying papers. 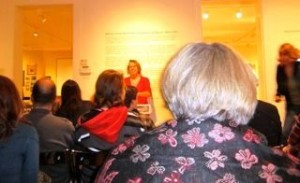 Announcing the awards, Ingenito noted that, “it was very competitive; all awards came within a few points of each other.” The contest winner was Haldane’s Lucy Austin, whose topic was “Life of Foundry Worker William Humphrey.”  Second Place went to Ava Adler and Isabella Convertino (GUFS) who covered Garrison’s Landing; Third Place was awarded to Carly Brief and Emma Suits (GUFS) who reported on the Great Chain.  Honorable mentions went to Macdara Heanue and Drew Homola (GUFS) on St. Basil’s; and to Christian Bach and Evan Pohulchuk (Haldane) on the Continental Road.  A special award for creativity was given to Philip DiSarro and Eddie Monroe for their video game, Robo Rocks for Castle Rock and the Great Depression project garnered “Most Original Topic.”

Haldane Principal Maggie Davis thought highly of the contest, “We are very proud of all of our students, and we feel very strongly that students need to know about the town they live in and its history and we continue to support the study of history.”

Garrison’s grade 6 through 8 social studies teacher Ms. Foppiano concurred, “The kids did a spectacular job and the support the PCHS gives the students is amazing. It absolutely gives the kids a greater love of history – a greater passion. I’m sure it correlates into what we do in the classroom.  I’m very proud of them.”  Mrs. Brocker, her counterpart at Haldane, again took note of this year’s unique subject matter, “The projects this year were really different.  The kids focused on what no one had done before.  The students were really into their topics.”

The PCHS will close shortly for the winter, and re-open with a new exhibit in the spring.  To learn more about the museum and its programs, including the Saunders History Contest, visit their website, http://www.pchs-fsm.org/.

Second place winners Ava Adler and Isabella Convertino created a website for the Saunders History Context.  Be sure to view their video clip on the history of Garrison’s Landing by clicking the video icon.

Reporter’s Note: In deciding to cover this story, I was very familiar with, and had great admiration for, the competition. Although my daughter, Lucy Austin, was participating this year, it didn’t occur to me that she might factor in the story.  Unexpectedly, she won.  As this was not revealed until the evening was almost over, there was no way, at that point, of shifting the story to another reporter. Philipstown.info has decided this represents a “co-incidence of interest” not a “conflict of interest.”  Congratulations to all of the participants.
Photos by Alison Rooney