We think we know the score.  Even though we’ve never been on a sound stage, we’ve seen lots of footage of films and television series being shot and know there are long shots and close-ups and different set ups and multiple takes.  But how many of us have actually spent an entire 12-hour day on set, truly experiencing the pace of a shoot, and, more to the point, how many of us have done this from an actor’s perspective? For those of us who have wondered why it can take days to film a two-minute scene, Liz Keifer’s new On Camera Workshop classes provide an obvious answer: in order to tell a visually interesting story, the story needs to be photographed from many perspectives.  In order to serve that story well as an actor, in addition to the acting chops themselves, a great deal of technique is required, knowing when and where to look (and not look), and how best to conserve energy for the slowly-paced, but relentless nature of performing before the cameras.

These new classes, offered by longtime professional actress (and Garrison resident) Liz Keifer, are designed to equip those interested in working in commercials, television or film with a basic knowledge of what to expect when walking into an audition, or during that first day on the job where one is acting in front of a camera.  This includes actors who may have had lengthy careers on stage, but who lack “on camera” experience.

A recent workshop, held at Beacon’s Howland Center, was comprised of both adults and children, and the pairing worked surprisingly well.  The adults had a great deal of stage experience, including Broadway, and wanted to branch out.  The children had a varying range of acting experience, and were both game and very well focused on the day’s exercises. 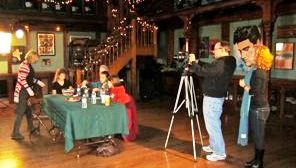 Keifer, who has extensive television, film and commercial credits, finished up a 17-year run on Guiding Light when it ended last year.  Local residents may also know Keifer from the many roles she has played onstage at the Depot Theatre. She is hoping to diversify her career with teaching, and these workshops are the beginning of what she hopes will become an ongoing series encompassing single classes, multi-session classes, and possibly summer programs as well. Keifer loves teaching the classes, saying, “I had no idea exactly how much I knew about film acting until I started teaching. I took for granted what I thought were the most basic ‘rules.’ The excitement from my students after they have filmed their first scene is contagious and I am discovering a love for directing that I never knew existed. I love uncovering new passions in life; it keeps me on my toes.”

The relaxed and encouraging classes began with “slating,” or, as Keifer explained, “getting over the shock of seeing yourself on camera.”  Taking its name from the familiar slate used to announce “action” or “rolling” on a set, slating is essentially a filmed brief, friendly introduction and interview, for, as Keifer noted, “Usually in an audition they are nice and helpful.  They want you to do a good job.”  The slating was simulated in the class, filmed by the director of photography for the day, director and actor Hugh Scully, with the actors given direction by Keifer in how to know where to stand without “looking down at the mark” (a major no).  Keifer’s hints included counting steps backwards from the mark, or finding a piece of furniture as an eye line “something which will help you peripherally “it’s just practice.” Your eye line will shift, and it’s hard not to look into the camera, but try not to “it’s the first sign that someone’s never been on camera before. 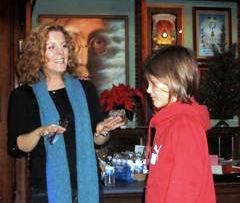 Keifer explains the improv to Elijah

As the participants, each in turn, were guided through the physical motions of the slating: turn to show your profile, bring hands up to your face, front and back, etc., each was asked questions, ranging from the constants: name, height, age (if under 18), sometimes agent’s name, to the more personalized, all designed to bring out each actor’s personality.  As Kiefer explained, “When you’re at an audition and they don’t want you to read, this is what they want to see.  They’re not interested in your resume, but instead the essence of who you are.  Ninety percent of the time you’re typecast, depending on what you look like, and your energy.  But slating can reveal other sides of you – a goody-two-shoes can come off as a vixen.”  Above all, everyone was told, “Never try to be anything you’re not.”

Sometimes people do get cast just from their slate.  It was interesting to watch the kids, in particular, as each came off a bit differently, temperament-wise, on film as opposed to in person.  It was an education on how the camera can transform a persona.  All of the slates were then watched on a monitor, with Keifer noting both the positives, “I’m impressed with how still everyone is; the composure,” and each person’s little tics, where they held tension, from stiff shoulders to “moving disease - to licking lips nervously, to become aware of and try to subdue through concentration. 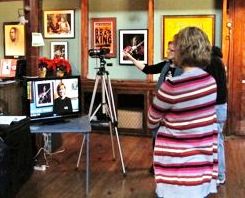 Jenn Lee’s slate is viewed on the monitor

Jenn Lee, a very experienced stage actress, critiqued herself when viewing her slate, “It’s hard to watch how your face moves.  My face moves oddly!”  Keifer countered that, telling Lee “that’s an asset for you.  You want what you think are imperfections.  It’s an interesting way that you speak – don’t eliminate it.”

The class then continued with scene work.  A conflict at a family dinner table scenario was given to the actors to improvise (“improv”), and Keifer whispered a secret about each character to each actor, for them to inject into the scene.  After a couple of rounds of rehearsed improvs, including one in which the actors were urged to try and set all movements and props, the scene was deemed ready for the “master shot.”  It was explained that the master shot was taken to get everyone’s position, that frequently there would be several takes of a master (although not on soaps and on web series, where it’s one take and that’s it), and that the most difficult aspect was repeating a reaction.

Lots of tips, all relating specifically to acting on camera, were dispensed by Keifer: “In terms of action, the key is not to do too much and not to do too little –  look at his downstage eye, because then you’ll get the full two-eyed look for the camera – remember just when you took that napkin! – chin up, eyes down – talk fast, walk slow.” The reason for that last tip being “for the purpose of the camera – the camera has to keep focus and sudden movement can cause blurring, so sit and stand judiciously, not stiffly, but don’t slow your speech down.”

Each actor then was filmed in close-up, often more than once.  As 12-year-old Addie Westerhuis prepared for her second take, Keifer coached her to “make sure you are responding to the person talking, and don’t look into the camera.” Reminding everyone that there is often a half hour or more spent re-setting everything between takes, the key is learning “how to keep it in, relax, get it back.  These are long days.”  Westerhuis was happy she took the class, “Liz is a really good teacher.  I’ve done stage, but I’m really interested in film.  I thought this might feel like being in school on a Saturday, but it was fun.”

The youngest actor-to-be there, 10-year-old Elijah Deroche, was very attentive throughout the three-hour class.  He said afterwards, “I want to become an actor but I haven’t really done acting before.  I heard about this and thought it sounded cool because I wanted to see what it was like.” 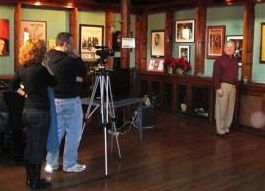 Gerry Butler turns for his profile during his slate

A man of more experience, stage actor Gerry Butler, of Cold Spring, explained why he signed up, “I saw an article on Liz’s class in the paper, and I’m looking to transform from stage to television and this is a wonderful opportunity in a low pressure environment.  It allows me to make some mistakes with someone who has actually done it, and the only way to get the real tricks of the trade is to do it with someone who has been there.”

Keifer’s Mission Statement is: “Acting strengthens one’s social skills, ability to listen, reading skills and self confidence. Whether you are striving for a professional career or looking to develop better social listening and responding skills; looking at your self through the eye of a camera is profoundly rewarding and inspirational. The key to good film acting is finding a level of calm that allows you to feel comfortable in your own skin. I call it my FAT CAT (Film And Television Camera Acting Technique.) Observe a well-fed cat lying on her back licking her paws. You can’t take your eyes off her. That level of comfort is what we strive for.”

The next On Camera Workshop will take place on Saturday, Jan. 15, in Garrison.