Six months old.  Funny how similar the six-month-old Philipstown.info feels to a six-month-old baby: flushed with excitement about sitting up, balancing and staying upright— albeit with a few wobbles; grabbing at what’s just beyond reach and most of the time getting it; a torrent of sounds and grins. A nice age to be; a place on the planet newly but fully staked.

When I was shown the nascent website for the first time, a day or two before it was revealed to the public, my first reaction was immediate: finally, a reflection of the place I live in and the people who choose to make it home. People whose great-grandparents lived here too, and people whose moving vans just unloaded last week.

What constantly amazes me, but not really, is how such a small little 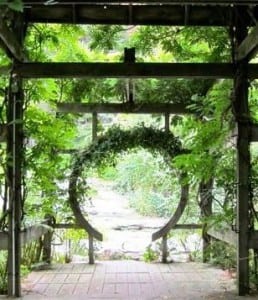 patch of geography can yield so many interesting things to cover.  Running out of ideas is emphatically not an occupational hazard as the Arts/Leisure/People editor.

What has been enjoyable to me, during the first six months, has been the mix of stories that I’ve pursued from my own experiences in over eleven years of living here, and those which arrived unexpectedly and have opened up corners and nooks of Philipstown life new to me. During my first month or two I tended towards covering things known to me; what has been most enjoyable in the months since has been the exposure to all of the alternate universes which comprise this little hamlet, village, town.

How lucky I’ve been, then, to be able to re-visit Stonecrop Gardens, and understand its mission and challenges through talking to its horticulturalist; to get a request for a calendar listing for Tai Chi classes and to ask of them instead if we could find out more about this discipline through a feature story; to be privileged to chat with 90-plus year-old WWII hero and lifelong Cold Spring resident Joe Etta at the Seniors’ Picnic, to name but a few of the wonderful experiences I’ve had covering stories over the past six months.

Etiquette for the Canine Set

The stories I’ve chosen to highlight more fully here all jumped out at me, for a variety of reasons.   The first one not only jumped, but panted and barked out at me right away: Etiquette for the Canine Set. I’ve chosen this one because I think it embodies a great many of the strengths of an online newspaper: the capacity to utilize wonderful video footage (courtesy of Drew Veltz), a whole bunch of photographs without the space limitations of the printed page, and a cross-section of the community brought together through their canine companions, reminding us that there are many things about life in Philipstown which trump all of the disagreements which are sometimes highlighted in local news stories.  It was fun to do, and, I hope, fun to read and view.

The second story also was easy to pick.  Right from the start I wanted to do a Behind the Counter series, spotlighting people in the community whom many residents interact with frequently and positively, but of whom they actually know little.  There have been three of these stories thus far (search for the others, Michelle at Yannitelli’s and David at Grand Cleaners with ‘Behind the Counter’), but the hardest man to pin down was the media-shy Harold Garrabrant, at Thrift King, in Nelsonville.  As an NYC transplant who learned how to drive only upon arriving in Cold Spring, and who was obviously a complete target for the unscrupulous, Harold has been one of my personal Philipstown saints through the years, and I was very eager to celebrate his honesty and great business practices, which are known to many.  It took weeks of nudging him for the interview, but I finally got my man!

Sold to the highest bidder

The last story I have chosen,

Artists on Location auction twice every year, but it was always one of those events I had somehow intended to go to but missed.  It was an obvious choice to cover, with its mix of local artists, landscape, community nonprofit and tradition.  The beauty of it, and the difficulty of it too, for this reporter, was that I was supposed to be just across the road from all the action, at another local nonprofit, the Depot Theatre, deep into a full-day rehearsal for Threepenny Opera, at the same time.

While the rehearsal was just getting started, in the early hours of what was a most spectacular day, weather-wise, I was able to grab a half hour, and head down to the water, taking pictures of those artists already at work along the shores of the Hudson, interviewing a few.  Then back into the dark interior of the theater for the next couple of hours, knowing, and worrying, that the “meat” of the story, the auction of these just-painted landscapes, would take place right as the director would likely be assembling the cast together for notes. 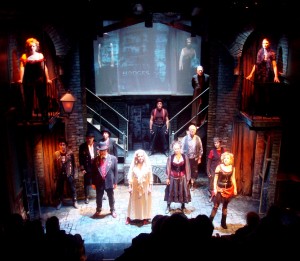 As luck would have it, the character I played in Threepenny opened up the show and then disappeared for most of the first act.  Heart-pounding, feeling like a hooky-playing kid, I snuck out after the first notes were given, sprinted across the way to the auction tent, pad and camera in hand, and got a nice chunk of story, aided by community members alerting me to the presence of the Garrison School art teacher, whose painting was being bid on.

Fear got the best of me, and I retreated back to the theater while the auction continued, feeling relieved to find that my absence had gone undetected.  The notes came to a conclusion, and I darted back, once again, to the auction tent, to find that former Gov. George Pataki was now in attendance.  Summoning up all of my local reporter nerve, I approached him for a quote and photo and he kindly obliged.  The proceedings came to a close, I went home, put all of these disjointed pieces together, and voilí¡, hopefully no one reading it could detect that I hadn’t been there all day!

A request to readers

If I could ask anything of our readers, it would be to be more interactive with the site.  I am approached frequently by readers, and know that many of you are regular followers of Philipstown.info, but few are commenting.  Whether it is dissent or a unique perspective, or a request for coverage of

another topic, please view the comments as a place for you to contribute your thoughts, and don’t hold back.

One other small request, if I may.  I’ve noticed that the stories we do about seniors are often the least-read, according to the “popularity” numbers.  The obvious answer is that many seniors are not Internet savvy, and are therefore not reading about themselves, but as they are so often relegated to an unseen role in communities, please take that moment to read about them.  Very few people clicked onto this important story, Help a Senior Get to the Doctor Through Friends in Service Driving (F.I.S.H.)  for example.  How about taking a few seconds to now, and calling F.I.S.H. if you are able to help?

One thought on “Alison Rooney”