Like the sign says, it’s once again time for the busy Philipstown Farm Market (a/k/a “Vera’s”) to hunker down for the winter, as they closed their doors for the season on Friday, Dec. 24.  If you’re thinking that all of the Giordano family jets off to the Caribbean for a few months, you would be wrong.  Although Vera does head to warmer climes (not the Caribbean) for January, other family members stay north.  Dominic spends quality family time with his four children, something he 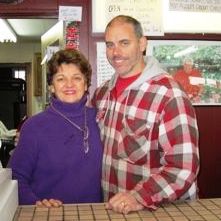 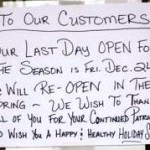 doesn’t get enough of during the long months he spends at the family business throughout most of the year, although he is quick to say, “I do more work in the two months off than the rest of the year.”

Although the Market doesn’t officially open up again until the beginning of April, the Giordanos only really take January off.  By February they are back on the premises, beginning the work on all of the plants and flowers which return again every spring, as if by magic, but really by Giordano.