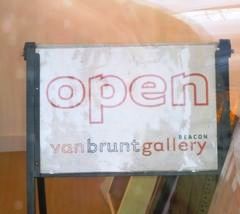 Not only is the New Year a theoretical time for pronouncements and vows to begin anew and put what’s bad behind, but, in the case of two businesses, a very real closing and opening of premises.

In Beacon, the Van Brunt Gallery wound up its long run as the lynchpin of the art gallery scene in that city.  Opened in 2002 by Philipstown’s Carl Van Brunt first in a large space on the East End of Beacon, the gallery was relocated to a smaller space in the West End about two years ago.  At the time of the initial opening, Van Brunt was quoted by Art Business News: “Our role is to promote the efforts of contemporary artists who are producing edgy, deeply felt and thought-provoking work. We plan to give collectors the opportunity to acquire new art of lasting value at reasonable prices.”  The gallery opened with “The inaugural Group Show,” showcasing 14 contemporary artists whose works ranged from abstract painting to video, photography and digital art. Throughout its eight years, the gallery continued to show the work of many of these artists, and always added new talent and emerging ideas and concepts to its roster.

Carl Van Brunt was very busy with closing up his physical location last week, and a longer interview with him will take place in the future, but he wanted to express that although the gallery itself will no longer be open, he will continue to be very much involved in the local art world.  He writes “I look forward to letting people know that I remain committed to art in our area in general and Beacon in particular. Van Brunt Gallery is becoming Van Brunt Projects. All that is really changing is that I won’t have a fixed location. The first project is happening in January at Hudson Beach Glass, 2nd floor gallery. I am putting together a show called “Route 28 or Thereabouts” which features seven artists from a bit north of here. The opening will be on Beacon’s Second Saturday, Jan. 8, with a reception from 6 to 9 p.m. I hope to do shows throughout the region. So basically I will be doing independent curating and private art dealing.

As for Beacon in general, the economy is tough, but I remain hopeful and enthusiastic. There are new places opening and tons of new artists have moved in. There is a youth movement happening, at least youth from my point of view at 64 years old. The energy is still good and there is such a wonderful concentration of engaging, thoughtful, socially and environmentally conscious people. Beacon is still a special place. As are Cold Spring and Garrison and many other places in the Hudson Valley.” 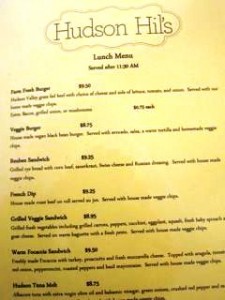 Back on Cold Spring’s Main Street, over the past few weeks people have been peering in the windows of what was formerly the Cold Spring Cafe, taking in the renovations going on and reading the sign announcing the new occupant “Hudson Hil’s Market and Cafe” and wondering what to expect. Last week, in a soft opening, the “coming soon” sign was changed to “open” and the first customers streamed in.  Philipstown.info stopped by last Friday, Dec. 31, in the middle of the afternoon, to find many tables filled and the excitement of a new establishment in the air.

Co-owner Hilary Hayes (yes, the place is named after her) took a few minutes out from the bustling activity to explain what she and her husband Bob have in mind.  Garrison residents since 2001, they have been developing and working on the concept for about a year now.  Set to become half restaurant and half market, the market portion will be open in a few weeks’ time.  The focus of both the restaurant and the market will be products sourced from the Hudson Valley.  Their menu highlights this, and their market will do the same.  Some of their suppliers include The Moveable Beast, from Ulster County (from which their burger hails); eggs from Feather Ridge Farms; meats from Quaker Creek; and baked goods from local baker Monika Strauss. 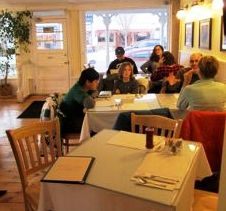 The market will “mimic what we’re doing on the menu,” says Hayes.  They’ll be selling meat by the pound, cheeses from the Hudson Valley, jams and honeys and baked goods.  They will also be selling prepared foods, doing take-out in the evenings, and also selling a range of sauces (red wine, mustard, for example) to go with the meat on sale.  “Should provide a nice meal with minimal work,” according to Hayes. Bob Hayes is a classically trained chef, originally from Colorado.  Hilary Hayes also has restaurant experience, and is returning to that “in a lifestyle change”- something close to home and new to me right now,”after years spent commuting to the city.

Cold Spring’s Diane and Curt Landtroop were just finishing up their meal when Philipstown.info was visiting, and pronounced it “delicious.”

Hudson Hil’s Cafe, at 129-131 Main Street, is now open daily except Tuesdays, with breakfast served all day, and lunch served from 11:30 a.m. until 4 p.m.  The market will have extended hours once it opens. Visit their Facebook page for more news on the market and for details on an evening tasting party which will take place later in the month.
Photos by Alison Rooney