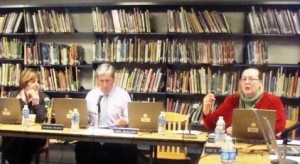 Board takes action that will lead to May 17 vote

At its Dec. 15 meeting, the Garrison School board approved the budget calendar for 2011/12. Establishing the calendar is perhaps the easiest portion of the budget process. Now that the winter holidays are over, the board needs to take actions that will lead up to the budget vote on May 17. The next step, a budget review, is on the agenda for the Jan. 19 regular meeting of the school board.

Last year, the GUFS board undertook a new process suggested by then Vice-President Eric Jacoby. “We would like to try something new,” he said at the time. Seeking to reflect a wider diversity of community opinion, the board disbanded the long-lived “budget committee” in favor of a series public workshops. Although there was much vocal opposition at last year’s workshops from former members of the budget committee, public and board opinion was generally favorable. The result of that process was passage of the 2009/10 budget by a fair margin on the first vote.

Following last year’s model, the workshops will each begin with an overview of budget issues and challenges facing the district by Superintendent Gloria Colucci. These are based upon an initial budget draft prepared by the superintendent, business administration, principal and facilities and transportation supervisor. Current downward economic trends, and cuts and reductions made in the 2009/10 budget may require many difficult decisions by the board this year. Among board concerns on the revenue side are the likelihood of continuing reductions in state aid, possible delays in payment of state aid and the end of federal stimulus monies. On the expense side are costs for state mandates, contract-mandated increases for teacher salaries, increased retirement system costs and sky-rocketing health care costs. Premiums only increased 3 percent last year, but last February Colucci said that retirement costs “will rise exponentially over the next few years.”

After the superintendent’s introduction, board-members and attendees divide into small groups to discuss aspects of the proposed draft budget. At the end of the discussion period, each group summarizes their discussions, which are recorded for distribution as minutes at the following workshop. This allows participants who do not attend all the workshops to be made aware of earlier discussions. The model also allows a continuity to be maintained throughout the process. At the same time, the board, informed by successive workshop outcomes, can prioritize budget items and reconcile revenues and expenditures. In an effort to encourage as much public participation as possible, workshops are scheduled over a two month period. Some are stand-alone and others occur during board meetings. A daytime meeting, in conjunction with the PTA is also scheduled. In early April, the board adopts a proposed budget.

GUFS has provided Philipstown.info with the 2011/12 school budget calendar, which may also be found on their website, www.gufs.org. Meetings generally begin at 7:30 p.m., but daytime meetings are also scheduled.