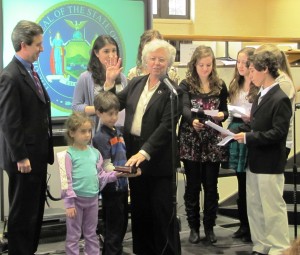 Assemblywoman Sandy Galef is sworn in for a new term representing the residents of the 90th Assembly District. She is joined by her family, including her grandchildren Dan and Sarah Galef holding the bible, along with the students of the Ossining Chapter of the Junior State of America who organized the event and administered the oath of office. Assemblywoman Galef was also joined by other Ossining High School students as well as local elected officials and members of the community.