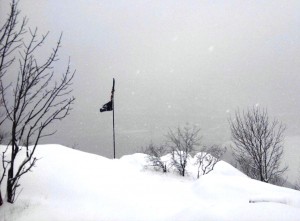 Flagpole where hiker was injured (Photo courtesy of CSFD)

At the height of last week’s snow storm the Cold Spring Fire Company (CSFC) and the Philipstown Volunteer Ambulance Corps (PVAC) rescued an injured hiker from high atop Breakneck Ridge. The CSFC received an emergency call at 2 p.m. Friday, Jan. 7.  CSFC President Mike Bowman told Philipstown.info that a 20-year-old male had hiked alone to the top of Breakneck Ridge. Nearing the flag pole, he seriously injured his knee.  The hiker called a friend who came to provide assistance and then called 911.

Bowman said that five CSFC personnel, aided by a PVAC medic, were dispatched. “Our guys (secured) the patient and began moving him down the trail,” Bowman said. “It took well over an hour and a half in a snow storm.” Assistant Fire Chief Matt Steltz was in charge of the operation and said that it took rescuers an hour to reach the victim. The descent took twice as long. The four Fire Company members who carried the victim out – Kevin and Chris Junjulas (father and son), Tommy Wills and Mark Ford -drew praise from Steltz. “Their commitment and dedication are unbelievable. The mountain itself is a treacherous rescue and conditions that day were horrendous. It was snowing hard. Visibility was poor. When they got down they were cold and wet.”  Steltz said that the rescuers were treated to lunch when they finally returned to the fire hall on Main Street . The name of the injured hiker has not been released.

One thought on “Update: Rescue on Breakneck Ridge”