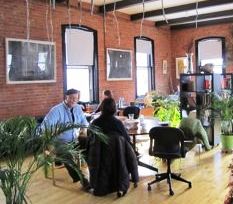 Eco-workspace is also a nucleus for assisting the region

Seeking companionship.  Single but not solitary male, creative, spends too many hours working.  Interested in building relationships, and community.

Ads on Match.com?  Nope, but could be slivers of the curricula vitae typical of members of BEAHIVE, “collaborative workspace” located in Beacon, utilized by a number of Philipstowners.

From the most obvious viewpoint, BEAHIVE is a physical space, occupying most of two floors in one of those architecturally-rich, restored Beacon buildings (it’s the 1907 Bell Telephone building.)  One large room, full of exposed brick and large windows, provides members, most of whom work from home, with a quiet place where there is nonetheless the (silent) companionship of others.  The rear of the room contains multiple workspaces, replete with Wi-Fi, A printer, fax, shelves of reference material available to all, and a minimum of distraction is the tone.  At the front are some couches for quiet conversation, and some communal tables for the once a week collegial lunches and the many other social events which take place at the space.

Founded in 2009, and already spawning an offshoot in Kingston, BEAHIVE is membership-based, self-described (on its website) as “a shared, creative work environment for freelancers, solopreneurs, micro-businesses, consultants and creative professionals to work in both focused silence and collaboration – to create ‘accelerated serendipity.'”  Founder Scott Tillitt, who moved to Beacon over 4 years ago from New York City, has more than just a “co-working” space in mind though, seeing BEAHIVE as a “means to greater goals – a larger community development vision.”  Tillitt, who works in communications and marketing in the public interest field, promoting nonprofits and social issues, hopes to use BEAHIVE as a cultivation source for galvanizing a collected group of socially-aware people, with varied skills 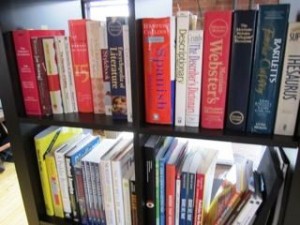 Some of the reference books available

and backgrounds to draw from, into working on concrete projects and programs to benefit Beacon and elsewhere in the Hudson Valley.  Calling most of his own work “a little abstract, without an immediate [community] benefit,” Tillitt says that, “With BEAHIVE I’m looking for a real change, tangible.  Maybe there will be a network of hives. We’ll see.”
|
Tillitt’s model is the Taproot Foundation, whose well-established template involves awarding service grants of expertise, rather than traditional monetary support, to strengthen communities. According to Tillitt, “Taproot will call on one their volunteer account directors to lead.  The account director pulls on the volunteer team for three to six months.  Solid processes are in place. Most volunteers are in full time, corporate, jobs, so blueprints are in place so that everything is facilitated well between the client and team. The ultimate goal is a ‘living economy.'”  Tillitt hopes to “leverage members to help realize the benefits of a living economy.”

Tillitt sees work “as a holistic thing. BEAHIVE uses social and cultural events to inspire and engage the members.” These events include not only the Thursday members’ lunches, but the “Solopreneur Sounding Board,” a once-a-month event where participants address the issues inherent in “going solo.”  Each person explains one issue he or she is grappling with, and everyone else in the group gives feedback.  BEAHIVE also serve as a host for other community groups, including the Contemporary Artists on Contemporary Art dialogue series, which takes place monthly through June: every first Thursday.

A recent Thursday lunchtime get together brought together many of these members, several of whom were Cold Spring residents.  Those in attendance represented a wide age-span and career paths.  Around the table, members and a few first-timers introduced themselves, and noted how long they had been involved with BEAHIVE:

Paul (another Paul)  – Academic, on sabbatical from the New School.  Needed a quiet place to work.

Chris  – Senior Interactive Developer for Media – a consultant who works for websites.  A member for almost a year.

Claire  – Working overseas [on a posting from France] for Hewlett-Packard; member since October.

Shelley  – Develops and improves methods of seismological research for a company based in Massachusetts which does a lot of contract work for the U.S. governments; joined a few months ago – has young children at home.

Stowe  – Social tools researcher, web-based; works with a lot of start-ups.  First time at BEAHIVE as just moved to Beacon a few weeks prior.  Moved from San Francisco to New York, as much of the technology industry shifts to New York City.

Venessa  – Just finished grad school in Media Studies from the New School.  Interested in the social impact of technology; just getting started with a technology career, writing about what’s new.

Gina – Been a Hive member for a year.  Used to work in marketing for financial services.  Now writing a series of travel guidebooks, as well as fiction.  Tries to come to BEAHIVE every day for two hours to write, undistracted.

Geoff  – First time visiting BEAHIVE.  Has over 40 years’ experience in nonprofit cultural management all over the U.S. Former Executive Director of Boscobel, now starting a nonprofit consultancy.  Read about BEAHIVE in Chronogram and felt the “idea of having a place where you get out of your house is appealing – also making connections, especially with people younger than yourself.” 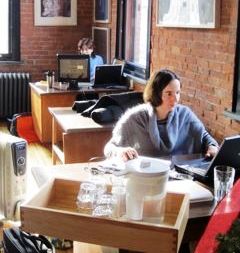 In response to a question posed by Philipstown.info of “what factor drew you most to BEAHIVE?” i.e. a shared workspace, or networking, etc., the answers were varied:

Kelly: “A mixture.  I wanted to support the community and I like meeting people, but I also need the structure of going and sitting at a desk.  In the beginning it was probably more ideals, but now it’s really people – and no cats sitting on my keyboard!”

Chris:  Getting out of the house.  Also, for me the aspect of being able to walk here from the train [from Poughkeepsie] and walk back, just getting that kind of exercise is a big piece of it.

Jeff: I’m intrigued by the whole idea here – a space dedicated to community, but also entrepreneurial.  The whole aspect of a place to come communicate and germinate ideas.

Gina: I thought I’d be distracted, but I haven’t been. However the social aspect is important too.

Scott: There are co-work places everywhere, but some are too social.  There’s a balance here.

In the year and nine months that BEAHIVE has been open, there has not been a lot of turnover, in terms of people leaving, and perhaps that is because membership is very flexible, with various levels offered, from just one day’s use a month (for $20 a month) to 24/7 ($180 a month), and in between.  Tillitt says that, all up, there have been about 30 members since the start-up.

For more information on all that’s available at BEAHIVE, visit their very comprehensive website, beahivebzzz.com, or call 845-318-3731.  BEAHIVE is located at 291 Main St. in Beacon.
Photos by Alison Rooney

3 thoughts on “Community Spirit of the BEAHIVE”