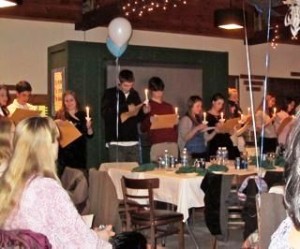 The induction of Haldane’s new members of the National Honor Society took place at the Taconic Outdoor Education Center on Jan. 13, 2011.  In a ceremony, which in itself honored the traditions of the organization, students were welcomed by Honor Society advisor Mr. Sassano, High School Principal Mr. Alm, and by the current president, vice-president, secretary and treasurer of the Honor Society, seniors Tess Dul, Kelly Semple, Victoria Serradas and Sara Rizzi, respectively.

The new inductees came to the podium, and chose one of the four pillars of the Honor Society: leadership, character, service or scholarship as “theirs” and provided a rationale for their choice.  Each then lit a candle and assembled on either side of the large audience of proud parents.

At the conclusion of the ceremony, Haldane Superintendent Dr. Villanti addressed the students, and added a “fifth pillar” to those already ascribed, “civility.”  Invoking the words spoken by President Obama at the memorial service just the night before, for those shot in Tucson, he urged the students to give the utmost respect for each other, despite the inevitability of differences of opinion inherent in any gathering of people.

The 36 new inductees are: