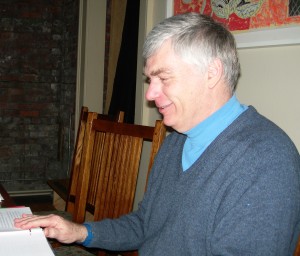 Mike Armstrong, chair of the Special Board for Comp Plan and LWRP

In December 2010, the Special Board responsible for drafting a new Comprehensive Plan and a Local Waterfront Revitalization Plan (LWRP) for Cold Spring submitted the former document to village board for its consideration. It is now working on drafting the latter. Residents can be forgiven if they are at times confused over the need for the two plans. Philipstown.info’s Michael Turton recently interviewed Special Board chair Mike Armstrong to talk about the difference between the two – and why an LWRP is necessary. Their conversation has been edited and condensed, but first some history and background.

Cold Spring last adopted a Comprehensive Plan in 1987. All land use regulations, including zoning, flow from the Comprehensive Plan which is a local, home-grown document. The problem with the 1987 plan is that it was never really implemented. The LWRP is a document that must meet New York State planning requirements for coastal communities. In Cold Spring’s case, the coastline is the Hudson River. A previous Cold Spring LWRP initiated in 1985 was rejected by New York State.

In 2006 discussions got underway to update the two documents and a survey of village residents was undertaken in 2007. That survey asked residents to comment on Cold Spring’s priorities. In essence it asked them to say what they want their community to be.Because there is considerable similarity between the two planning documents, the Special Board initially undertook to complete both at the same time.

Philipstown.info: What is the essential difference between the Comprehensive Plan and the LWRP?
Armstrong: The LWRP is based on coastal resources law. A Comp Plan doesn’t necessarily include a coastal area. An LWRP is a much more highly defined process with specific tasks to complete in reporting to the state. The LWRP must be approved by the state. The Comp Plan does not.

Philipstown.info: Once adopted the Comp Plan has the force of law. Will the LWRP have the force of law as well?
Armstrong: Yes. Future development must be consistent with the LWRP which must be approved by the state – once local laws and policies have been adopted.

Philipstown.info: Most things come down to money. Will the LWRP give Cold Spring access to grants that the Comp Plan won’t?
Armstrong: Probably yes. The second phase of the LWRP will include an intense search for grants. It will help us leverage those grants. The Comp Plan does too – but the LWRP does even more so.

Philipstown.info: But why not just have a Comp Plan and no LWRP?
Armstrong: The Comp Plan relies heavily on the making of laws after it is drafted – and that can take a long time. In the case of the LWRP the laws must be adopted before the state approves it. The LWRP has standing with both federal and state government. The Comp Plan doesn’t, but both have value.Ã‚

Philipstown.info: It seems that the LWRP is more detailed in nature. Can you give an example or two of that increased detail?
Armstrong: Shoreline erosion is an issue that LWRP policies must address in detail. The Comp Plan may deal generally with the rise in water levels but for the LWRP we will bring in experts to address the impact of rising water levels, have detailed mapping and laws. Dredging is hardly addressed in the Comp Plan but will have added detail in the LWRP.

Philipstown.info: Will the LWRP affect zoning?
Armstrong: Yes – but it’s one village and the two documents will have many similarities.

Philipstown.info: At last week’s meeting you asked Special Board members what aspects of the LWRP could be effectively depicted visually for the public. What were some of their ideas?
Armstrong: Some things can just be imagined more clearly using visuals – such as a park at the village garage site, or Dockside or the river walk trail. It’s hard to just read a written description. One picture is worth a thousand words.

Philipstown.info: How does the cost of the LWRP compare to the Comp Plan and where does the funding come from for both?
Armstrong: Since January 2009, $22,000 has been budgeted by the village for the Comp Plan and we expect to get about $12,000 of that back from the State through the LWRP process – because a lot of the work on the Comp Plan exactly matches what is needed for the LWRP. So the village will contribute approximately $10,00 to $15,000 to the Comp Plan depending on final legal costs. The LWRP is a $100,000 project with the state providing half the cost. The majority of the village’s share is in the form of volunteer time. We established a value for volunteer time and we have plenty of volunteer hours – more than other communities – at least 7,000 hours. Maybe as much as 10,000 hours.

Philipstown.info: The consulting firm Green Plan came on to assist at the end of the Comp Plan process. Will it play a more significant role in the LWRP?
Armstrong: Yes. Funding is greater and we expect them to be present at more meetings.  For the Comp Plan they edited what we wrote but for the LWRP they will do much more detailed reporting.

Philipstown.info: When do you hope to complete the LWRP?
Armstrong: The report for the first phase is due Oct. 31, 2011 and the contract with Green Plan ends in November. For the second phase – implementation – it’s anybody’s guess but I’d say another year to get that done.

Philipstown.info: How will Cold Spring’s LWRP differ from that of other communities such as Beacon or Poughkeepsie?
Armstrong: The entire village lies within the LWRP zone – making it a perfect fit with the Comp Plan. In  Beacon and Poughkeepsie only a portion would be part of the LWRP area – that’s pretty common.

Philipstown.info: Will Cold Spring’s standing committees be asked to comment on the LWRP as they were for the Comp Plan?
Armstrong: That goes to the final phase. We would welcome their input.

Philipstown.info: When will the public be asked for their comments and input?
Armstrong: Our meetings are all public. Saturday, May 14, 2011 looks pretty solid as the date for a (formal) public meeting, followed by another on Sept. 17, 2011 at which we’ll present the final report. We’ll actively solicit public comment but we won’t do another survey – the one we have is reasonably current. Village trustees will also have to accept and/or revise the LWRP. And it has to be approved by the state before being adopted.

Philipstown.info: How much information from the Comp Plan will actually be used in drafting the LWRP?
Armstrong: Quite a bit. We gathered a lot of information for the Comp Plan with an eye towards the LWRP. A lot of the research was done when the two plans were being worked on as one.

Philipstown.info: Metro-North is obviously a big factor in Cold Spring. Will they be asked for input on the LWRP?
Armstrong: Yes – as they were for the Comp Plan. They will be one of the organizations we’ll talk to. It’s interesting – some of the ideas Metro-North would be interested in – such as the river walk – were also in the 1987 Comp Plan which was not implemented.

Philipstown.info: With New York State in such financial turmoil is the funding for the LWRP etched in stone?
Armstrong: Well, never say never, but we’re reasonably assured that the funds have been appropriated. We won’t know about the second phase until the summer.  We’re pretty confident funding for this first phase has been approved.

Philipstown.info: You mentioned Metro-North. What other organizations will make detailed presentations to the Special Board?
Armstrong: They would include the Army Corps of Engineers for issues such as silting at the boat club; New York DEC regarding the rise in water levels and the federal EPA for issues such as the Marathon Battery property.

Philipstown.info: Changes to the Cold Spring dock have been discussed. Will the LWRP include detailed designs for such projects?
Armstrong: It may not include detailed engineering and design but it may indicate what desirable, funding sources is for engineering, funding application deadlines and the like.

Philipstown.info: How are you feeling at this stage of the process?
Armstrong: It’s coming together. You never know how things will go. There have been some differences of opinion – but that’s healthy. I think there is a sense of closure and that is good for the village. We don’t want to just jump ahead. We’re taking a conservative, deliberate approach to this process. I’m happy. The process failed before – the 1987 Comp Plan was not implemented and the LWRP was rejected. We’re moving forward.

Philipstown.info: There has at times been some pretty heated conflict on the Special Board. What’s been the biggest challenge in dealing with that – and the committee structure?
Armstrong: It’s been a little hard to know where the objections  from some committee members have come from. A lot of the objections have been very general – which have been hard to address. We had a process designed by (Special Board member) Marie Early, a retired IBM executive who has managed large projects. We had intense discussions and always agreement on specifics but sometimes not on principles – but that’s water under the bridge now. I value robust discussion. You have a better outcome. But at some point you have to decide and move on.

Philipstown.info: I think skeptics probably question the value of the whole process and say “So what?” What do you say to them?
Armstrong: The “so what” is that there will be a lot of positive changes. There already have been. Some new businesses would not be there without this process – such as the parking waiver which came about as a result. And the village is already saving about $16,000 in recycling. The skeptic will be wrong by the time he speaks. The process will help the village control costs, increase amenities for residents and help the local economy. The biggest thing is that this process will improve our ability to get things done. And we’ll have a much better ability to get funding.

Philipstown.info: Think you’d ever want to be a municipal planner?
Armstrong: No. Although my father was a civil engineer who helped with the building of Levittown on Long Island.

Philipstown.info: There’s some irony there.
Armstrong: Yes there is.