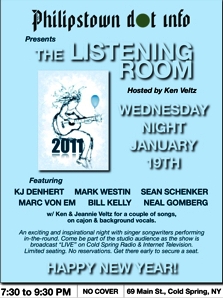 The Listening Room returns for its second appearance at 69 Main Street in Cold Spring – the home of Philipstown.info  – on Wednesday, Jan. 19 at 7:30 p.m. Ken Veltz, creator of The Listening Room, has put together another stellar lineup of singer-songwriters. This month’s performers include KJ Denhert, Mark Westin, Marc Von Em, Bill Kelly and Neil Gomberg. Also featured will be Sean Schenker, lead singer of The Trapps – fresh from an appearance at the venerable Joe’s Pub in New York City. Veltz and his wife Jeannie will also sing “a couple of songs” and provide background vocals.

This month’s “in the round” showcase of original music will include a  new twist after the main event. Immediately following The Listening Room’s last note an after party will be held at McGuire’s-on-Main and will include an additional set featuring  Mark Westin.

Wednesday’s concert will be broadcast live on Cold Spring Radio which is also located at 69 Main Street. It will also be broadcast live on Internet Television. Seating is limited and no reservations are accepted. After the highly successful December Listening Room, a large turnout is expected and organizers advise music lovers to arrive early. There is no cover charge. The Listening Room is sponsored by Philipstown.info.