The audience at the VFW Jan. 15

Confronting rumors about fire station closures and finding that local residents value their fire protection but worry about aging on the part of both firefighters and infrastructure, a 1960 Haldane High School graduate returned to Philipstown last week to study local emergency services. Ron Graner of RFG Fire Rescue Consulting, a veteran fire fighter, fire chief, and national expert on fire safety led forums for fire and emergency services personnel and the public and elected officials Thursday through Saturday, Jan. 13-15.  Now based in Georgia after serving as a firefighter in Rochester and fire chief in Stamford, Conn., and elsewhere, he began as a teen-age member of the now-defunct Nelsonville fire department. Philipstown hired him under a New York State Local Government Efficiency grant. The Town Board last summer launched an effort to study local emergency services, provided by four fire departments and two ambulance corps, to determine the possible benefits, or lack, of merging them into a single, town-wide district.  Graner’s review fits into the Town Board’s desires to get a clearer picture, but is separate from the efforts of a pilot panel of local emergency services members taking a preliminary look at consolidation or other alternatives.

“There’s a lot of rumors going around about what this study is all about, what I’m here to do,” Graner said Saturday as he began his presentation, assisted by his wife. “We’re here to evaluate present and future capabilities: What have you got today and what do you need tomorrow? What is in the public’s best interests? He announced that “I pick and choose” among assignments and said he always tells potential clients something upfront: “Don’t consider me to do a job if you want me to cut a fire department apart” or compromise firefighter safety.

In Philipstown, he said, his charge “is to help the town, help the villages, to look at their fire services with an objective view, an outside view” and to help them with strategic planning. Accordingly, he said, he will “examine fire and EMS here, examine their ability to provide adequate, quality emergency services to the town. What do these agencies need to serve their communities well? And what are the opportunities for shared services?” To answer such questions, he said, he also wants “to explore the fiscal capabilities and match those to the desires and demands of the town.”
“The challenge for emergency services is to critically look at themselves,” he added. 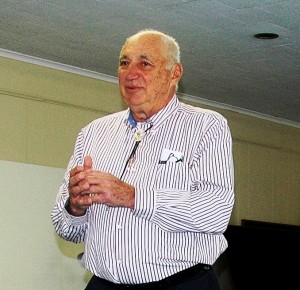 An audience member mentioned rumors that the Garrison fire department would be closed, forcing the hamlet to rely on fire service from Cold Spring and elsewhere. That prompted Graner to state what he called “Rule Number. 1: You can’t go into a neighborhood and close a fire house.” He cautioned that the corollary is that a town similarly cannot build a new fire house in a neighborhood because residents fear the disruption and noise. In regard to costs, he noted that “there are more taxing entities in the State of New York than in the other 50 states combined.” All over, though, he said, “elected officials today become the enemies of those who want to cut taxes for no reasons or legitimate reasons.”

Despite the acrimony that has sometimes surfaced at public forums on fire department issues, the audience of about 25 firefighters, residents, and elected officials demonstrated polite attentiveness during the meeting. Before it began, however, one attendee expressed his disgust that Town Board members would be present, only to add that it would be all right because “I’m packing,” an apparent reference to a concealed handgun, for which he said he has a permit.

“This community is blessed to have volunteers willing to put their lives at risk” for the good of others, Graner told the audience.  After explaining his mission, he asked the audience for input on the strengths, weaknesses, opportunities, and threats characterizing emergency services in Philipstown. He began by asking what things the public gets from the four fire departments, which, in addition to the Cold Spring and North Highlands fire companies include the Garrison Volunteer Fire Company and Continental Village Fire Department. Along with fire protection itself, the audience offered a long list of benefits, including mutual aid, assistance in storm emergencies, response to car or boating accidents, mountain rescues, fire prevention and education, use of firehouses for voting and public meetings, the creation of a sense of community through fire department activities, traffic control, and more.

Strengths of the fire departments included their internal camaraderie, reliability “there when you need them,” proximity to residents, commitment and “putting their lives on the line” to serve others, cooperation with each other and the public for the good of the community ability to save taxpayer money as volunteer forces, and quality training. Weaknesses included lack of volunteers; the fact many volunteer firefighters are aging; aging infrastructure, including water pipes and resultant complications for adequate flows for fighting fires in the villages; lack of a ladder truck and an updated fire house for Cold Spring; worries about coverage during daytime, communication among firefighters on the scene of a fire, and good relations with the wider community. Perceived threats and weaknesses often overlapped or dovetailed but also pointed toward strengths and opportunities. For example, the problem of recruiting volunteers, cited as a threat and weakness,  can be linked to the opportunity to enhance the economy through more local businesses, offsetting the need for potential volunteers to commute long miles to employment and remain absent from Philipstown most of the day. Likewise, some suggested, high internal morale in a fire department has a flip side in the potential for too much insularity and unfriendliness to outsiders.

Other threats included budget constraints, unfunded government mandates and state and federal requirements, climate change, dearth of sprinkler systems, and light-weight modern construction that can allow buildings to collapse or burn much more readily than those from earlier decades. Opportunities and goals also included cost control, consolidation of fire and emergency services, elimination of redundancy, better sharing of services, burying of power lines, and making newcomers feel more welcome in Philipstown and local fire companies. The last point “goes in a lot of different directions” that should include making women feel more comfortable in fire departments, Graner said. Women represent half the population, he reminded everyone. “It’s a pool and if you’re missing that pool you need to get into the water.”

He invited the audience and others to contact him as he continues his study. “If anybody has any comments or any things you didn’t want to say at a meeting, please e-mail them to me,” he urged. [[email protected]] As part of his work, he said he sent requests for information to the local departments in October, and awaits the results. Replying to an audience member who thought the departments seemed to lagging in supplying the material, Graner said, “I expect that I’m going to get it. I’ve seen nothing but dedication from the people that’ve come to the meetings.”

“I’m confident the departments will do the right thing,” Van Tassel said.