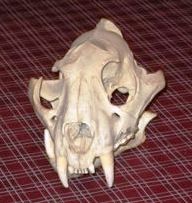 Look twice at the man behind you on line at the post office or the bank.  If that man is Garrison’s Scott Silver, it’s possible that he may have recently returned from documenting the jaguar population of Cockscomb Reserve, in Belize.  It’s never just another day at the office for Silver, who is the Facility Director/Animal Curator at the Queens Zoo, and who commutes even further on occasion, leading field studies researching the third largest species of cat in the world, and the largest in the Western hemisphere: the jaguar.

On Saturday, Jan. 8, Silver gave a talk on the methodologies used in studying jaguar populations in Central and South America  The presentation, hosted by the Putnam Highlands Audubon Society at the Taconic Outdoor Education Center attracted a roomful of wildlife aficionados, many of whom had stayed on after the Audubon Society’s bi-annual birdseed pick-up.

Silver’s interest in jaguars stems from the time he spent working with Howler monkeys, the subject of his doctorate. Spending his time in Mayan villages, he was introduced to the jaguar. Silver began his Power Point presentation by giving a broad overview of the jaguar’s geographic range, which extends from just across the southern Arizona border down to northern Argentina. (The most widespread cat is the Mountain Lion, found from southern Alaska to southern Argentina.)  Fossils found indicate that jaguars were once found as far east as Mississippi, and as far north as Kansas. The current range has shrunk about 70 percent from the historic range, although in two thirds of the current range there is healthy population with a strong chance of survival. The jaguars require a supply of large prey in order to survive.

Though jaguars vary in size, color, patterns, and characteristics, the multiple varieties are nonetheless considered a single species. The size of the males varies from approximately 350 pounds, common in those living in the Pantanal region of Brazil, to the smaller ones of the Mexican Yucatan peninsula, weighing approximately 150 pounds.  Jaguars, which fall under the genus panthera, are considered “big cats.” 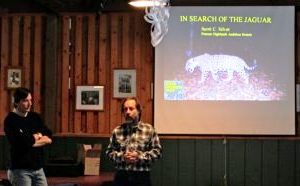 Silver discussed the recent history of jaguar research, calling the primary focus of it “serving the jaguar population.”  As recently as 1998 there was, according to Silver, “no unifying strategy for protecting jaguars, so the Wildlife Conservation Society (WCS) held a “jaguar workshop” which attracted a wide variety of people involved with jaguars in some way: from students to hunters to scientists, pooling everyone’s knowledge.  This was the birth of the jaguar conservation program.  The WCS has developed techniques for extracting information on jaguar populations and, by virtue of being a large and influential organization, has been able to teach teams of other researchers, in many countries, these same techniques so that a unified model of study is applied to all of the research. Currently, per Silver, there have been over 70 surveys completed in 50 sites in 11 countries in Central and South America.  Some of the surveys have been repeated for five years.

The main focus of Silver’s talk was the methodology employed in getting accurate counts of jaguar populations.  Before describing how this was done, he talked about why getting such a count was so difficult.  Jaguars:

And why is counting so important? Silver says that we “have to have knowledge of increases and decreases [in population]; we also need to figure out what a viable population is. Saving just a handful of jaguar is not enough, a genetic variability is required.” Counting tells us where efforts should be made to conserve and ” it helps to monitor and identify trends in jaguar populations.”

So how do you count animals you can’t see? Jaguars are notoriously people-shy -in all of his years of research, which included living in Belize for two years, Silver has seen only one live, in the wild, although he stated that,“I have almost seen them many times! They’ve got a conspiracy against me!”  The counting is done by a system called marking and re-capturing, originally designed for tracking small animals.  This system involves estimating the overall number of individuals in a sample area based upon the proportion of animals captured or photographed once to animals re-captured/re-photographed.  A multi-triggered camera track “marks” a beam much like a spotlight: if something warm-blooded walks by, it takes a picture.  Images are then examined through a system both complex (mathematical reasoning and formulas are employed) and straightforward (images are layered upon each other so that animal patterns can be discerned by seeing what does or doesn’t match up).

There are a host of parameters attached to this scientific model, including demographic closure, careful date and time monitoring, no  – gaps in the grid of camera placement and many other conditions. Although some of the marking and re-capturing description was fairly complex, by relating 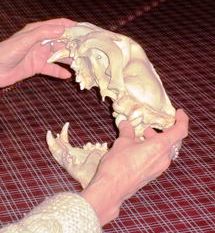 Skull of a jaguar

it to a specific research endeavor of his, Silver was able to explain it in layman’s terms so that audience (which included many birders, accustomed to keeping count) was able to follow and grasp the concept.

In the course of the presentation, Silver imparted general information about the jaguar.  For example, jaguars hunt by scent, not sight, with their mouth frequently open to guide them.  They generally don’t touch “kills” made by other animals.  They are solitary animals, and do not live in prides.  In some of the black jaguars (they are not found in Central America) the spots are visible through the black coat.  Jaguar density is highest in moist, tropical forest and lowest in grassland.

Silver ended his talk by speaking of the future. “There’s still a lot more to do.  We need to fill in gaps of knowledge.  Now we’re identifying individual areas, maintaining genetic connectivity.  This allows us to make suggestions about land use to allow jaguar populations to migrate between locations.”  Silver confirmed “man is the biggest threat to jaguar,” be it from hunting for medicinal uses or pelts, or conversion of habitats, or by hunting the prey that the jaguar eat.

Questions from the audience followed the talk.  Topics included a comparison between jaguar and leopards, the number in zoo populations, and new techniques for researching populations, including hair collection for DNA.

At the conclusion of the program, Rich Anderson of Putnam Highlands Audubon spoke of using some of the same tracking techniques in monitoring local wildlife populations, mentioning an increase in fishers, an animal he described as “showing up more and more here.” Anderson and Audubon’s Pete Salmansohn spoke about future Audubon programs, including another talk by Silver on thick-billed parrots (the Queens Zoo has the largest flock of these rare birds in the U.S.); the Backyard Bird Count; Frog Watch, which is a Citizen Science project which monitors frog populations for which local volunteers are needed; and Eaglefest, which takes place on Feb. 5 at locations along the Hudson, including at locally at Constitution Marsh.

Join The Current before Dec. 31 and all gifts will be matched! Become a member today to support our independent journalism.