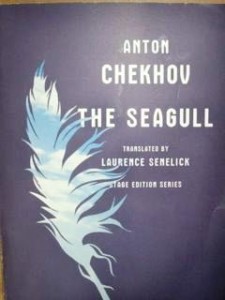 It is the intention of director John Plummer to take the fear out of the audition process and instead to inject some fun into the proceedings.  Auditions for the spring production of Anton Chekhov’s “brilliant human comedy” The Seagull, will take shape in an ensemble fashion, with further breaking down into smaller groups and pairs.  The auditions will be held on Friday, Jan. 28, from 7 — 10 p.m., and Sunday, Jan. 30, from 3 — 6 p.m. at the Depot Theatre, in Garrison.  Those auditioning should be prepared to stay for the entire three-hour block and should be familiar with all scenes/characters in their age range. Coming with questions is welcomed.
The Seagull (from a translation by Laurence Senelick), is the inaugural production of the newly-formed World’s End Theatre, whose founding members are Amy Dul, Maia Guest, Donald Kimmel, Jenn Lee, John Plummer, Gordon Stewart and Nancy Swann.  World’s End will produce in association with the Depot Theatre, with permission from Actors Equity (AEA), under the Special Appearance contract.  There will be a minimum of three AEA actors in the cast. Rehearsals begin April 26. The show opens on May 20 and runs 12 performances on weekends, closing on June 12.

Medvedenko – teens/20s, schoolteacher, opinionated but with a moderate opinion of self, in constant financial stress, doting. P 71-72; 137-139

Shamraev – 50s/60s, estate manager, delighted with life, loves his work, oblivious to his distance from his wife and daughter, is the master of his domain. P 123-124