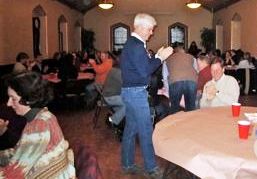 Humans have seven vertebrae in their necks; how many do giraffes have?  Heated debate followed at the roomful of tables that filled the Parish House at St. Mary’s last Friday night for the second annual Trivia Competition fundraiser held by the Haldane School Foundation (HSF).  Where else could you put that arcane or inane knowledge of, say, all of the ingredients mixed together to make the perfect Manhattan, or the State insect of New York, or who was the first quarterback to throw 5,000 passes?
This casual and convivial event, with its mix of beer, wine, (delicious) chili and some head-scratchers on a cold winter’s night sold out for the second year in a row, with friendly competition and puzzled looks making for an entertaining evening.  HSF President Dani Locastro pronounced it “a fabulous, energetic evening where the community got together and enjoyed themselves completely.”
Quizmaster John Essick was at the podium, asking the 13 teams a variety of questions, which ran the gamut from “what kind of fear is pagophobia?” to “whose dying words were ‘I should never have switched from scotch to 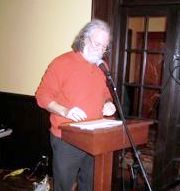 martinis’?”  Try answering those without the aid of Google!
The competition came to a rousing end with two teams tied, a sudden death round which resulted in another tie, and, finally, a tie-breaker which, fittingly, featured the question: “To the nearest ten thousandth, how much money did the HSF distribute in grants during the 2010 fall cycle?” We’ll share the answer to that one: $29,000, given toward many enhancements—from programs to resources—that, according to the HSF website, “augment the school’s regular curriculum through collaborations between Haldane and local cultural, historical, scientific, educational, environmental and philanthropic organizations and by creating partnerships between Haldane and other

schools to the curriculum of the elementary, middle and high school.”  The HSF awards grants twice a year, and the 2009/10 distributions came to approximately $55,000 in total.
The event was co-chaired by Justin Edelson and Terese Olsen, of the HSF, and was intentionally kept small and more affordable than many fundraisers.  The Foundation’s major fundraiser for the year, the Crystal Ball (formerly the Snow Ball), Funding the Future, takes place on March 19 at Dutchess Manor.  Visit http://www.haldaneschoolfoundation.org/ for more details. Photos by A. Rooney