Superintendent of Education Mark Villanti has been forecasting a financial “Perfect Storm” for months and at the Jan. 25 Haldane Board of Education Workshop his forecast became more detailed. It does not call for sunny skies. The bottom line: the school district’s revenues continue to fall while expenditures continue to rise. That leaves only two likely options – a tax increase or significant cuts in spending.  The major elements of the board’s 2011 budget dilemma are pretty straight forward. The solutions are not nearly as simple. New York State aid is expected to decrease by $250,000. Federal aid that totaled $330,000 over the past two years is about to disappear. At the same time, the costs of pensions and health care for teachers and support staff will increase. Fuel costs are also rising.

Two wild cards yet to be played

Newly elected Governor Andrew Cuomo has said that he will impose a cap on the tax levy that school districts use to generate funds – limiting any increase to either two percent or the Consumer price Index (CPI) – whichever is less. According to Villanti, the CPI has been at zero for the past two years but is currently just slightly below two percent. While he has not yet officially announced the cap, Cuomo is widely expected to make good on his promise. The other unknown is the new contract which the school board has just begun negotiating with the unions that represent its teachers and its support staff. 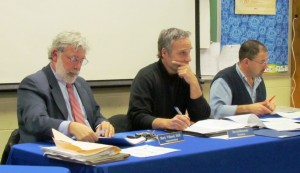 Villanti said that depending upon final figures for state aid, the district could be looking at cuts of approximately $177,000. “That’s significant in a small district” he said.  The district employs about 150 people and wages and benefits make up the largest single expense in its current $21,462, 350 budget. Referring to the possible cuts Villanti said, “If you think making decisions about snow days are difficult”¦” he said, his voice trailing off, “There is no doubt that with this year’s budget we won’t be able to fund everything we need. But I make this promise”¦we will talk about this openly. We’ve already had discussions with our two bargaining units. This is not a one-year issue. I anticipate a three-year issue.”

Scott Warren, a Cold Spring resident who has three children attending Haldane, asked if the board could impose a wage freeze on the district’s employees. Villanti said that the board cannot make such a move because it is legally obligated to honor the contracts it has with its unions. Trustee Michael Junjulas agreed and said, “They would have to come to us” with an offer to hold the line on wage increases.
When Cold Spring resident Peter Henderson asked when contract negotiations would be settled, Junjulas responded that he hoped it would be “by the end of the year.” Henderson replied, “It sounds like you have to craft a budget based on a huge unknown.” The proposed budget goes to voters in May. Warren said that his own wages had been frozen for the past three years, “And I still have to pay more in taxes.” He said that he hoped Haldane employees would “share my pain.” 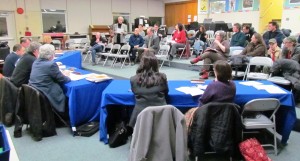 Audience posing questions to board

Villanti did have some relatively good news. He said that the board was not surprised by the budget challenges it now faces and that its conservative financial planning in recent years is a plus. The board has set aside reserves which total $800,000. In addition, $108,290 from a Federal Jobs Bill remains unspent. He also pointed out that Haldane depends less on state funding than other areas. That aid represents only about 14 percent of the district’s revenue. Villanti also said that the relatively strong local economy compared with other parts of New York State is a positive factor.

But despite any such good news, the cost of health care remains a major issue and not just for Haldane. Villanti said that state wide, the cost of health care has risen 10 percent per year over the past ten years. “That is dangerous because we pay for health care for retired teachers as well. Health care is about 10 percent of our budget. And that figure could increase to 30 percent.” Part of the board’s preliminary strategy will likely be to freeze all salaries and stipends not subject to collective bargaining – including Villanti’s wages. Trustees will also be lobbying state legislators to provide relief from unfunded mandates. Vice president Joe Curto said that, “Not all mandates are lousy, but some are absolutely ridiculous.” He urged residents to submit comments opposing unfunded mandates to the Governor’s website. http://governor.ny.gov

In other business, at the outset of the meeting, President Dave Merandy strongly supported Villanti’s handling of snow days and two-hour delays in recent weeks.  “People think it’s easy but Mark gets flack either way. We have a lot of gravel roads and safety is our utmost concern. I know it’s inconvenient but Mark has made the right call every time.”
Merandy also addressed ongoing discussions – and rumors – about improvements to Haldane’s playing fields. “I need to clear up one thing” he said, asserting that there is no plan or funding in place to add lights and artificial turf to the football field. “We’re not in an economy to do that. But we are going to see this [discussion] through.” Vice president Joe Curto added that, “The intent is to find a community-wide solution. We’re going to do this slowly and methodically. Nothing has been decided yet. And this is about a lot more than just football. It involves lacrosse, baseball, soccer”¦”
Safety at Haldane’s games involving contact sports was also discussed. A letter submitted by the Haldane Lacrosse Association urged that an assistant coach be appointed.  “”¦it makes sense to further enhance the safety of players by having an assistant coach, especially regarding the liability risk to the school if a player is injured” the letter states. Merandy said that the matter will be discussed at a meeting on Feb. 15.
Spring must at least now be on the distant horizon. John Koval had baseball on his mind. Koval urged trustees to consider establishing both a Junior Varsity and a modified baseball team at Haldane. While he was sympathetic to the idea, Villanti said, “The numbers [of players] are there but in this budget year”¦the timing is tough” adding that the minimum cost would be $6,000. Dave Merandy reacted even more strongly. “We’re a small district. We have no fields. How responsible is it to add another team? We don’t have assistant coaches. I’m not going to win any fans on this, but how can we start a new program now?” Some residents in attendance suggested that Haldane consider using a “pay to play” system in which parents could pay the cost of additional teams such as baseball.  Joe Curto said that such a system would raise questions of equity – with fees being charged for some sports but not others.
Trustees supported a request from BOCES to approve a capital project for improving its facilities – much in the manner that Haldane is. In order for the BOCES project to go ahead all 18 member districts must support it.