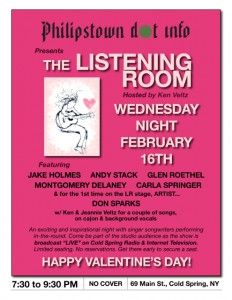 With more than two years worth of shows and more than 200 singer-songwriters under its belt, The Listening Room has reached out to a lot people with its original music, intimate settings and appreciative audiences. That reach took a giant leap forward at the January concert when it was broadcast live on Cold Spring Radio and on Internet television. Organizers feel that the Wednesday Feb. 16 Listening Room at 69 Main Street in Cold Spring may stretch that reach even further.
Ken Veltz, creator of The Listening Room, thinks that the “remote” audience will really take off. Last month’s concert-in-the-round, the first to be broadcast on internet television, attracted viewers from such far-flung places as Los Angeles, San Diego, Buffalo, Nashville and Austin, Texas.  Cold Spring Radio also aired the concert live and enjoyed its largest audience to date. It’s putting it mildly to say that Veltz is enthused about The Listening Room’s internet future. “We are in an electronic word-of-mouth age. I think 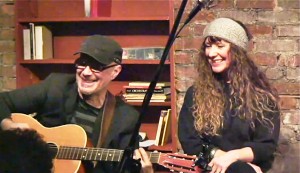 it (internet TV) is going to cause it to explode. It’s just a matter of priming the ‘viral pump’ by getting the word out to the combined fan base of the artists. I’m sure we will develop an international audience. As the television

screen and the computer screen merge to become one screen it’s going to be crazy easy for viewers to make entertainment choices with a simple click of the mouse” he said.
In addition to a life as a professional musician, Veltz also has considerable background in marketing, having handled the promotional end of a family-owned chain of restaurants across the US. He is structuring this series of Listening Room concerts to tie in with local businesses located “right across the street” from the concert venue. That fits well with his vision of Cold Spring which includes music as an economic catalyst for Main Street. On Feb 16 Veltz hopes to offer a Listening Room preview show at Go Go Pops from 6:30 to 7:15. An after-party will be held at McGuire’s-on-Main right after the concert and will include an extra music set. 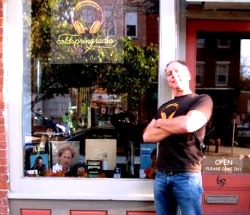 Sam Tallerico operates Cold Spring Radio and sees a growing connection between The Listening Room and his internet musical offerings. “Thanks to the first two Listening Rooms I was able to hear and be wowed by performers like Open Book, Neal Gomberg, Sean Schenker and KJ Denhert – none of whom I’d seen live before. They’re now all receiving air play on Cold Spring Radio” he said.
Philipstown.info, sponsor of The Listening Room, is also located at 69 Main Street – as is Cold Spring Radio. “I think it’s a perfect fit. All three entities are interested in serving a bigger picture – and are excited about bringing attention to the wonders of this Philipstown area”¦” Veltz said. The Feb. 16 show begins at 7:30 and will feature a number of fan favorites as well as some new blood. Performers will include Andy Stack, Montgomery Delaney, Jake Holmes, Glen Roethel and Carla Springer. Don Sparks will make his first Listening Room appearance. No reservations are accepted and seating is limited. Early arrival ensures a good seat.