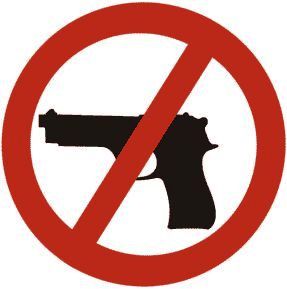 Philipstown’s supervisor, Cold Spring’s mayor, and the owners of Philipstown.info and The Putnam County News & Recorder are backing “zero-tolerance” for guns at public meetings and threatening comments in the public arena, whether in meeting halls or on the pages of newspapers and websites. Supervisor Richard Shea has launched an effort to draft a new law, to be discussed this week, spelling out the zero-tolerance-of-guns policy. The Town Board plans to meet Thursday, Feb. 3.
The government-media view about guns and vitriol took shape last week in conversations among Roger Ailes, owner of the PCNR, Philipstown.info publisher Gordon Stewart, and Shea. Mayor Seth Gallagher of Cold Spring joined them on Monday (Jan. 31). Concern was prompted by an incident at a Jan. 15 town-sponsored forum on fire protection services at which a man disparaged the Town Board, adding that  he was “packing,” an apparent  reference to a concealed handgun. The comment came before the meeting began, was overheard by some attendees, and sparked a controversy that spread to the pages of Philipstown.info, which removed both a comment from a reader concerned about the incident and a vehement personal remark reacting to the reader’s comment.
Summarizing their views as they emerged during an earlier substantive conversation with Ailes, Stewart said that all four agree about zero tolerance “when it comes to topics like guns, firearms, weapons, threats in public forums, public meetings, public discussions [and] for that matter, vocabulary, tone, characterizations that could be construed as either in themselves threatening or encouraging others to be threatening.” Stewart further commented that “as a dedicated citizen of Philipstown and the owner of our 145- year-old newspaper, Roger Ailes is a strong community leader in urging that whatever differences there may be among us on some issues, the legitimate uses of firearms do not include public meetings and personal threats.” Stewart also commented that “Simply stated, we believe that Philipstowners don’t want guns and vitriol in our public forums.”

Concurring, Shea said that “the Town of Philipstown has zero tolerance for firearms in public spaces. We did have an incident recently at a meeting where an individual claimed to be `packing,’ which I would construe as carrying a firearm. People were upset by it — rightfully so, in light of the occurrence in Arizona.” A week before the fire-services forum, a gunman killed a Congressional aide, a federal judge, and four members of the public at a “town-hall”-style meeting held by Rep. Gabrielle Giffords, D-Ariz., who was severely wounded. Shea did not attend the fire-services forum here, but Town Board Councilors Betty Budney, Nancy Montgomery, Barbara Scuccimarra, and John Van Tassel were present.

Upon learning what had happened at the meeting, Shea called the town attorney to get legislation underway. Now, he said, the town government “is crafting a local law that bars people from carrying firearms in our public buildings, on town properties, anywhere that the town owns property, because when we have a meeting we not only conduct the meeting, we guarantee the safety of people at the meeting.” Furthermore, he announced, “We’re going to have signs printed up, put on every town property, every town building, that say `no firearms allowed,’ absolutely.” Gallagher observed that the village prevents weapons from entering the Justice Court and said he was checking into the possibility of additional measures. “I’d like to take a look and see what they come up with” at the town level, he said
Feb. 1.
Stewart welcomed the government initiative and said that “Mr. Ailes reiterated that he is a resolute supporter of citizens’ right to bear and use appropriate arms for appropriate purposes “¦ and that even though we may not always agree on what those may be generally, we have no differences on threats of violence at our local public meetings or in our local media.” Stewart said he, Mr. Ailes and the government leaders all feel “that we love this place, we want everybody alive and prospering and well. And none of us wants to encourage, in any way, anyone to do anything related to firearms and mention them or make threats in public places. And while we’re at it, [let’s] try to have discourse be decent and civil.”
With several hot issues generating intense interest in Philipstown in recent months, Shea said, “sometimes the level of discourse has exceeded what I would say is civil and also gotten to the point of threatening, at times. I don’t think it serves any function. So we do need to remain civil when we’re having these debates.” The supervisor emphasized that the zero-tolerance policy differs from opposition to guns. “There’s a big difference between the right to own a firearm and carrying a firearm for a threatening purpose,” he said. “I’m a hunter. I have a great respect for firearms. I own guns [although] I don’t own handguns. There’s a great tradition of hunting here.”

Philipstown.info policies on letters and comments

Stewart expanded on the zero-tolerance policy for abusive or threatening language in public forums by clarifying Philipstown.info‘s policies regarding letters and comments posted in response to stories, and explained that was why two comments were removed. “Philipstown.info’s policy in regard to letters from Philipstown citizens is clear, open, and complete,” he said. “We encourage and embrace the expression of all views, including those critical of us. The only reasons we review submissions rather than run them automatically are to:

“However,” Stewart told readers, “letters which seem to violate Philipstown.info’s policy will not be rejected summarily or secretly. They will be returned to their authors, along with the concerns they raised and an invitation to submit revised versions. Philipstown.info will not refuse to print a letter from a citizen of Philipstown because it might be critical of us or might be embarrassing to us.”