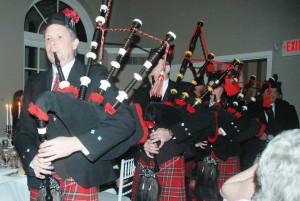 About 100 area residents joined the Cold Spring Fire Company Pipe Band Saturday to enjoy Scottish fare, raise toasts, warm by the fire, and down whisky, wine and stout at a Traditional Burns Night Supper. The annual event, which raises money for the pipe band, took place Jan. 29 at the Highlands County Club in Garrison. Born on Jan. 25, 1759, the honoree-in-spirit, Poet and farmer Robert “Robbie” Burns, won fame though not fortune before dying on July 21, 1796. A romantic rogue known for his lilting love poems and fathering a brood of children by different women, he also raised contemporary political eyebrows for admiring George Washington (a rebellious traitor to Britons of his age); scorned pompous, self-serving politicians; and used his verse to express appreciation for the countryside and its wildlife, including a wee mouse.
A Burns supper inevitably includes elements rarely seen at other dinner parties, with a bagpipe parade to usher the haggis into the room, nearly as many men as women in skirts (in the masculine case, kilts), virtuoso if skull-numbingly loud bagpipe renditions, and an instrumental ensemble decorously tucked into a corner like a chamber-music group but playing not Bach but ballads.
Then there are the speeches, including Burns’ own ode to the haggis — a sort of sausage made of entrails or meat, oatmeal, seasoning, and other ingredients, tucked into a sheep stomach for cooking and sometimes doused liberally with Scotch being consumed. Disdaining such supposed haut cuisine as a French ragout or fricassee, Burns saluted the haggis as a proud product of Scotland: 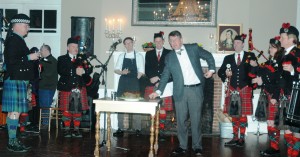 Delivering the Tribute to Robert Burns, writer Max Watman said that when asked by the pipe band to help out, “I thought I must have really arrived. I was honored. Of course, you know they run the town,” he added, a jest for Pipe Major Seth Gallagher, who also serves as mayor of Cold Spring. “That also explains why I said `yes’!” Watman said he prepared for his remarks by standing in his backyard, whisky (or whiskey) glass in hand, contemplating the Hudson’s own Highlands (which, despite the name, closely resemble the  rolling mountainous Lowlands of Burns’ homeland). A Cold Spring resident who authored a book on moonshine, a form of American whiskey (which adds an “e” to its spelling), Watman praised Burns’ energy and charismatic personal power. But he also noted Burn’s dichotomous nature as a famed poet and notorious philanderer, toast of Scots’ society and farmer well accustomed to ploughing and all the chores of an agricultural existence.
Pipe Band member Mark Civita and his wife, Pamela Wheeler-Civita, proved their literary prowess as well in the toasts to the lassies and lads. A sample from Mark’s: 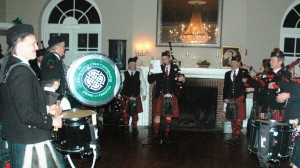 If there’s one to be found,

Is to remember your beginning,

Let them know that you get it,
You’d throw all the same passes,
That some things are just worth it,
“Now, here’s to the lasses.”
* *
Photos by L.S. Armstrong