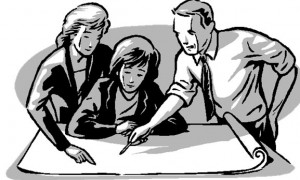 On a night when most public activities were postponed due to the weather, the Cold Spring Village Planning Board gamely went ahead with its regular monthly meeting Tuesday, Feb., but did not take any significant actions. With only three of the five members having braved the ice and cold and no recording secretary present, Chairman Joseph Barbaro handled the double duty of conducting the brief meeting and taking the minutes.
Barbaro disappointed Scenic Hudson’s hopes of having the board declare itself the “lead agency” for approving the group’s development plans for the West Point Foundry Preserve. The chairman said he was deferring the matter because he wanted all five members present for the decision.  Barbaro suggested the board could next address the issue at a scheduled workshop with the group on Feb. 22, although he said he would look into the possibility of doing it sooner.  An affirmative decision would push the four-year planning effort into its final phase by starting an approval clock for all other relevant agencies. Scenic Hudson is anxious to begin construction in 2011. At the request of Arne Saari, a board member, Barbaro agreed to ask James Cameron, the board’s consulting engineer, for an opinion on the road standards Scenic Hudson proposes for the site.
The board conducted a brief discussion on a request by the Village Board of Trustees for the Planning Board’s opinion on a proposed new law allowing river vessels, including a previously reported proposed tourist boat, to anchor off Waterfront Park, at the foot of Main Street. Arne Saari expressed concern over including canoes and kayaks in the definition of vessels. “It’s ridiculous to expect someone in a kayak to apply for a permit.  It would be better if they were just banned” he said, “especially if larger tourist vessels are anticipated” However, Karen Doyle, another board member, suggested their inclusion in the law was intended to give the village jurisdiction and therefore have the very effect Saari intended. From the audience, Architect James Hartford remarked that he was working on design plans for a floating dock for tourist boats and he understood the intent of the law was as Doyle suggested.  After some back and forth, Barbaro suggested they confirm the trustees’ intention.
Although the proposed law only addresses vessels in the river, Saari raised parking for cars as an unaddressed side-effect of introduction of tourist boats at the site. “Maybe the intent of having permits is to have people be told to park in the Metro-North lot which is free on the weekends,” he said. “I hope that’s the case.”  Hartford said he understood that the likely owners of a tourist boat operation would seek to have joint Metro-North train and boat tickets, therefore encouraging arrival by train.
Chairman Barbaro informed Hartford that the board was not yet ready to take up the application for a street-side sign advertising the businesses located in the carriage house building at 8 Marion Ave., Hartford’s reason for attending the meeting.  Barbaro said the village attorney had not yet responded to the “six questions” the board had asked him.  “When we receive his response we can schedule a workshop and reconvene the planning process,” he said. The matter of the sign approval, for a property owned by Cold Spring Mayor Seth Gallagher, has been pending since the fall. At the conclusion of the meeting, Hartford said the Historic District Review Board had given its approval of the sign in November.