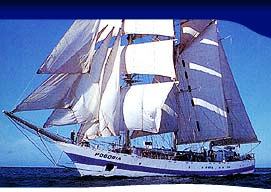 Local business partners Scott Stroppel and Jamie Copeland just completed their second week of training aboard the Polish Sail Training ship, Pogoria, off the west coast of Italy. The two are in training to become deck officers in the hopes of running similar trips of their own in the future. The 150 foot, 300 ton, three-masted barkentine accommodates for 49, including officers and crew. She was built in Poland’s famous Gdansk shipyards where, in the 1980’s, the Solidarity Movement was born (which eventually forced the communist regime to negotiate with workers for better conditions.)

The Mediterranean journey had a very coincidental genesis. While completing a construction project at the US Military Academy at West Point, Copeland and Stroppel had a conversation with a masonry contractor they were working with and happened to mention their interest in teaching American teenagers the joy of sailing. As fate would have it, the contractor serves as captain aboard the Pogoria during the winter. His January voyage was short two deck officers and he offered them the positions. It didn’t take them long to say ‘yes.’

The training voyage began in Imperia, located on the far northwest coast of Italy, just east of Monaco. Ports of call included the islands of Sardinia and Corsica, as well as Elba, famous as the location of Napoleon’s exile. “We learned navigation, large vessel seamanship and heavy weather tactics while enjoying hearty Polish meals and the rich kinship of spirit that exists between our two countries” Copeland said. 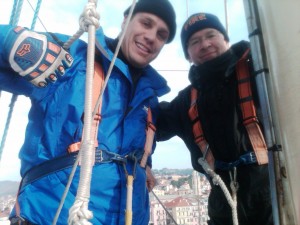 There are more than 500 Sail Training ships world wide.  Copeland said that one such program at West Island College of ontreal offers a sailing program that provides high school credit to students while living aboard a sailing ship. Students may sail for one or two semesters during which time they learn seamanship and work as crew members while taking high school classes with teachers on board.

Port programs in the cities visited provide the students with an opportunity to meet and interact with other cultures, giving them an international perspective on their education. Copeland would like to establish a similar program in the U.S. and says their mission is to teach the adventure of learning as a way of life.  “We want to move youth away from trivial dialogue and passive amusements into the realm of applied knowledge and active participation.  What better realm than the open ocean, a sailing ship and a destination?” he asked.

Copeland and Stroppel are partners in Hudson Structures, a Garrison-based construction company associated with Hudson Design.

One thought on “Garrison Businessmen Train as Deck Officers”