This week’s drive is dependent on community volunteers

Has this winter’s weather inconvenienced you?  Most likely. Has this winter’s weather been life-threatening to you?  Probably not, but it has wreaked havoc on blood supplies in this region, causing precipitous drops which could indeed be construed as life-threatening.  During the end of January, beginning of February snow- and ice-a-thon, blood supplies were down an estimated 8,000 pints.  With the treacherous roads contributing to higher accident levels, the combination is not a good one.  When schools close down for weather-related reasons, blood supplies take a hit, as most blood drives (though not Philipstown’s) take place at schools. Luckily, a two-day blood drive event is on the immediate horizon—Thursday and Friday Feb. 10 and 11—and it is the hope of Philipstown Blood Drive Chair Del Fidanque that people consider the importance of the donation of blood and turn out as never before to aid their community.  As Fidanque reminds us all, “If a trauma patient loses a lot of blood, there is no artificial substitute.”
There are four large blood drives annually in Philipstown, in February, May, August and November, each held on the first Friday of the month.  The February and May drives take place at the Garrison Fire House, while the August and November events take place at the North Highlands Fire House.  Organizing these events is a major undertaking, which falls to a team of dedicated volunteers, most of whom have been involved for many years.  For 25 years Hans Moeller spearheaded the drives.  When he needed to turn over the reins, he turned to the other volunteers and asked “who’s going to step up?”  The then-new recruit Fidanque figured it would be one of the old hands, thinking “I never thought I would be the one. But it comes down to do you want to see these things continue, or will you let it fade away? It’s no different than the Friends of the Desmond-Fish Library, or the Philipstown Garden Club flower show.  One year that didn’t happen; these events don’t run themselves.”  Fidanque’s involvement as a volunteer began because “my wife was a donor and I began to get a sense of how important it was.  Even if she was tired, she went.  I thought that at least I could recruit people.  And here I am.  At some point someone else will take it over, but I’ll do it for as long as I am able.”
A number of large organizations, such as the Red Cross, are expert in hosting blood drives, and they all rely on the support and expertise of the local community in running the drives.  The Philipstown Blood Drives have long been run in conjunction with the New York Blood Center.  Fidanque calls them “great, in terms of support.”  Though the drives occur only four times a year, the planning and initiatives involved are “always in the back of one’s mind,” says Fidanque.  Attracting donors is key, and new ideas are tried out constantly, from barbeques to face-painting and babysitting to encourage parents of the young to turn up and donate.  In recent months, with the support of Jaymark jewelers and the New York Blood Center, large and improved signage has been constructed and erected along major thoroughfares, in hopes of catching the eye of drivers. Unfortunately, this winter’s snow and ice has covered up one of the expensive signs, obscuring it until the warmer weather. 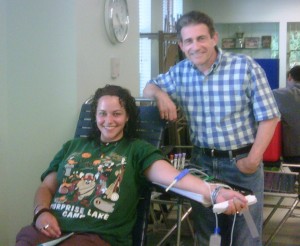 Despite all of this brainstorming, Fidanque says that it is more or less the same group of people who turn out consistently to give blood.  Nothing seems to make a huge difference, and he wishes this wasn’t the case, stressing how critical this need is. “The new signs say ‘saving lives’ and it’s true. For some reason, New York State has a lower participation rate (2 percent) than most other states. I’m not sure why.  One reason is that it is not pleasant [to donate].  But it’s a matter of degrees.  Which is more important?  Many people don’t realize that this is the only thing that will make a difference, whether it’s for trauma patients, transfusions, at-risk infants or cancer patients.”  The volunteers persist, as “it’s like any endeavor; there are no magic answers. You work as hard as you can at the mundane things, but that’s what it takes: the detail work.”
Despite this, Philipstown itself has a higher than usual amount of pints collected per drive, averaging 100 per drive as compared to the standard figure of 30 to 40.  Fidanque thinks this is due to the “great job done by our volunteers.”  He cites a few key people: “Candy Zgolinski, the Haldane school nurse does a huge job recruiting teachers and students at the school; Dan Dillon puts up a lot of the flyers and recruits as well; Camilla von Bergen recruits volunteers from St. Phillips Church; Sylvia Duffy and Pat Sexton have a long list of people; Allison Jacoby has helped so much with parents; our newest volunteer is Andy Chmar, of the Hudson Highlands Land Trust; and of course there is still Hans Moeller, our most dedicated volunteer. In addition, there is Celia Baczkowski, Director of Development and Alumni Relations at Surprise Lake Camp. Celia has been a loyal donor for many years and each summer she is the primary person responsible for bringing over 30 staff members from the Camp to donate for our August drive. All of these people are making calls and setting up appointments.  So many people are difficult to reach, but at least messages are left and it helps because it is important to get people to focus on the day.  We usually start the calls about 10 days before the drive.”
The recruitment actually begins with a letter, mailed six weeks or so before the drive to 500 or so donors, most of whom have participated for years. Flyers go up about a month in advance.  Volunteers are very much needed.  Recruitment is the key role.  As Fidanque puts it, “Just one or two new donors can make a difference.  If that person comes back, that’s four pints of blood that wouldn’t be there.” On the day of the drive, with the great assistance of the fire houses, who make their facilities accessible from noon until 10 p.m., the New York Blood Center virtually takes over, setting up the facility, running the drive, and breaking everything down at the end.  Volunteers assist at the drive itself, helping to keep things running smoothly, in particular acting as “chaperones,” guiding those who have just donated to the canteen to fill up on fluids and refreshments.  Fidanque says that his job on the day is to “make it as easy as possible for the donors.” The average duration of time involved in making a donation is 35 to 50 minutes, with a good portion of that taken up with the paperwork required each time. Fidanque encourages donors to “bring a book, socialize, see your neighbors, meet people that you know—it’s a friendly group.  Everyone understands how important it is.”  The percentage of returnee donors is high—Fidanque estimates it at 85 to 90 percent. He says “once you’ve had a loved one need blood, or you witness a transfusion, you don’t have to be sold on how important this is.  People who are committed know that it can be uncomfortable, but they come back.”
In general the recruitment has led to 100 to 120 people who show up regularly.  This in turn yields about 80 to 100 donors because there are always deferrals due to health issues or geographic requirements.  Donors may be between 16 and 75 years of age.  Sixteen-year-olds require parental permission, either in person on the day or through a downloadable form available on the New York Blood Center website.  Those over 75 may donate with a note from their physician.  All donors must be over 110 pounds. Donors do not have to live in Philipstown, and there are usually some walk-ins on the day.
All of the blood collected is used regionally. It was the New York Blood Center which requested the two-day drives which take place twice a year.  According to Fidanque, “they called and asked if we’d be willing.  Why not?”  Up until now, though, the two-day drives have not generated an increased collection of pints.  Fidanque hopes this will change, perhaps at this week’s drive.
For more information, and to ask any questions, call 800-688-0900 or visit www.nybloodcenter.org.  To set up an appointment time to donate, call the New York Blood Center at 800-933-2366.  To find out more about volunteering with the Philipstown Blood Drive group, contact Candy Zgolinski at Haldane, 845-265-9254, extension 125.
Once again, this week’s drive takes place at the Garrison Fire House on Route 9, on Thursday, Feb. 10 and Friday, Feb. 11 from 2 p.m. until 8 p.m. Anyone donating should bring identification with photo or signature. Click here for a flyer with details.