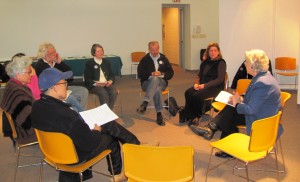 Only a half dozen people attended State Assemblywoman Sandy Galef’s town hall meeting at the Desmond Fish Library on Saturday, Feb 5 but the light turnout did not limit the conversation. The meeting was essentially a brainstorming session, with topics that included the state budget, the cost of education and political ethics to libraries, waste water treatment and a change in approach by newly elected New York Governor Andrew Cuomo.
With significant cuts in state funding a certainty, the cost of education was on people’s minds. Cold Spring resident Mary Alice Boyle, herself a teacher in Peekskill, suggested that the Garrison and Haldane school districts are a logical choice for merger. Galef went even further, asking the small audience what they would think of a Putnam County school district. Galef suggested that while individual schools would remain the same, one overall administration could guide such a district, resulting in considerable cost savings. “I don’t live here and I don’t want to tell people what to do. But if I did live here I’d certainly want to look at it” she said. One of the participants blamed unfunded state mandates as a significant cause of the high cost of education to local taxpayers.  Galef acknowledged that if a cap in school district spending is imposed, “We have to relieve mandates.”
Galef said the state legislature faces its fourth difficult session in a row, with a $10 billion budget deficit being the major hurdle. Education and health represent the largest portion of the budget and will see the largest cuts. Galef said she supports streamlining of state government departments as a way to save taxpayer dollars and that the state hopes to save some 450 million dollars in its contract negotiations with employee unions. Addressing the deficit Galef asked, “Can New York State go forward and borrow funds? Do you try to fill the hole by borrowing?” she asked.

Wine was on the agenda, although none was served at the meeting. The discussion centered on whether or not sales should be extended to supermarkets. Galef seemed to be of two minds. From her perspective, supermarket sales would benefit the New York state wine industry but she also wondered what effect those sales would have on small wine and liquor stores.
Potential cuts to library funding were bemoaned by Martin Miller, Putnam County representative to the Mid Hudson Library System and Carol Donick, Director of the Desmond Fish Library. Miller indicated that for every dollar of government funding, libraries return up to $15 in services to the community. Galef’s response was not very encouraging. “The State can’t send out a check if they don’t have the money” she said.
Philipstown resident Ming Wang suggested that the Putnam County Department of Health should look to new technologies and do away with traditional septic systems while adopting new methods for dealing with recycling domestic waste water. Galef said that she would look into the state’s role in making such improvements.
Galef spent some time reflecting on the state’s new governor and his predecessors. She said that New York’s “multiple governors . . . has [sic] not been good” and have resulted in a lack of stability. In her view David Patterson faced an uphill battle because he was not elected – having replaced Elliot Spitzer who was forced to resign as the result of a sex scandal.  “I supported Spitzer’s reforms but the way he treated the legislature was to hit them over the head. People were angry with him.” Galef says that newly elected Governor Cuomo is taking a very different approach. “We just spent two hours with him in a question and answer session. He’s trying to build relationships.”
Passing a budget on time is a major challenge for the new legislature and only time will tell whether or not that will happen, Galef also pointed to ethics as an area that needs to be addressed. “We really need ethics reform. The biggest thing is attorneys” she said. That “big thing” revolves around how to deal with lawyer-client privilege when the lawyer also happens to be a state legislator and the client happens to be someone who does business with the state. “I think we will have an ethics package soon” Galef said.
Galef is hosting another meeting on Thursday, Feb 10 at 7 p.m., also at the Desmond Fish Library, to discuss the pros and cons of financing education through state income taxes instead of property taxes. State Assemblyman Kevin Cahill will outline his proposed bill advocating the switch to income tax-based funding. Frank Mauro, Executive Director of the Fiscal Policy Institute; Edmund McMahon, Director of the Empire Center for New York State Policy; and Martin Reid, Deputy Director of Government Relations for the New York State School Boards Association will also present their views on the proposed legislation.