Robert S. Viggiano, a Philipstown businessman and Fishkill resident, was arraigned Wednesday in Westchester County Criminal Court on a charge of first degree attempted rape. Yonkers police spokesman, Detective Sergeant Patrick McCormack, told Philipstown.info the charges centered on Viggiano’s attempted solicitation of sex with a 10-year old girl. The arrest came as a result of an undercover investigation by the department’s Street Crime Unit.  Viggiano was ordered held without bail in the county jail until a hearing scheduled for Feb. 23. A 47 year-old electrician, Viggiano is owner of Energy Services of New York located at 3590 Route 9.  According to the police, Viggiano is married and has children.
The undercover investigation, involving a police officer posing as a 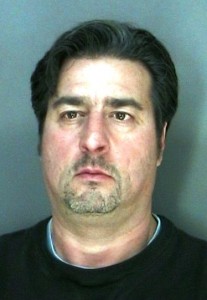 woman willing to agree to allow sex with her young daughter for money, began after Yonkers police heard about a man inquiring about the possibility of such a transaction.  After several phone calls and a couple of meetings with the undercover officer, Viggiano was arrested after he allegedly arrived at a meeting with the agreed upon amount of money and suggested candy for the young girl. McCormack said the police believed they had developed a strong case including video and audio evidence.
According to McCormack, the Yonkers police are asking for the public’s assistance in developing more information on Viggiano and determining whether there were other similar incidents involving the suspect. “We know, for instance, he has worked as a martial arts instructor in the Hudson Valley, but we don’t where,” he said.
Anyone with information they believe useful can call the Yonkers Police Detective Division at 914-377-7724.

Robert Viggiano, of local business Robert Viggiano Plumbing and Heating is not the same Robert Viggiano whose arrest has been detailed here.  He has no connection with the arrested man.  Philipstown.info spoke with Mr. Viggiano this morning and he said “I’m not judging the guy.  Let the courts decide.  I just wanted to be separated from the association.  On paper we’re identical: married, two kids, business in Cold Spring.  Only our initials are different.  I am Robert L. Viggiano; he is Robert S. Viggiano. We are not related, it is just a very unfortunate situation.”

One thought on “Philipstown Business Owner Charged with Attempted Rape”