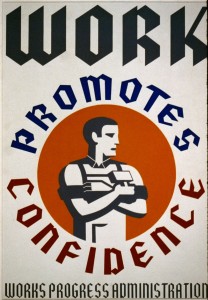 The country needs another Works Progress Administration (WPA II) to lift employment and the beaten-down spirits of some 25 million un-and under-employed workers and their 50 million and more dependents. Despite being two years into this Great Recession (GR), with an apparent return to economic growth late in the 2nd quarter of 2009, the unemployment rate in 2010 (9.6 percent) was higher than in 2009 (9.3 percent) and one almost as high is predicted for the duration of 2011 (9.1 percent).

Off-the-chart numbers from the Bureau of Labor Statistics (BLS) paint an ugly picture of high water marks never before reached: (1) a record high comprehensive unemployment rate of 17 percent (counting those who have given up the search for work and those employed part-time but needing full time work), (2) a record number of those without work for 27 weeks or more, comprising (3) a record 44.3 percent of total unemployed, (4) a record length of unemployment at a mean duration of 34 weeks, the highest since the government began tracking this data in 1948, and (5) record high unemployment rates for males, whether young (for those 16-19 years, 27 percent) or adult (for those 25-54 years, 9.2 percent).

For workers caught in labor’s recession, the worst is yet to come, for the cold BLS numbers fail to capture the declining quality of jobs on offer. Temporary help service work increased by 495,000 since hitting a low in September 2009 with the upward trend continuing in December 2010. Recently that flagrant optimist, Fed. Chairman Bernacke, predicted that it would take at least five years to reduce unemployment to pre-GR levels.

Conditions are without precedent since World War II, depicting the worst labor market crisis since the Great Depression. In October, there were 13.2 million more unemployed workers than job openings, or 6.3 seekers for each available job. This compares to a ratio of 1.8 to 1 at the beginning of the GR in December 2007. Some sectors, of course, are much worse. In construction, the ratio is 18 to 1. And 40 million Americans — one in eight — are on food stamps.

Of particular importance is the growing length of unemployment for a growing percentage of those idled by the GR. These workers lose not just confidence in themselves as the days grow to weeks, and weeks to months, in fruitless pursuit of work. Their skills atrophy, diminishing their value, both to themselves in terms of salary they could command and to the nation in lost productivity. With the passage of so much time, many will become unemployable, even when jobs become plentiful some years down the road.

Whether our government is willing to address these frightful conditions is unknown, but neither Democratic leadership in the White House nor Republican leadership in the House of Representatives gives cause for hope. In his Pollyannaish State of the Union address, President Obama not only glided over the looming deficits the country faces down the road, and their crippling consequences, but failed to even acknowledge the plight of the growing ranks of poverty-stricken citizens.

As for Republican leadership, its effort to repeal health care reform seems driven not by concern over the deficit but by a principled determination to narrow the role of government in alleviating the suffering of its citizens, a role embedded in Teddy Roosevelt’s Progressive Party platform in 1912 and two decades later implemented by Franklin D. Roosevelt in the New Deal.

Could leadership from the White House turn things around? Barack Obama would have to connect the nation’s present character to the vision these two giants established for us in the first half of the 20th century. Everything we know about this President would predict that here is a challenge he could meet if he had the will. Alas, his recent address, which turned our nation’s problems into a global Superbowl contest, provides no basis for belief.

In the Great Depression, unemployment rose from 2,860,000 in March 1929 to 14,597,000 in February 1933. During 1931 and 1932, there were continuous attempts in both Senate and House to pass an unemployment relief bill providing for federal appropriations to aid the states and municipalities, which had exhausted their resources.

President Hoover steadfastly refused to entertain federal aid, fearing national responsibility more than he feared national unemployment and destitution. In a nationwide radio address on Oct. 18, 1931, he said “No governmental action, no economic doctrine, no economic plan or project can replace that God-imposed responsibility of the individual man and woman to their neighbors.”

With the New Deal, came unemployment insurance (UI), intended as short-term relief for the unemployed while they searched for a job. It has been with us ever since. Coverage has been repeatedly extended in this, the longest running recession since the 30’s. Despite these extensions, UI is only received by about one-third of the unemployed. Even for those who benefit, UI bears the stigma of the “dole”, whether called that or not, and that stigma deepens in the psyche of those covered and their families as the period of coverage lengthens. It now extends for 99 weeks, a period without precedent. Steinbeck captured the point in The Grapes of Wrath when Annie Littlefield says to Ma Joad “If a body’s ever took charity, it makes a burn that don’t come out.”

Fortunately, President Roosevelt’s vision carried well beyond charity. In an address before Congress on Jan. 4, 1935, he spoke of the need to put the country back to work: “Continued dependence on relief induces a spiritual and moral disintegration fundamentally destructive to the national fiber. To dole out relief in this way is to administer a narcotic, a subtle destroyer of the human spirit. It is inimical to the dictates of sound policy. It is in violation of the traditions of America. Work must be found for able-bodied but destitute workers.”

Under the leadership of the indomitable Harry L. Hopkins, first the Civil Works Administration and then the Work Progress Administration established work programs based on Hopkins’ conviction that work for the jobless was vastly preferable to direct relief. “Those who are forced to accept charity, no matter how unwillingly,” Hopkins wrote, “are first pitied, then disdained.” These programs paid wage rates sufficient to live on, even if they exceeded local wages for comparable work, but small enough to make private employment preferable. They enlisted workers in projects of lasting importance to the communities in which they were engaged. They avoided projects that would compete with private enterprise. And they diversified the kinds of work to provide the many occupational groups on relief with jobs in line with their training and experience.

In answer to the question of whether these programs were successful, Hopkins had this to say: “In the relief business where our raw material is misery and our finished product nothing more than amelioration, effectiveness has to be measured in less ambitious terms than success. That word applies better to marginal profit, cash or otherwise. Relief deals with human insolvency.”

The labor crisis we face today is every bit as threatening to worker spirit and morale, and to national fiber, as the one that confronted Roosevelt when he took office. UI is not enough. Today’s unemployed are no different from their predecessors. They want to work and be paid for it. Converting every UI check into a check for work done on projects the country desperately needs and can take pride in ought to be our national goal.

The WPA transformed the physical face of the country, leaving a visible legacy that benefits all Americans to this day. Roads, schools, bridges and dams. Think of the Cow Palace in San Francisco, LaGuardia Airport in New York City, the Timberline Lodge in Oregon, the Outer Drive Bridge on Chicago’s Lake Shore Drive, and the River Walk in San Antonio.

The President must press Congress for WPA II. It is not only too dangerous to the country to wait and see if steps already taken prove adequate. Facing human misery on such a grand scale, with the path to relief clear, failure to act becomes the policy of a cruel and uncivilized nation. Even if a genius of Harry Hopkins’ caliber could be found, it would take the better part of a year to establish the agency, identify worthwhile projects and deploy workers to carry them forward. Given the frightening forecasts and growing tales of human suffering, we need to act now.

The $787 billion American Recovery and Reinvestment Act, enacted in 2009 and known simply as the stimulus, allotted only $72 billion, less than 10 percent, to infrastructure projects. This was a huge opportunity to marry the needs of a swelling tide of unemployed to the country’s rapidly growing need for investment in its infrastructure, including, among other priorities, road building and repair, clean water supply, enhancement of the electrical grid, repair of bridges, dams and levees.

Through government, the public pays for infrastructure, whether before failures occur, or afterwards. It also doles out UI checks while recipients remain idle, eager to work. The President could yoke these two national goals together and, through a new WPA II, design a single solution to address them both. In so doing, the President could begin to restore among its citizens the pride in government they have steadily lost in recent decades. In 2009, the stimulus package missed this opportunity. Now, in 2011, it would be beyond the normal bounds of tragedy to miss it again.