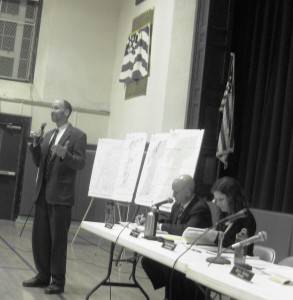 Part One of Philipstown’s long-anticipated formal public hearing on the draft rezoning brought praise — even from former antagonists — for both the Town Board’s efforts and local democracy last week but generated lingering complaints as well. Nearly three years after the first rezoning draft debuted and 18 months after the second iteration sparked months of controversy and spawned a succession of reworked versions, the Feb. 9 hearing in a Haldane Central School gym drew about 80 attendees, far fewer than the hundreds who packed often-rancorous forums in September 2009 and April 2010. To accommodate any others who wish to speak, the Town Board extended the hearing, with a second session to occur in the Town Hall at 7:30 p.m. on Wednesday, Feb. 16.  Noting the many empty chairs, Supervisor Richard Shea said the turn-out was “much smaller than what we anticipated” and thanked those who braved the cold weather and icy streets. “I also want to thank all the members of the public who had input into this document to get us to where we are tonight. I think we have a real communal document.”

The rezoning would establish nine districts:

1. Rural Conservation (RC), “to promote land conservation, agriculture, forestry, recreation, and the preservation of open space, as well as other compatible rural uses, by encouraging such activities and by discouraging large-scale residential development, while allowing low-density residential uses.”

3. Rural Residential (RR), for “residential uses in a rural setting at a lower density than is allowed in the hamlets.”

4. Hamlet Residential (HR), with “the traditional scale, density, and character of residential hamlets such as Continental Village, as well as residential neighborhoods surrounding designated hamlet-mixed use areas.”

5. Hamlet-Mixed Use (HM), for “creation and expansion of hamlets in the traditional scale, density, architectural style, and mixed-use character of the existing hamlets of Garrison and Garrison Landing and of the Villages of Cold Spring and Nelsonville.”

6. Suburban Residential (SR), “to maintain the character of existing suburban density residential developments and to allow a limited extension of suburban growth patterns.”

7. Highway Commercial (HC), for “commercial uses that rely heavily on automobile and truck access and that would not be compatible with a hamlet mixed-use area.”

8. Office-Commercial-Industry-Mixed Use (OC), “for light industrial, service commercial, office, and research facilities,” along with, “where compatible, housing and limited retail commercial development intended to support the primary uses or to provide adaptive re-uses for existing commercial or industrial buildings.”

9. Industrial-Manufacturing (M), for “industrial and related uses that are not compatible with most commercial, office, or residential uses, in isolated and well-buffered locations.”

In addition,  to “provide additional protection of important environmental resources” as well as “permit certain types of economically productive uses that would not otherwise be allowed,” the draft rezoning superimposes eight “overlay districts”:

Before ceding the floor to the public, Shea discussed the HPO, one of the “hot issues that came up at the end.” The November 2010 zoning draft, the latest version, defines the HPO as a means to foster “adaptive re-use of buildings that are listed on the National Register of Historic Places that are on parcels of 15 acres or more, in order to provide economically viable ways to rehabilitate, maintain, and re-use them.” According to the draft, the HPO offers owners of these sites “greater use flexibility than is allowed by the underlying zoning” if they agree to “significant protection of historic and open space resources.” 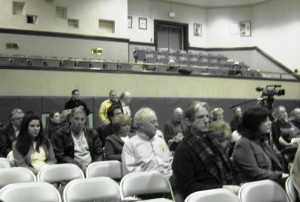 Members of the audience listen to presentation

Shea explained that the HPO had evolved from a property-owner’s suggestion and the board’s consideration of ways to preserve historic old estates, with their elegant but sometimes deteriorating mansions, no longer home to the 19th-century robber barons and financiers who built them. Including the HPO “wasn’t ‘doing favors’ for someone,” he said. “I think there was a misperception about this being done so late in the [rezoning] process. Do you think we would bring it this far and then try to sneak something in to completely derail the process? It just wouldn’t make sense.” Shea said the HPO would permit old estates to be fixed up and utilized in “some commercial way that is appropriate for the neighborhood.” He acknowledged that friction arose over limiting the HPO to sites of 15 acres or more but said the acreage requirement was included to provide a buffer for neighbors. “We want to be able to use these buildings. People rehabilitate them and they won’t end up falling down and becoming a liability. It brings commerce to the town. It brings people to Main Street,” he said.
The provision as drafted awaits revision, though. Audience member Lew Kingsley observed that under the current language a mansion “could be trashed” as the owners “preserve the property and not the structure,” on parcels of 15 to 20 acres. “You’ve pointed out a drafting error we need to correct,” Joel Russell, the board’s rezoning consultant, concurred.
Representing Castle Rock LLC, the firm that now owns the 1880  Osborn Castle in Garrison, Richard O’Rourke thanked the Town Board “for listening to us, because what you’ve done” in creating the HPO “is to provide an opportunity for these kinds of properties to be preserved. You are actually encouraging the restoration.” Repair of the castle is now underway, already “a time-consuming, laborious and very expensive process,” he said. Owners of such estates need to be enabled to recover the costs of their effort, he said. “You’ve done that.”

Citizens of Philipstown.org (COP), a group highly critical of the rezoning in earlier drafts, also praised the board for listening and working with its members. Al Butzel, a lawyer working with COP, said the group had feared changes that would reduce small businesses’ options, to their detriment and that of the town. COP made “proposals that would alleviate their concerns and ensure that businesses going forward would be able to continue what they were doing and would not be bound” by onerous new regulations, Butzel said. “Happily, the supervisor [Shea] made perfectly clear that he was open to suggestions and glad to meet with my clients. All those provisions were incorporated into the revised rezoning ordinance with one exception,” which he couldn’t even remember, Butzel said. He added that he and COP hope the proposed rezoning keeps “moving forward to conclusion and acceptance.”
Lee Erickson, president of COP, speaking as a private resident, even urged a bit of further local-government control, in regard to home-based businesses. He recommended that those who work out of their homes be required to obtain a free permit. “I’d like to ensure that this privilege isn’t abused or taken advantage of,” he explained.
Fred Osborn, a descendent of the Osborns who came to the Hudson Highlands about 150 years ago, said that once families such as his owned huge tracts, eventually giving them away to create state parks. Newcomers have continued to arrive because, like the early Osborns, they noticed “the area was gorgeous, the scenery was bucolic, the people were hardworking and fascinating,” he said. “What this zoning is doing and what land-use control does is give to those who have chosen to live here “¦ the control over its future. And that’s our future.”

Not all attendees were pleased, however. Ming Wang said she had bought land about 30 years ago and that the revised zoning would prevent her from pursuing its development in a subdivisions and thus “take away my rights.” She claimed that by including her land in a conservation overlay, instead of having one dwelling unit per acre the rezoning would force her to supply 15 acres per unit. That entails “a mandated 80 percent open space,” she said. “Is this fair? Can government force me to involuntarily donate so much land for open space and [I] forfeit my right to develop? For those who desire more open space — they can purchase additional acreage to create open space at their own expense,” she said.
Russell told her that the Open Space Overlay “does not require 15-acre lots. It requires — if you do a conservation subdivision, which is what the law prefers — it’s 5 acres per unit, not 15, and there’s no minimal lot size.” A conservation subdivision clusters housing in an area to allow open space around it, in contrast to a typical suburban-style subdivision which provides little open space and can lead to sprawl.
East Mountain Road North resident F.J. Spinelli likewise opposed the rezoning and said he had done so “from the start. And yet never have my concerns been answered or addressed by this Town Board. The arbitrary placement of my property in a rural conservation district with the Scenic Protection Overlay while my neighbors in the same area are not held to the same standards or restrictions is unjust and insulting,” he told the board.
Andree Monroe complained that the rezoning would place her Old Albany Post Road property in a rural conservation district. She wants it to continue to be classified as a commercial-district property. “If you leave me in a rural conservation district you are violating my Constitutional rights, specifically the 5th and 14th Amendments, by being denied due rights and equal protection of the law,” she told the board.

The thankless task
Stephen Ives, a Garrison resident, thanked the board for its diligence in pursuing the rezoning, which he described as “in many ways the most thankless task that any group of elected officials could undertake. It’s not been easy,” he said. “I would say that on a lot of occasions the meetings have been less than civil. We’ve heard a lot about property rights over the course of this debate. But I think what’s been missing often in the conversation has been the rights of the community.” He referred to the difficult job of balancing individual rights, such as property rights, against community good. “I don’t know any better way to do that than what we have done as a town here.” He, too, urged the board to approve the current draft and promptly make it law.
Photos courtesy of Glenn Watson and Mike Armstrong