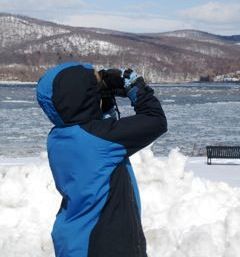 Getting up close with the eagles

The awe-inspiring sight of bald eagles flying above is a privilege granted to those of us living in these parts, each December through March, when these majestic birds make their way down from Canada. The fourth grade science curriculum at Garrison School has animals and adaptation as the focus for the first part of the year.  The students incorporate what they’ve learned into a research project on an animal.  Having these eagles nearby at this time of the year “coincides perfectly with the curriculum,” according to teacher Amy Kuchera.  In a three-part program, naturalists Rich Anderson and Rebecca Schultz of Constitution Marsh paid two visits to the classroom, educating the children about eagles in creative ways, for example filling up a gallon container with water, as that’s how much an eagle weighs.  In studying migration, the children used longitude and latitude data to plot the annual journeys of these birds.  A special board game invoked transposed advances and deterrents: you found food — move three spaces ahead; you ate pesticide, move four spaces back, etc.  Schultz, the new Education Manager at the Marsh said she was “amazed to see how receptive the kids have been to all of this.”  She added that she had seen her first bald eagle a mere two years ago, and how wonderful it was “for the kids to have the opportunity to see so many.” 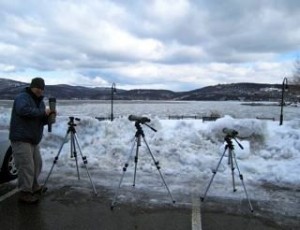 Rich Anderson sets up the telescopes

On a recent cold and windy, but finally snow- and ice-free Tuesday (the trip had been canceled twice previously due to this winter’s weather), Mrs. Kuchera’s class headed to Peekskill’s Charles Point, also known as China Pier, where they met up with Anderson and Schultz, who had arrived earlier and set up three telescopes. (The eagle-watching was supposed to have taken place at the Marsh, but the icy road conditions made it impossible).  The children scrambled off the bus excitedly, oblivious to the weather.  Many had brought binoculars.
The kids spent the next hour or so avidly spotting eagles. Anderson was able to sight 22 of them on the day, and he noted that this particular spot was optimal because the ice had broken up into chunks more than further north—the first big opening in the river—meaning that the eagles were able to obtain fish more easily.  Also on view were great cormorants (not to be confused with summer’s double-crested cormorants which fly south in winter).  According to Anderson, Assistant Director at the Marsh, “the great cormorants come down from the Maritime Provinces and hang out here.” 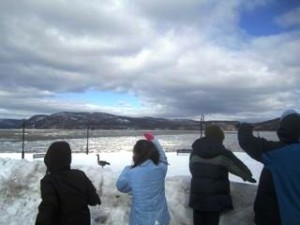 Even a goose spotting got the kids excited

Philipstown.info asked a group of girls what the most interesting thing was that they had learned about eagles. This dialogue ensued:

A boy added his ‘most interesting thing’:

“I can’t believe they go into that freezing water to eat fish.”

Anderson concluded the program by asking the entire group a series of questions: “Why are they here? “Where’s the best place to see them? Where do they come from? “When do they go back?” What do they do when they go back to Canada?”  Anderson also pointed out there are also a few resident eagle pairs living around this area, who dwell here year-round.
Constitution Marsh will be hosting an eagle-watching weekend, open to the public, on Feb. 26 and 27.  Reservations are required and there are limited openings available.  To reserve, call the Marsh at 845-265-2601, extension 10. Visit http://www.constitutionmarsh.org/ for more information.
Photos by A. Rooney