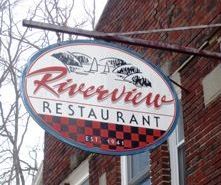 Is there someone in one of our local stores or businesses who always makes you feel welcome, or well taken care of?  In Philipstown, we often interact multiple times daily with people we don’t know much about, but whose company we briefly enjoy. This is the fourth in a series of stories about that interesting person “Behind the Counter.” This edition’s subject was suggested by a reader, who was impressed by both the quality of the meat and fish and by the great advice provided by Nick Ely, the man “Behind the Counter.”  By chance, this reporter had recently had a meal there, and the excellent server was Natalie Ely.

Once upon a time there was just a restaurant.  The kind that’s open six days a week for both lunch and dinner and where the food is great so it’s always busy, busy, busy.  A mom and pop operation where mom and pop do everything, from making the runs down to New York City to pick up provisions, to front of house, to accounting to captaining the ship full of employees cooking up a storm in the kitchen.  A restaurant that is more like, in his words, “a circus, a carnival,” according to that captain, Jim Ely.  So, one would think, after about 20 years of this carnival, downtime would be scarce and keeping the restaurant going strong would take up every bit of energy for Jim and his wife Lori. But, like many captains, Jim saw other possibilities flickering on the horizon, and, after a long planning period, Riverview Home Chef was unveiled about two years ago, with Jim and Lori’s son Nick heading up the operation. 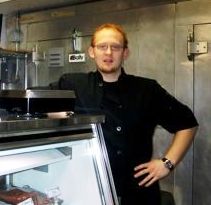 Nick Ely: next to the counter if not quite behind it

“It was dad’s idea to start this up.  He was waiting for me to come back from Long Island, where I was living,” says Nick.  “He had been thinking about it for 20 years.  First we had the drive-by window, where people could pick up take-out orders, but people were always calling and asking for ‘raw’ foods.  At the bar, dad would be asked about various items.  It’s hard to get restaurant quality foods.”  So it was dad’s idea, but how did his son feel about it? “I wanted to do it,” said the Cold Spring-raised Nick, “I’d always been in the restaurant, seen everything go from raw to cooked, so I was excited by this idea.” Nick, along with his siblings, has worked at the restaurant since a young age, including stints as a bus boy and a lot of time in the kitchen.  He is pleased that “now I’m producing a service instead of pouring water. I’ve done every job in the place.”  He’s also learning continuously, “just the vocabulary alone.  If the customers know it, I have to know it too.”  This education is important, as a key element of Nick’s job is passing along information to the clientele. “A huge part of the job is educating customers on how to cook.  Everybody asks things like how many minutes, etc.  They’re often scared away from things because they don’t know how to approach them.  If I don’t know and ask my dad, he always tells me ‘go cook it yourself to find out.'”
The working day begins very early for Nick as he travels down with Jim several times a week to the Fulton Fish Market and the Hunts Point Co-op Market in the Bronx to select the best and freshest ingredients.  They wake up at around 1 a.m. (yes, that’s wake up) to make the trip.  These trips have been going on for 20 years, but Nick’s role in these expeditions has changed through the years, “I used to go when I was a kid.  I’d get up at 1 a.m., sleep during the ride, come back out of the van at Cold Spring and get on the school bus.  Back then I could sleep.  Now I have to load the van, write the checks.” 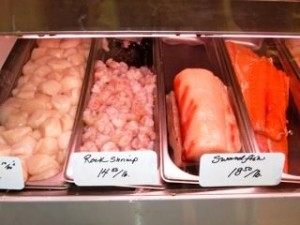 An array of seafood fresh from the fish market

Riverview Home Chef began, as most businesses do, with a little guesswork, in terms of what to stock and what the top sellers would be.  Nick says “in the beginning we used things we could also use in the restaurant.  Slowly we’re seeing the things that don’t sell or the things that people buy most of. Now we have many more items than we use at the restaurant.  We also have a lot more prepared foods now.  People don’t always have the time or knowledge to do this themselves.  We have our beef stew every day – – it’s very popular.”  The best sellers also include “Chatham Bay cod; it looks so white and so attractive; salmon—we sell five or 6 whole fish—they’re around 20 pounds—on the weekend, it’s a huge seller; the prime top butt, which is basically a roast beef; and the New York strip loin.  Some people come in twice a week for it.  I’ll recommend it, they won’t really know it, they buy it and come back a day or two later saying ‘I have that taste in my mouth and I want more!’  We also try to have some healthy things, and always things that are not in the supermarket.”
Riverview Home Chef strives to have a balance of the right items, from the affordable to the specialized, “Every week we spend at least an hour looking for a new fish or a fish that might be cost-effective.  We don’t want to sacrifice freshness, but we understand that people can’t eat the most expensive thing every day, although certain items that people want, they cost.” The care taken in the selection is reflected by the loyal customer base.  Nick relates how “one guy drives in from New Jersey every week to pick up a couple of hundred dollars worth of stuff, which he freezes.  We also have three people from Beacon who drive over about three times a week just for oysters.  A lot of people pre-order for the weekend on Wednesday or Thursday.”

(At this point the interview was briefly interrupted when Nick went to open the door for “grandma—she comes in every day for scallops, and to drop off the newspaper” this truly being a family restaurant!).

Nick would love to be able to expand someday beyond the converted storage area now used as the retail establishment.  He’d like to have a spot on Main Street, or perhaps in the Foodtown complex, because “habits are hard to break, and sometimes people forget that we’re here.”  Still, for the time being Nick can be found “Behind the Counter” right next door to the Riverview kitchen, and he mentions that the doors to the kitchen are intentionally made of see-through plastic, as customers are encouraged not only to look into the kitchen, but to check through the kitchen’s recipe book if they’re interested.  “If they want to know how to make something it’s right there, it’s not exclusive. We’re happy to help.” 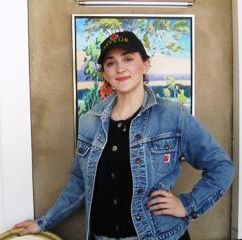 Also helping out with the restaurant is Nick’s younger sister, Natalie, who has been working at Riverview since her graduation from Haldane in 2008.  Waitressing from Wednesdays to Sundays and sometimes picking up other shifts, Natalie is a familiar face to many of the customers, many of whom have known her since she was knee high to a plate of pasta – – and comment on it!  “I get to know everyone, everyone comes in, locals, and more and more people from Rockland, New Jersey, everywhere.” Natalie started working, “in one way or another” from about the age of seven, and feels that her parents listen to any suggestions she might have. “I think Dad is open to anything I have to say.  I don’t have much to improve upon, just little things – – especially with staffing and communication.  But the food is all my Dad – – a whole other story.”  And Natalie has tried “all the food, and I’m not just saying this, but I’ve never had a bad meal here; I enjoy every meal.”  Favorites? “I just love the sautí©ed vegetables, I like the stew, the salads, everything.  I was a picky eater as a child.  I only ate rice or pasta with butter sauce, but then I tried an oyster.  And I thought if I can eat an oyster, I can eat anything.  Now it’s nice to see the whole art of buying it, cooking it and putting it on a plate—it is an art.”
So what’s the best part of working with family”¦and the worst part? “We’ve all definitely gotten closer.”  And the worst?  A very quick answer: “You can’t ever call in sick. It’s definitely a bummer sometimes when you just don’t feel like it. They KNOW!” The second generation at Riverview has just added another member, by the way.  Nick and Natalie’s little sister, Naomi, is not so little anymore.  She’s got her working papers and has just started moving her way up the food chain at Riverview: you can find her there, doing what else”¦? Busing tables.
Photos by A. Rooney

Riverview Restaurant is located at 45 Fair Street, in Cold Spring. Hours are: Tuesday through Sunday for lunch and dinner. Closed on Monday

For more information and to check out the daily menu postings, visit www.riverdining.com

To suggest a future Behind the Counter subject, please send an email to [email protected]

Check out the previous Behind the Counter stories:
Michele Risko at D. Yannitelli Fine Wines & Spirits

3 thoughts on “Behind the Counter: The Second Generation at Riverview”