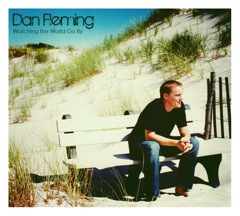 The Listening Room has brought more than two hundred singer-songwriters to Cold Spring to perform their original material in a little more than two years. The artists’ music has had an impact on the village and now it seems the village is also having an impact on the artists. They’re starting to write about it. Dan Fleming has just released his first CD, “Watching the World Go By” and it features a song about Cold Spring. “Christmastime in Cold Spring,” with its references to a snowy Main Street, hot soup at the Foundry Cafe and an icy Breakneck Ridge, captures the feeling of the village in winter – certainly something that residents can relate to this year.
The CD includes ten songs, nine of them written by the 33-year old Fleming. “Place” is an important thread that ties several of the songs together including settings beyond Cold Spring. “Rhode Island” conjures up images of friends getting together for horseshoes, wiffle ball and campfires. “Exit 67” captures the romance of New Jersey’s Garden State Parkway.  You read that right. “My girlfriend, now my wife, is from Barnegat, N.J. at exit 67. In New Jersey they always ask what exit you’re from. I thought it would be a fun title for a song about our relationship when she lived there” Fleming said. “Better than Alone” follows a pair of lovers from a diner to a bar and then to a house. The title song, “Watching the World Go By,” speaks of Boston’s Charles River and love gone awry. Fleming feels that song encapsulates what the CD is about. “It’s largely an observational compilation of my life over the past 5 years” he said.
The CD has been a labor of love for Fleming. From the time he made up his mind to do it. the project took him about 200 hours, spread over a year a half.  “It could have been a lot shorter but since I work full time it had to be done largely on weekends.” That meant many drives of more than an hour each way to the Roots Cellar Recording Studio in Newburgh which is operated by Todd Giudice, another musician who often plays in Cold Spring. The weekend work took its toll. “There was one night I tried recording vocals after a full day of work in the city. I was just too tired to record a fresh track” Fleming said.
Guidice produced the record and also played guitar and helped out with vocals. A number of other local musicians also lent their talents to the project including Al Hemberger on bass, Ted Hemberger on drums and Art Labriola on piano and pedal steel guitar. Ken Veltz played drums on “Christmastime in Cold Spring” while Amy Laber and Jenn Clapp provided backup vocals on some of the songs. Fleming said that knowing he had that musical support was one of the most positive aspects of the project. “The easiest part to producing the CD was playing with the other musicians. They helped to lay down a nice groove and made the songs come alive.” The impact of that musical support on the final product was also not lost on Fleming. “What surprised me most about the process was how much the songs can change when adding those additional instruments.”
While recording the music may have been the easy part, paying for it was not nearly as much fun. Fleming estimates that the CD cost roughly $10,000 to produce. He has begun promoting the CD via social networking sites such as Facebook, My Space and Reverbnation, as well as on his website www.danflemingmusic.com He is also distributing review copies to independent artist magazines and radio stations.
It’s been a learning experience for Fleming. He already knows what he would tell other singer-songwriters contemplating producing their first CD. “I would tell them to have [the] “¦ songs really nailed down. You don’t want to be spending time working on songs during the recording process. Have 15 songs ready to go and then whittle it down to the best 10. I would also try to have all the songs I wanted to record with other musicians down and ready ahead of time and record them all in the same weekend.”
Now that the CD is done, Fleming is taking a bit of time to savor the moment. “It felt like I had completed a long journey. There are so many stages to go through from initial conversations about the album concept, recording the basic tracks, layering in additional tracks, mixing and mastering. To finally have it done was a great feeling of accomplishment.” And who did Fleming give the first CD to? “My brother-in-law Matt. He had the honor of being the first person to buy my CD. It was a signed copy – but at a special rate.”
Fleming, who also plays in a cover band called “Space Cabbage,” began playing the guitar when he was 19. He started writing after studying songwriting at the Berklee College of Music in 2002. He will be performing at Whistling Willies in Cold Spring on Thursday, Feb. 24 along with Al Hemberger and Todd Giudice.