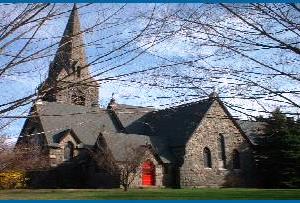 Bishop Mark S. Sisk, the leader of the Diocese of New York, visited Cold Spring on Sunday (Feb. 27) to officiate at the baptisms, confirmations, or formal entry into the Episcopal Church of 12 parishioners at St. Mary’s. In the Episcopal Church, baptism makes a person part of the church and confirmation allows the baptized member to express a firm, mature commitment to Christianity. Those already baptized and confirmed in other denominations can be formally received into the church as Episcopalians.
In his remarks from the pulpit, the bishop urged all present to refrain from being too reticent or insular about their beliefs and to bring their individuality into the community. “It is so crucial that you use this moment to speak up,” he told those about to be baptized, confirmed or received into the church. At the same time, he added, the congregation needs “to speak up a bit so they [the newcomers] know they are accepted. Nobody can be a Christian by themselves.” 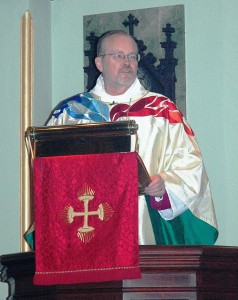 Bishop Sisk preaches from the pulpit.

The 15th bishop of New York, Sisk oversees a diocese of more than 200 congregations in Putnam, Dutchess, Orange, Rockland, Sullivan, Ulster, and Westchester Counties and Manhattan, the Bronx, and Staten Island in New York City. Born in Maryland in 1942 but no stranger to the Hudson Valley, Bishop Sisk served early in his ecclesiastical career at St. John’s Church, Kingston. An experienced carpenter as well as a priest and theological educator, he is building a house in the Catskills, largely with his own hands.  Fond of horses and never too old for new skills, he learned to ride at age 50.  He may soon have more time to enjoy it — and finish his house.  At his request, last December the diocese convened a committee to search for a co-adjutor bishop. Co-adjutors can minister alongside a senior bishop for a time before the latter retires. Bishop Sisk himself was a co-adjutor of the New York Diocese before becoming the head of it in 2001.
At St. Mary’s, Jeanne Tao and Naomi Cook were baptized and confirmed; Shane Bordeau, Joseph LaBelle, Ryan Shubert, Mary Ann Lombardo, Rick Allen, and Shannon Bird were confirmed; and Lindsay Kennedy, Neil Oettel, Stephanie Hahn, and Ruth Eisenhower were received into the Episcopal Church.
St. Mary’s Episcopal Church is located at the corner of Chestnut Street (Route 9D) and Main Street (Route 301) in the center of Cold Spring.
Photos by L. S. Armstrong