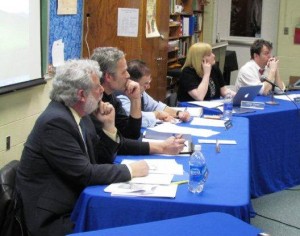 The nuts and bolts are starting to be put in place as administration and trustees struggle to draft what will be one of Haldane’s most difficult budgets in recent memory.  At the Mar. 1 Board of Education meeting, Superintendent Mark Villanti laid out a number of key elements that will likely become part of a proposed 2011-12 budget; along with a less than one percent increase to the tax levy. The small increase will be accomplished through spending cuts and contributions from reserve funds; for combined savings of approximately $482,000. The measures are necessary to make up for anticipated cuts in state funding and the end of federal economic stimulus monies.
Villanti told trustees that other school districts will likely exceed a two percent spending cap but that such a move would not sit well in Philipstown. “There’s no appetite for a tax increase. Tell me if you feel differently.” School Board Vice President Joe Curto agreed. “I don’t think the community has an appetite for a tax increase. If they do, they better speak up.”
Villanti’s proposed spending reductions include hiring a part-time Spanish teacher rather than full time — a move that troubled some trustees. “Of everything on your list, the Spanish teacher probably concerns me the most” said Gillian Thorpe. Villanti said that eliminating the full time teacher would save money but increase class size from the 16-20 range to closer  to 30 students. Trustees Curto and Evan Schwartz also questioned the wisdom of the part-time approach, saying that it would likely mean hiring someone with less experience, which in turn would make the larger class size more of an issue. Villanti said he will look for alternative budget options that would cut spending but permit hiring a full time Spanish teacher.
Villanti outlined other proposed measures to moderate the tax increase. Teacher retirements will result in projected savings of $100,000. Proposed staff reductions also include keeping a Special Education teacher at 60 percent of a full time position while eliminating a typist and a teacher aide through attrition. The summer school budget will be trimmed by $10,000 and will focus on primary grades. Building and athletic budgets for materials and equipment will be reduced by five percent. A fund balance of $500,000 along with $330,000 from reserves will be applied to the budget.
Before dealing with dollars and cents, Villanti outlined a number of values that guided his budget recommendations, including preserving instructional programs and supporting shared sacrifice while staying true to goals outlined in the District’s strategic plan. Cold Spring resident Vitanza made it very clear how he thinks the District can reduce any tax increase. “How come nothing is ever said about teachers’ salaries? If things are that bad they don’t need a raise. Taxes are out of control. Teachers should take a cut. And they should pay more for health and pensions. $100,000 is better than no job” he said. Vitanza didn’t spare Villanti either. “Nothing against superintendents but I’ve done my research. It  [superintendents’ salaries] is out of control.” 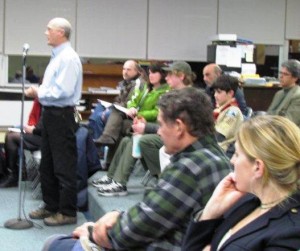 “In defense of Mark, he’s taken a pay freeze” said Board President Dave Merandy, “and you have to understand collective bargaining. They [teachers] get a  two percent increase regardless.” Merandy was referring to the “step” process which provides automatic annual salary increases to teachers through a ten year period. Haldane is currently in contract negotiations with unions that represent teachers and support staff. When Villanti pointed out that the tax increase in Philipstown (as a result of school spending) has been less than two percent for the past four years, Vitanza softened his tone. “I have to give you credit. Compared to other schools you’re doing a good job. You just get tired of it. Every year – there’s cuts here and there – but not the teachers. It’s out of hand.” Curto commented, “I’m a private sector guy. Schools operate in a different world. It’s crazy. The State tells you what you have to do but they don’t pay for it. If we just had  some wiggle room [regarding unfunded mandates] it would be better. The state and federal governments must address that.”
Director of Facilities Wayne Robinson also highlighted budget proposals for operations and maintenance and transportation. The operations and maintenance budget will see a reduction in spending of three percent. The transportation budget will be reduced by 32 percent, excluding wages. One of the big reductions was the elimination of $100, 000 for the purchase of a bus. While that purchase has been removed form the budget it will be put to voters as a separate item for approval. Trustees will vote to adopt a budget in April. It goes to voters for approval in May.
Photos by M. Turton