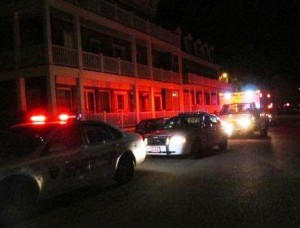 Neighbors say it was Joseph Peterson

Several officers of the Putnam County Sheriff’s Department, along with emergency medical technicians, found a Cold Spring man dead when they converged on 32 West Street, an apartment house on the riverfront just north of the Village Dock, at approximately 7:30 p.m. on Wednesday, March 2.

Sheriff’s Sergeant James Babcock declined to identify the deceased or provide details of how the police were alerted to the situation or any other aspect of the case.  “We have an unattended death, it’s an ongoing investigation, that’s all we can say,” he said Wednesday evening.

Thursday morning Cold Spring Police Officer-in-Charge George Kane said his department had assumed responsibility for the case, adding only that the deceased was 74-year-old male who died of natural causes.

Neighbors, however, said the deceased was Joseph Peterson, who suffered from various ailments, including the burden of a prosthetic leg.  “He had a friend who checked on him and the friend couldn’t get a hold of him for a few days, I think that’s who called the police,” said one man who asked not be identified.  Another woman volunteered that she heard emergency medical technicians say that the death had likely occurred in the previous 24 hours, but that could not be officially confirmed.

Musician Ken Veltz, who lives nearby, described Peterson as someone he saw regularly in the neighborhood. “He was a wonderful guy, just wonderful,” he said.  Veltz also identified Coffee, a light-brown dog he knew as Peterson’s. A man, who declined to answer questions, was attending the dog, which appeared badly depleted.   After trying to encourage the sad-eyed dog to walk around the street a little, the man picked the dog up and placed it in his truck and went back to ask the police if he could leave.