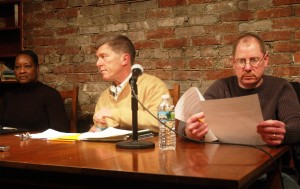 Catharine J. Square, Bruce Campbell (center), and Ralph Falloon await the next round at the candidates' forum.

Cold Spring’s incumbent Trustees Bruce D. Campbell and J. Ralph Falloon took on challenger Catharine J. Square Wednesday night (March 2) at a candidate’s forum, trading sometimes heated views over issues of government transparency and disfunctionality. During the event, sponsored by Philipstown.info, the two incumbents also disagreed with Square about an incident last May when – – reportedly without approval — she used her title as a member of the village Special Board for a Comprehensive Plan to join Trustee Airinhos Serradas and District 1 Legislator Vincent Tamagna in scheduling a meeting with then-Rep. John Hall’s staff on federal funding for a local government project.

Explaining their motivation in seeking re-election, both Falloon and Campbell cited their experience, willingness to continue serving, and attributes of the current administration, in which they often — though not always — side with Mayor Seth Gallagher on contentious issues. Gallagher, too, seeks re-election this month and faces former Mayor Anthony Phillips in a rematch of 2009.
Campbell first became a trustee in 2002, under then-Mayor Phillips. Ousted in 2006 by Gallagher, who ran that year for trustee, Campbell made a comeback three years later. At the invitation of Gallagher, elected mayor in 2009, Campbell agreed to serve as deputy mayor. “As deputy mayor for the past two years, I’ve done more than I’d ever done on the Village Board and I’m very grateful to Mayor Gallagher for that opportunity,” he said. Retired from West Point, he enumerated the roles he plays in village government, which include serving on the village audit-finance committee, co-chairing activities involving the waterfront and highway department and the Route 9D corridor, being liaison to the Haldane School Board, village Comprehensive Plan board, and Recreation Commission, and working with such other government agencies as the Putnam County Sheriff’s Department. “I’ve got a lot of time invested in this job and I really like working with this administration,” which, he said, “has been a little more transparent and open” than others.
A professional firefighter in Stamford, Conn., Falloon also has been a member of Cold Spring Fire Company No. 1 for about 25 years, which he once led as president. His involvement in fire department governance proved good training for becoming a trustee, he said. He noted that in 2009, both Gallagher and Phillips asked him to run for office. “I’m proud to serve the village residents,” he said. “As a trustee, I believe I’ve demonstrated the ability to work effectively, collaboratively, and respectfully with my colleagues. I find that’s very important in the work that we do.”
Square briefly mentioned her background as a Dallas police officer, member of the U.S. Air Force, and cancer survivor and current job in a Beacon school office. She said that “politics is not my career.” She said her interest in pursuing office could be summed up in “three words: I get it. I believe in democracy. I get it that people are angry with institutional excesses which affect all aspects of our lives. I get that we need a better functioning village government. I’m running for village trustee because we need true leadership at this time. I can provide that leadership because I offer a different choice.”

The question of whether the Village Board functions properly provoked spirited debate. “We interact more like a family” than not, Falloon said. “There’s the bickering and the fighting. But at the end of the day, I do feel the process works well for us. It’s good people do hear what goes on, because it’s important. We interact well with the community.” He added that he did not see the need for major changes. “I think it’s working the way it’s supposed to.”
Campbell concurred. “I know the transparency we talked about is definitely there.” Moreover, he said, “90 percent or more of the things we decide on a regular basis are across-the-board. There are challenges, at times,” he admitted. “I think the effort has always been there; I think we’re always improving. The fact that this administration has a record of promoting transparency is definitely an asset. I hope to continue working that way.”
Square disagreed. “From the outside looking in” at the Village Board, “I find it quite dysfunctional,” she said. “You may sit in your office or work on a report. I can’t determine how you say it’s transparent. It may be 20-30-40-50 percent transparent. I’d like for it to be 100 percent transparent. You can’t just say something is transparent.” Furthermore, she said, “you talk about bickering. You’re not just bickering. It’s very, very deep divided divisions. And it’s so divided it’s kind of pulled this community apart. And I don’t like that. I don’t want it to be the village against the Town [of Philipstown] or the village against the county.”

An argument over who speaks for the Village — revisited

Square brought up her own experience last May. “I have myself been ridiculed for trying to offer some assistance to the Village Board. And I get knocked in the head about it when I’m trying to help a county legislature or I’m even trying to help the Village Board,” she said. The May controversy erupted when Square sent an e-mail to Gallagher at 10:52 p.m. May 24, suggesting he attend a May 26 meeting she had arranged with Tamagna and Serradas and Rep. Hall’s aides to discuss financial support for consolidating local facilities on the old Butterfield Hospital property. She claimed to have been “tasked with speaking to pertinent government officials regarding the Cold Spring post office and its possible relations with the Butterfield site, as well as other state and county officials pertaining to Cold Spring and its future,” and tacked on a prior message to Rep. Hall that elaborated plans for the Butterfield site, including relocation of the village offices, and ended with her name and the title “Comprehensive Plan Special Board.” Gallagher asked that the meeting be cancelled and it was. At the Village Board’s regularly scheduled meeting May 25, he objected that neither Square as a solo member of the Special Board nor Serradas as a lone trustee were authorized to contact a Congressional office and represent the village. At the time, Square said that “if I stepped in the wrong pot or went down the wrong road, I apologize for it.”
On Wednesday night, she defended her action. “I tried to set up a meeting with our Chairman Tamagna and the Village Board, and yeah, you have said maybe I went about it the wrong way,” she told Campbell. “I don’t think I went about it the wrong way. That was Chairman Tamagna’s meeting. It wasn’t the Village Board’s meeting. It wasn’t Mayor Gallagher’s meeting. And for someone to go cancel someone else’s meeting is not appropriate. And I got beat over the head about it and I didn’t appreciate it.”
“I would just say that transparency in that regard alone would mean meetings should be coordinated through the Village Board. I’m not saying that you were totally wrong,” Campbell assured her. However, he said, “we as a Village Board thought that wasn’t the best approach. We mentioned that to you. If we had everyone working with legislators and town officials on the side, how are we going to get the information? How are we supposed to know that what you’re saying is accurate?”
Square told him that “the bottom line is you just don’t cancel other people’s meetings. If you have an issue, you go to the person and you speak to them. You don’t ridicule them in public.”
“Are you saying I did that?” Campbell asked.
“No, I’m not talking about you in general,” Square said.
“I would find that dysfunctional,” Falloon put in, provoking laughter. He termed the May dispute “more of a misunderstanding” than anything else. “It was unfortunate.” He added that he did not object to Square’s meeting per se because it involved village residents. Nonetheless, he said, “with the Village Board, there needs to be a span of control and the mayor needs to guide” activities. “As a board, when you’re working to get things done, you have a direction, you have a mode, have a method and that’s the way you go. When the mayor’s leading it, that’s the way you’re going.” He observed that “any time you have a functioning group, when someone disagrees with it, it seems to be dysfunctional. I still think we’re trying to do the right thing. But it’s unfortunate sometimes you do not like the way we do things.”

Policing the Village
Ultimately moving to another topic, the three candidates touched upon the merits of a full-time police force versus a part-time force, which Cold Spring currently employs. “I don’t know” whether one is better than the other, Campbell said, recommending a survey of comparable villages for information. “I’m sure it’s something the board could look at.” A member of the village team negotiating a contract with the police force, he said they were “very close” to an agreement. Square said all options should be investigated and proposed that some police might operate on foot or on bicycle to meet the public more.  She also said that the village government should have known the contract was going to expire and begun working on it sooner. Speaking as a police officer, “what would concern me is not having a contract or some type of agreement,” she said.
Falloon said that with a part-time force, “one of the negative things is there’s not a connection” between the police and residents” but that disadvantages come with a full-time force as well. “There’s a lot to weigh,” he said. “It’s a very fine line and you have to balance how to get things done.”