It’s a story that has a little magic and fairy dust sprinkled onto it.  There’s this neglected character who falls into a sleep for decades.  Some people remember her vividly and wonder what has happened to her, while others have heard of her but have never actually seen her, or never noticed her anyway.  Then, seemingly out of the blue, a prince appears, and with one kiss, the character reawakens and life begins anew.Substitute a place for that character, and a group of dedicated artistic entrepreneurs for the prince, and hopefully a happy ending for all, and you have the story of The Beacon Theatre, set to emerge from obscurity and shine its lights once again on Main Street in Beacon. The theatre, dormant since 1999, and, square footage-wise the largest building on Main Street, was bought last year, and is now in stage one of a three-year, three-stage fundraising process which takes flight this weekend with a two-day event entitled Freeze Frame (see related piece at the end of this article), which combines film screenings, panel discussions and a luncheon.  Freeze Frame is presented in association with DIA: BEACON and with Philipstown’s well-known catering company, Fresh Company.  If this was a Mickey Rooney, Judy Garland movie, then the kids would just put on a show and, in a week or two, the theater would be up and running.  The reality is, of course, more complex and challenging.

The rediscovery of the theater

Christine Busacca-Vittorini, founder and artistic director of 4th Wall Productions, which has purchased the theater, came upon the place in a happenstance way, literally walking down the street ten years or so ago, chancing upon it, wondering about it, peering in and then attempting—for years on end—to find out what the story of the boarded up theater was.  After a long, frustrating time dealing with a lack of response, she was finally directed to the realtors representing the owners, and, upon gaining access to the theater, had that jaw-dropping moment, as she looked upon the well-preserved Art Deco interior, replete with about 400 of what used to be 700 seats, wall sconces and many other original fixtures. As Busacca-Vittorini puts it, “As soon as I walked in, it was must, must.  I had been working at [Poughkeepsie’s Arts Center] Cunneen-Hackett, and it had been in the same state, it became renovated and was thriving.” 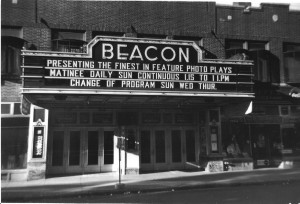 The Beacon in its heyday (Courtesy of Beacon Historical Society)

Busacca-Vittorini and her partners, Jim Brady and Pat Manning, had and have a vision, and, with years of experience in both the arts (including stints on Broadway, Madison Square Garden, MTV and lots of grass roots local arts activities on both sides of the river) and in government between them, purchased the theater, closing last October.  They hope to initiate the first stage of their programming plans, summer theater camps for children and teenagers, by July, operating first in the lobby portion of the building.

Working in stages, the first steps in the renovation will be the exterior, including the faí§ade and the marquee.  The owner of the new Round House complex in Beacon is working as the general contractor for the project.  The second phase will involve the two floors in the front section of the building, which includes two storefronts, and what used to be the balcony, and is now an enclosed, overhanging loge. At one point the upper front adjacent to the 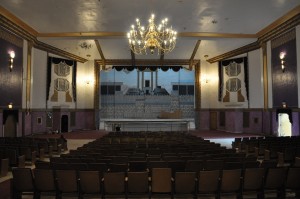 balcony contained a jazz club called the Wonderbar. It is to be turned into a dance studio.
After completion of phase two, all of the infrastructure of the theater itself will be addressed, from plumbing to carpentry to electrical work to bring it all up to code and into the 21st century, but retaining its 1930s heritage. The original theater had tapestries on the side walls and a mural on the ceiling. Amazingly, there is a present-day muralist in Beacon who has possession of the original pigments from the old Beacon Mills, and is able to turn them into paints in the original colors. Luckily, the Beacon Historical Society has many images of the interior from its heyday.

How will it be funded?

Of course, the big question in all of this is funding, particularly in this economic era, with its rash of red x’s through arts’ monies.  Pat Manning, capital campaign manager for 4th Wall, (with a background in politics dating from many years as a multi-term Dutchess County State Assemblyman,) feels resolutely that the funding will be there, based up the ability of the theater to pump economic life into Beacon.  His fundraising drive is focused upon economic development and job creation. Calling the theater the essential ingredient in making “a vibrant Beacon with an arts anchor complementing DIA—it makes good business sense,” Manning anticipates a mix of State and federal funding, along with private support.  “Art is a business,” says Manning, “and artists are often the first settlers in areas which then take off. Right now it’s happening in Inwood; we can be next. We have everything the Berkshires has to offer: mountains, a museum, a large artistic community, and it’s all within walking distance.”  Manning cited the strong support the project has received from Beacon’s Mayor Steve Gold, calling him “so accessible; he springs right into step with anything and everything.”
Breaking it down into a step-by-step process, Manning envisions monthly fundraisers (this weekend’s is the first) raising money in small increments which will then take care of “the little things we need to get to immediately.  Things to get our ideas up and running.  That’s why this is a multi-year endeavor.”  The fundraising began with a Pete Seeger/Tom Chapin concert last September. It is hoped that the campaign will draw to a conclusion in 2013, which is the City of Beacon’s 100th anniversary.

Past and future: history and programming

The theater was originally constructed in 1928 as a vaudeville house.  However, by the time of its 1934 opening, the Depression had taken its toll, and vaudeville’s days were dwindling, and the theater became a movie palace instead, billing itself as “the most beautiful theater from New York City to Albany.”  It continued showing movies until the late 60s, seeing life again only as a warehouse and, finally, a storefront church, before falling into complete disuse by the end of the 90s. 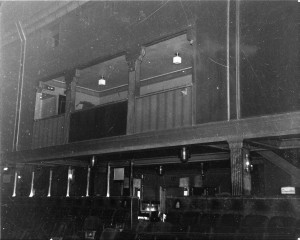 Multi-faceted programming is envisioned for The Beacon, once it is fully up and running.  The hopes are for the venue to host concerts along the lines of those produced at the Tarrytown Music Hall, professional and community theater, including possibly a resident theater company; an expansion of 4th Wall’s already successful summer theater camps for children (which have been operating at Cunneen-Hackett); dance performances and recitals; comedy and improv nights; workshops; a playwright series; independent, international and revival films; a film festival; Saturday morning fairy tales and tales from around the world for children; and acting, voice, and choral classes. Many of the programs will be multi-disciplinary. A dance studio will occupy the upstairs space. According to 4th Wall, “the large open hall, elevated stage, and high fly space allow for a wide array of uses.”  Details on this summer’s theater camps are already up on the website. 4th Wall is no newcomer to all of this, having been in operation for 17 years now.

Collaboration
Asked if a collaboration was on tap with DIA: BEACON, the 4th Wall team said nothing had been set up just yet but that “DIA is excited about working with the theater, and it can be as simple as art-related films or plays about art or artists.  We’re interested in ways that different institutions can cross paths and collaborate.”  The theater also plans on becoming involved in every Second Saturday evening throughout the year.  4th Wall also intends on bringing in interns from the community and is already using mentoring in 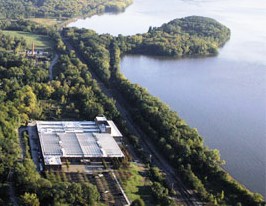 its summer theater programs, with its “5-year-older” program in which 18-year-olds assist the teacher in filtering through ideas and instructions to 13-year-olds and the 13-year-olds do the same for the 8-year-olds, et cetera.  Outreach to local schools is also a component of the theater as a whole. Founder Busacca-Vittorini is particularly committed to “giving women and girls a leg up, showing them they can be and do anything, from building to producing.” Hopes are to have the stage and entire facility come to complete life by early 2013.  Learn more about all of the plans and the history at www.thebeacontheatre.org.

FREEZE FRAME
This weekend’s Freeze Frame benefit combines film, art, discussion and food in events unspooling over two days. According to David Majzlin, Freeze Frame coordinator the programs were designed to “cross-connect many different disciplines and show how multiple art forms can feed off each other.”
Saturday’s program will be presented in association with DIA:BEACON, and will begin with a screening of the documentary Herb & Dorothy, which is, according to program notes, about “a postal worker and a librarian who, with very modest means, managed to build one of the most important contemporary art collections in history.”  The subjects of the film will be making their first trip to DIA for the occasion, to see the works of many of the artists they were the first to collect.  They were enticed by the 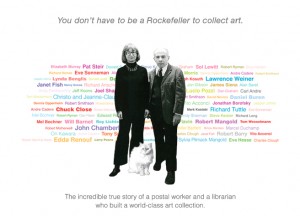 description of Beacon as a place where nascent collectors can follow in their footsteps, visiting the many small galleries and being the first to discover and collect emerging artists. A panel discussion on “The Art of Collecting Art” with the filmmakers, Herb and Dorothy Vogel, artist Charles Clough, and Executive Director of the Roy Lichtenstein Foundation, Jack Cowart and reception, catered by Garrison’s Fresh Company, will follow, featuring cheese & onion tartlets, apple & cheese biscuits, gougí¨res, and a vegan flatbread.
On Sunday, fresh food will take center stage, with a screening of 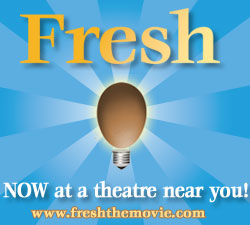 reputation within the local agricultural community and so it was a perfect fit.” Shelley Boris, chef and co-owner of Fresh Company is, in turn, happy to help support “local organizations, especially those connected with the arts, education or the environment in ways within our scope as a small business.”
Majzlin notes that both of the films have as a common bond the idea of “supporting local—both films embody this—Herb and Dorothy never bought outside of New York.  Fresh is all about supporting local farms.  This whole fundraiser is based upon the idea of local support, in terms of The Beacon Theatre, in terms of everything.”
The events on Saturday take place at DIA while those on Sunday will be held at the Howland Center (the screening and discussion) and the Beacon Theatre. There are a variety of pricing structures from some to all of the many components of the two days; visit thebeacontheatre.org/freezeframe for all of the details.  For guaranteed seating, tickets may be purchased online through that web address, or by calling 845-226-8099.

One thought on “Overture Time at The Beacon Theatre”