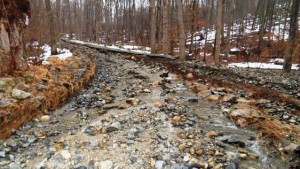 Heavy rain, melting snow, water-saturated ground and debris-laden streams all combined to do extensive damage to the Town of Philipstown’s network of residential dirt roads on Monday, March 7, according to town officials. With more rain forecast for Thursday, March 9, further deterioration of the roads, located mainly in Garrison, is expected, with the possibility of temporary closures, neighborhood traffic disruption and further damage to both town roads and private property, especially driveways. “It’s the worst road damage I have seen in my lifetime,” said Philipstown Supervisor Richard Shea, speaking in his office Wednesday evening, just before a Town Board workshop. “We are getting more intense and more frequent storms. We have to begin to think differently about how we are managing the problem of maintaining these dirt roads,” he said.
Shea accompanied Philipstown Highway Superintendent Roger Chirico and Putnam County highway and emergency services officials on a tour of the road damage Wednesday morning. “We have spent a lot of money on these roads and to see it all washed away, it was heartbreaking,” said Shea. “It’s the worst I have seen on the dirt roads since I have been on the job,” said Chirico as he sat in his office trailer at the Highway Department headquarters on Fishkill Road in Nelsonville. Chirico, who has headed the department for more than 12 years, said there were numerous examples of streams and culverts filled with wind-blown tree branches and other debris that blocked the usual path of various waterways, forcing fast-moving water onto roadways where it washed away road surface, destabilizing the road bed and often cutting deep ruts of several feet in both sides of a road, creating a hazard and sometimes making the road impassable. 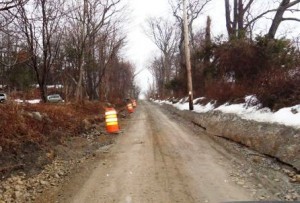 “I don’t know how much rain fell in the county but our share was enough for a total disaster for the dirt roads.  Things are so bad we are going to have to refigure out how we are going to finance the repairs,” said Chirico.  Shea estimated the cost of the damage “in the hundreds of thousands, if not a million dollars.” Chirico said he was doubtful any outside resources such as the Federal Emergency Management Agency (FEMA) would be available to tap for all the repair work needed.
Chirico cited sections of Philipse Brook Road, South Mountain Road, Old Manitou Road, Indian Brook Road East, and Old Albany Post Road as roadways that experienced serious damage requiring immediate work on road surfaces and replacement or repair of culverts and other pipes. Chirico described Indian Brook Road East as “gone for about a quarter of a mile.”  He said he and Shea were less concerned about this condition than some others only because the damage was where the road begins to run through state park land just beyond any Philipstown residences. Shea said it might be months before that stretch of road can be reopened. As he spoke, Chirico was making and receiving calls coordinating repair crews out dumping new road material to fill in the sides and surface of the roads and then grading the surfaces to restore them to regular condition.  Chirico acknowledged that a few Garrison residents had been temporarily blocked from using roads either to leave or get to their homes in the immediate aftermath of the storm but to his knowledge most situations had been resolved. 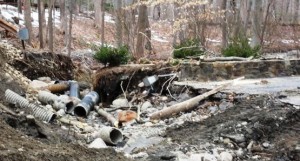 Jenn Lee, a Putnam Valley resident who drives her children to the Garrison Union Free School on Old Albany Post Road, said “on either side there were huge sections where the road was just not there anymore. It was the scariest ride I’ve ever had in my six years living here through all the snowstorms, fallen trees and black ice. It felt like an earthquake instead of a rainstorm,” she said.
One home at 98 Philipse Brook Road experienced driveway damage that would prevent entrance or egress by a vehicle for a longer period, said Chirico. He said his department had made a special effort to get an oil delivery to the house on Wednesday morning. But later Wednesday afternoon Chirico and a crew from his department were back at that address, clearing a pipeline that ran under a small bridge on the owner’s property. Chirico explained that the pipe was damaged and clogged and that when the storm arrived the strong running water in Philipse Brook backed up and quickly jumped its bank, taking out sections of the driveway, including lamp posts as well as a piece of the town road. Emergency repairs returned the brook to its usual path but the road remained closed and the water continued to flow slower than needed to prevent another backup if more rain fell soon. A retired operating engineer, Chirico at 78 operated the large backhoe needed to dig a wide hole in the driveway to take out the damaged pipe and clear accumulated debris.
“Dirt roads require a lot, a lot of maintenance.  There is constant grading, there’s always erosion, pipe work, culvert clearing and drains filling up with the materials used on the roads. It never stops. It costs a ton of money,” said Chirico, an elected official who previously served as both a mayor and a trustee of Cold Spring Village. “In my opinion, if you want to live on a dirt road your tax bill should be different than people living on a hard-surface road,” he said.  “Right now, for the town, it’s like taking dollar bills and tearing them up into little pieces and throwing them out on the roads.” 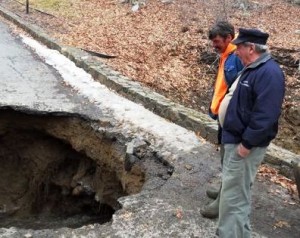 Shea emphasized that the term “dirt road” doesn’t reflect the reality of having to surface and bank the roads with mixtures of costly materials as well as the installation of various drainage systems. “The reality is no matter what we do, it gets washed away,” he said.
Maintaining and repairing the network of dirt roads at town expense has long been a subject of controversy and even lawsuits in Philipstown involving issues of historic preservation—Old Albany Post Road and Indian Brook Road are on the National Register of Historic Places—and rural aesthetics versus the practicalities of better water runoff and lower maintenance costs associated with paved roads. “We paved East Mountain Road North about 10 years ago, and there was no damage from this storm, and it is one of the steepest and longest of our roads,” said Shea, who plans to put together a group to begin a search for a different approach.  He said any discussion would have to include groups such as the Old Road Society, a local group dedicated to preserving the dirt roads. “We have to find a better, permanent solution. We can’t just keep throwing money at the problem,” he said.
Photos by K. Foley