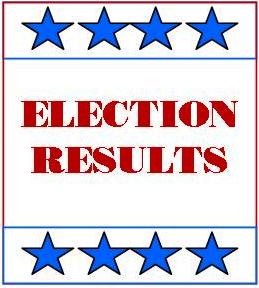 Cold Spring incumbents swept the village elections today as voters returned Mayor Seth Gallagher and Trustees Bruce Campbell and J. Ralph Falloon to office for another two years. With 547 votes, including absentee ballots, Gallagher defeated former Mayor Anthony Phillips, who got 371 total votes. Campbell, with 649 votes, and Falloon, with 631 votes, held off a challenge from Catharine Square, who received 361 votes. Village Clerk Mary Saari and her election-worker team announced the results to a crowd in the Cold Spring fire house at about 9:30 p.m., capping a day that began with voting at 6 a.m. Gallagher had previously defeated Phillips in 2009.
This year’s run-up to a hotly contested election clearly involved outlays of funds and included automated “robo-calls” to voters on behalf of Phillips and Square — unusual in village politics, postcards and brochures for Square and Phillips, flyers by Campbell and Gallagher, and large print newspaper 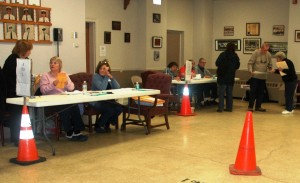 advertisements by various candidates or their supporters. Gallagher backers also made personal phone calls to prospective voters while proponents or opponents of the contenders at all levels wrote numerous letters-to-the-editor on Philipstown.info.
Elected as mayor in 1993, Phillips served eight terms before being ousted by Gallagher, who became a trustee in 2006 and then the village’s chief executive three years later. Falloon and Campbell were elected trustees in 2009, though the latter also served in that capacity between 2002 and 2006, when Gallagher claimed his place on the Village Board. Despite running against each other initially, Gallagher and Campbell collaborated closely after their mutual elections in 2009 and Gallagher tapped Campbell as his deputy mayor. Square, a relative newcomer to the village, serves on the Special Board for a Comprehensive Plan-Local Waterfront Revitalization Plan.

Incumbent and local political veteran Anthony Merante won an easy victory over challenger Steven Dubroff in the race for Nelsonville village trustee held on Tuesday, March 15.  Merante beat his opponent, a newcomer to village politics, by a margin of 82-43 with approximately one-third of the eligible voters making it to the village hall to cast their paper ballots in the first contested Nelsonville election since 2002. Merante, who also served as a trustee in the late 1980s, will begin his fourth consecutive two-year term.  He also serves as the chairman of the Philipstown Planning Board. 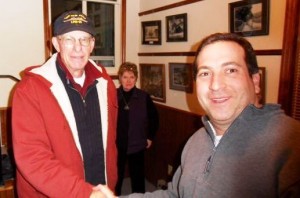 Dubroff thanked Village Clerk Pauline Minners and the three election workers who conducted the election and counted the ballots and then he congratulated Merante before making a hasty exit from a room populated by Merante supporters. “It’s good to have some opposition, got me a little nervous towards the end, but when people realize you’ve done good work and have people’s interests at heart it gets them out to vote,” said Merante.  “I’m glad there was competition this time so Cold Spring doesn’t get all the news,” he wryly added. Incumbent Mayor Tom Corless, running unopposed, received 109 votes.