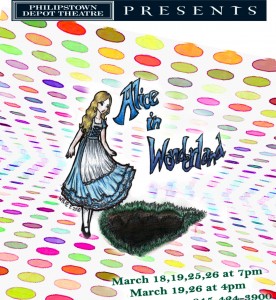 Alice has gone down, down the rabbit hole and has wound up, larger, or then again smaller, no make that larger than life at the Depot Theatre where the Youth Players are bringing her fantastical journey to life this weekend and next.These fourth through eighth-graders have transformed themselves into all manner of things, from playing cards to croquet mallets, Cheshire cats to gryphons and a small girl called Alice.  Or make that girls, as perhaps it was something strange ingested but it appeared at rehearsal that there was not just one Alice, but several, each one taller than the next.  Oh, it’s all terribly confusing.
Best let the children sort it out.  They’re terribly creative you see.  This reporter asked a few of them to embellish this tale with their own account of what a further adventure of Alice might be. Here it is, for as much as one could make sense of it all:

Andrew: She should grow gills by eating something and have an adventure. Tanya: in the Pool of Tearsa. Andrew again: yes, and find fishes and turtles to talk to. They take her with them and she frees them from their fishing net and then they help her get rid of her gills. Also, she should go to a tropical island.  She surfaces from the Pool to a deserted island. Sophia: She should go to a carnival! Andrew, back where he left off: On that island there should be an oversized bird. Estella: She becomes as tiny as an eyeball and she meets a lizard. Andrew: Make it a platypus. Estella: Yes! whatever.  So then the platypus says are you a cricket? Sophia: Ooh, I’m trying to think of something creative here. Andrew: The jabberwocky should be a six-winged furry-winged egg-laying amphibian. Addie:  Alice should meet some relation of the Queen of Hearts who was banished into the woods. He’s written a set of verses to the Queen that flows into this play. 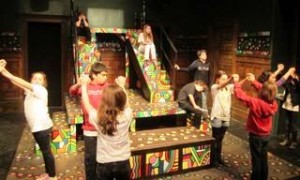 Throughout her whole adventure she lies and she’s called into the court and that’s an internal conflict.  Estella: She’s still eyeball size and there’s a giant magic watermelon that she finds. She doesn’t know that it’s magic. It keeps jumping up and saying allo allo.  And there’s a miniature amusement park that has rides like no other amusement park has.  But when she rides one she doesn’t know but it takes her to the play! Bridget: It takes her to Texas where she sees a peanut that cracks open by itself and she eats it.  She gets an inch larger and the peanut shell comes to life and starts chasing her. Harper: She falls down the rabbit hole again and she gets caught on it and she starts to pass out and it’s pouring, pouring and the water starts rising. Jack: The Red King and Queen both die and the White Rabbit takes all the power! Margaret: She’s running away into a forest and all of the characters are chasing after her and she falls UP the rabbit hole and her sister isn’t there anymore because she’s turned into something else.

Uncommon nonsense you say?  Well, it gets curiouser and curiouser.  Or would have had the cast not become so animated telling these adventures that the director came backstage and quite reasonably chewed out all of these tale-tellers and this writer-downer of tales for disrupting the rehearsal and missing cues. Silence In The Court or something like that was what he said with thunder in his voice.  Oh Dear!  At which point Yours Truly disappeared down that rabbit hole of shame and whispered sssshhhh to the tale-tellers, and slunk off to have a comforting soup of the evening instead, nearer to hear the end of that wondrous tale.  Until rehearsals are over that is.  Which is quite likely to be quite soon, as the show opens on Friday, March 18. So it would be a good thing, if the rehearsals were indeed over, by then, would it not be? Let the court decide. 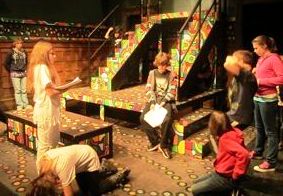