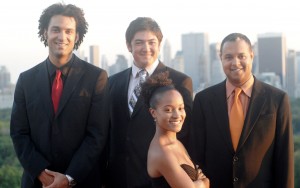 The Harlem Quartet, whose mission is to “advance diversity in classical music while engaging young and new audiences through the discovery and presentation of varied repertoire, highlighting works by minority composers,” will perform the first concert in the Howland Chamber Music Circle’s spring season. The concert will feature a varied and interesting program, featuring the String Quartet Opus 18, No.3 by Beethoven, “Take the A Train” by Strayhorn and Ellington, Borodin’s String Quartet #2, and the String Quartet #1 by Wynton Marsalis and will take place on Sunday, March 20 at 4 p.m. It will be followed by a reception to meet the artists.
The Harlem Quartet consists of Ilmar Gavilan and Melissa White, violin; Juan-Miguel Hernandez, viola, and Paul Wiancko, cello. Praised for its “panache” by the New York Times, the Quartet is currently the resident ensemble in the New England Conservatory of Music’s Professional String Quartet Program.
The quartet opened its 2009-10 season returning as featured soloists on the national Sphinx Chamber Orchestra Tour, making 13 stops coast-to-coast, including Carnegie Hall. In December it played two performances at the White House, and made an appearance Christmas morning on NBC’s Today Show. The quartet also performed by invitation with Itzhak Perlman at the Metropolitan Museum and made its London debut performing at the residence of the US Ambassador to the UK.
The Harlem Quartet made its acclaimed Carnegie Hall debut in the fall of 2006 at the Sphinx Organization’s 10th anniversary gala concert. In collaboration with cellist Carter Brey, it performed at the Library of Congress in a concert employing the Library’s matched collection of Stradivari instruments, including Schubert’s Cello Quintet.
This tour of the Harlem Quartet is made possible by a grant from the Mid Atlantic Arts Foundation with support from the National Endowment for the Arts.
The Howland Cultural Center is located at 477 Main Street, Beacon, Tickets at $30 ($10 for students) can be reserved by calling 297-9243. For more information visit www.howlandmusic.org/