The March 15 Haldane Board of Education workshop covered a diverse range of topics: from honoring student athletes and their coaches to whether or not additional assistant coaches should be hired to a detailed update on the status of the district’s use of technology to a passionate response to a resident’s controversial comment on the significance of teaching as a profession. 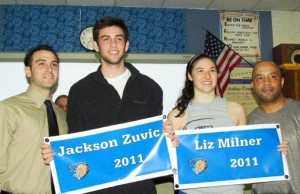 School board trustees honored Liz Milner and Jackson Zuvic, two outstanding student athletes, both of whom surpassed the 1,000 point mark in senior basketball this season. “Sports are a big part of our education system here, “school board president Dave Merandy said. “I don’t think anyone here will argue with that.” Merandy praised Milner saying, “I’ve been impressed with Liz’ maturity on and off the court. She’s been a great spokesperson for us.”
He credited Zuvic for being a big part of the boys’ team’s success this season. “It’s great to see the boys up there again Jackson. It really excites the community.” Merandy also referred to Zuvi’s father John as “one the best basketball players I’ve seen.” Also honored were varsity girls’ basketball coach Tyrone Searight and varsity boys’ basketball coach Joe Virgadamo, both of whom were recently named coach-of-the-year.

The Haldane Lacrosse Association lost its bid to have an assistant coach appointed after arguing that the extra staffing would improve safety in a very physical sport. “I know we’re in a bad place” said a Lacrosse Association representative, referring to the tough budget decisions that school board trustees face this year. “But if any sport needs it [an assistant coach] it’s lacrosse because of [the nature of] the sport”¦ We’re trying to prevent injuries instead of treating them”¦in the long run it will save money.”
Board members were not convinced.  More than one trustee used the phrase, “In a perfect world”¦,” as one by one they essentially said that while the idea of more assistant coaches has merit, the district cannot afford it at this time. Merandy was especially passionate, saying that the lacrosse team cannot be looked at in isolation. ‘If we really start addressing this “¦we’ll have to start eliminating teams at Haldane. It is budgetary. Our main concern is education. Right now in this [economic] environment”¦to add to extra curricular makes no sense to me”¦If safety is the issue then we’ve been really lucky [in the past.] Superintendent Mark Villanti will bring a proposal to the next meeting which will recommend additional, appropriately trained chaperones at games, a move which would be less costly while providing additional support on the sidelines.
Haldane’s president also questioned some people’s perception of the challenges facing the district. “Some people don’t believe the economic environment [is that bad.] They think we have tons of money. The fact is we’re trying to keep afloat. We’re cutting hundreds of thousands of dollars” Merandy said.
Trustees approved a resolution permitting a Haldane freshman to participate on the Beacon High School swim team. The student will represent Haldane as a “team of one.” This practice is common among school districts that lack certain sports teams and will not add to the Haldane sports budget.

Technology as teaching tool
Haldane’s administration updated trustees on the district’s Technology Plan. Speaking with Philipstown.info, trustee Gillian Thorpe explained the plan’s significance. “We receive government funding through ‘eRate’ and must have an adopted Tech Plan and update it every 5 years. We made some big changes – such as moving away from purchases through BOCES, to buying outright.  We saved a lot of money. We are making sure we focus on technology as a tool rather than an extra – with the understanding that not every [potential] new piece of technology is necessary.”
High School principal Brian Alm also provided a status report on the Virtual High School (VHS.) The program offers students access to a myriad of courses not offered at Haldane:  from sustainable engineering and zoology to biotechnology and personal finance. Alm said that while six students enrolled in VHS last year, two had to drop out because of scheduling conflicts. He also said it was a learning experience for all concerned. “Our initial instinct was to target our most responsible juniors and seniors.” But because those students already have such heavy course loads Alm said he will target ninth and ten grade students in the future and possibly eighth grade as well. Haldane subscribes to VHS through BOCES at a cost of $2,750, an amount Alm calls “a bargain price.” Haldane is allotted five seats per semester and Alm said, “I think we will be up to capacity next year.”

Teaching: is it special?
At the school board’s last meeting, local resident Joe Vitanza was critical of teachers’ salaries and as part of a passionate plea to cut taxes made the comment that, “Teaching is not special.” While Superintendent Villanti did not comment then, he made an emotional address about the issue at the March 15 workshop. “At the time I felt no need to comment because it is simply a truism that teaching and learning are special”¦My point is simply this. We can talk about what a superintendent or anyone else makes. I have a big chin. You can speak honestly. But”¦let’s not lose sight of the fact that there are educators and support staff at Haldane who work hard to educate the children of this community because they care about teaching and learning.” His comments brought applause from the audience which was made up primarily of teachers and staff along with a few parents.
Merandy had a different take on Vitanza’s assertion that teaching is not special. “I think the comment was made out of frustration. I think what he meant was that he’s working very hard and things are coming down on him. We’re supposed to be in this thing together.”
“I think we all get that” Villanti responded.
“I don’t think we do,” Merandy said.
“There are tough things going on around this country. This budget”¦it keeps me up at night” Villanti concluded.

Budget vote date set
The board approved a resolution to hold the annual district meeting and election on May 17, 2011. Residents will either approve or reject the proposed 2011-12 budget as well. Trustees will adopt a budget in April.
Photo by M. Turton