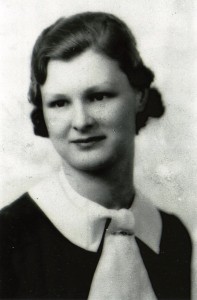 Snapshots of one life

Jean died in Kingsville, Ontario at 9:50 p.m. on Friday March 10, 2011. Her passing caused but one deep sigh to be heard in all of Philipstown, in a small house on Garden Street in Cold Spring. The sigh came from the only person in Putnam County who the deceased had known or affected – her son; although it could be argued that through him she indirectly affected many others in this area.
At first glance, Jean’s passing is of little consequence to the other local residents. Yet, when viewed in terms of change and history, her life becomes quite relevant.  It reinforces not only our own mortality and the inexorable passage of time, but also just how much can happen, just how many things can change, in the course of a single life- time. How some things that used to be the norm are no longer acceptable. How certain things that used to be common, if not valued, were lost, only to be considered very desirable once again.
Consider these snapshots from Jean’s life as viewed through the lens of present day Philipstown. What would each snapshot be viewed as? Quaint? Impossible? Admirable?  Inappropriate? Instructive? Desirable? You decide.

Early years: a culture of farming

Jean was born on New Year’s Eve, 1914, five months into the war to end all wars. At the time, Belgian draft horses were used to work her parent’s Kent County farm. She had eleven siblings – six brothers and five sisters. She outlived them all. Five of her six brothers became farmers. After high school she took a year off to help her mother, Louise Drew, with work on the family farm – mostly gardening and cooking. In the 1930’s she, her mother and sisters traveled to northern Ontario to view the Dionne quintuplets who were on display in a government facility.

Jean went to Normal School and became a teacher. She taught grades one through eight, in one classroom. She met her husband Joe in the coatroom at a church hall. During Prohibition she and Joe were known to the occasionally visit a “Blind Pig.” When she announced their July 12 wedding date, her father, Martin Drew, a devout Catholic, made her change the date because it fell on a holiday celebrated by Protestant Orangemen. She retired from teaching after only a few years to become a stay-at-home mom. 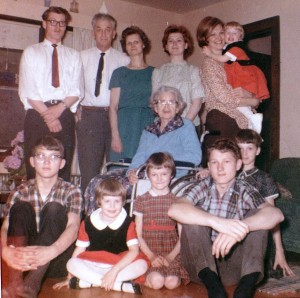 Jean's family c. 1966. Jean and Joe are in the back row. Nellie is in the middle in her wheechair.

She and her husband Joe had eight children – four boys and four girls. Initially they lived with Joe’s mother Nellie in a very small, three bedroom house that had once served as a railroad shed. No indoor plumbing. Pump on the back porch. Outhouse out back. Wood stove for heating. Her first child was born at home, delivered by her mother-in-law Nellie who worked as a practical nurse and who brought many others into the world as well. They stayed in Nellie’s house until their fifth child was 2 1/2 –  the same person who 58 years later would breathe that deep sigh on Garden Street. They then moved to their permanent family home – a large, four bedroom, brick house on a one acre lot in Oldcastle, something less than a village. In raising her family Jean prepared more than 240,000 meals: 10 people, 3 meals a day for each, for 20 years – minimum. Her weekly ironing of laundry for those 10 people included handkerchiefs and cloth diapers. When Nellie fell and broke her hip, Jean and Joe returned the favor and took her into their home.

Jean canned fresh, local foods in large quantities. Peaches. Pears. Strawberries. Raspberries. Chili sauce. Corn. Peas. Pickles. Tomatoes. Apple sauce. Plums. Apricots. Beets. She bought grass-fed beef from a local cattle farm – by the full side or hind quarter; killed at the local slaughter house; packaged at the local butcher shop. Very little was wasted in Jean’s household. Recycling was a given – it simply wasn’t called that. Old clothes became cloth rugs; table scraps became pet food; teabags were saved, their contents used to sweep the dusty basement floor. When she baked pies she often sent one over to the men who worked next door in the cemetery. If a farmer was working a nearby field on a hot, dusty day she would dispatch one of her kids with a mason jar of cold water. Jean had one commandment that her kids never entertained breaking: “Thou shalt not be late for supper at 6.”

On a typical Saturday, her sons would leave home by 9 a.m. and return at 5:59 p.m. Their day might include rafting or playing hockey on local ponds; swimming at the local motel pool; breaking into an abandoned farm house and playing in the barns; inflicting one prank after another on one particular family; riding five miles by bicycle to wade down a creek to spear pike or carp: stealing peas and corn from area fields; shooting crows and frogs – or hanging out for hours with men much older than them at the local all-in-one restaurant/pool hall/ post office/variety store. Jean did not track them by cell phone. There were no calls home to check in. There was no parental anxiety as to their whereabouts or safety: as long as they were home for supper at 6. Jean never got her driver’s license.

Low-Tech Pleasures
Hers were simple pleasures: a 30-minute break  from housework every afternoon to have tea and watch  “As the World Turns” (the soap opera premiered in 1956 and aired its last episode just six months before Jean’s death); reading the daily newspaper each evening; playing a cutthroat card game called “Screw Your Neighbor” with her family — the name always made her giggle; occasional euchre parties or bingo at the church hall; going out with her husband perhaps once a year; taking batting practice in the back yard with her children and grandchildren each spring at the start of baseball season. She hit very well at 80 though she never mastered the art of hitting to the opposite field.

Religion, politics and philosophy
Jean was a devout Catholic. She had great difficulty at first accepting that some of her children didn’t share her beliefs, but, as she grew older, she became very open to and accepting of the paths that her children and grandchildren chose. She voted liberal but lived a conservative life. Her day-to-day philosophy was, “If you can’t say anything good about someone then don’t say anything at all.” That and, “Mind your Ps and Qs.”

Transitions
Her husband Joe died in 1972. She enjoyed living in the large family home until being there alone became too much. (The crew from the cemetery always cut her grass. One of several neighbors with tractors always plowed her driveway in winter.) She enjoyed apartment living in the city until that also became too much. She enjoyed life in an assisted living facility until her hip betrayed her. She enjoyed life in what would be her final home – a nursing home, where she was much loved by staff. She made each transition with grace and acceptance, including her death.

Final chapters
From the time of her husband’s death until her own passing, Jean was well taken care of thanks to Joe’s Chrysler Canada pension, their modest and hard-earned savings and Canada’s imperfect but universal health care system. She made her own funeral arrangements many years in advance. She kept a journal until the end, in perfect old-school handwriting. She read every day. She never missed Jeopardy and Wheel of Fortune in the evening. Jean knew what she wanted for the last days of her life. She gave clear advance directives. No heroic measures. Comfort measures only. Do not resuscitate. During one bad episode a few months before her death she refused to go to the hospital. She wanted to die at home, which she did, peacefully.

Thanks for the remarkable photo album Jean.
Photos courtesy of M. Turton