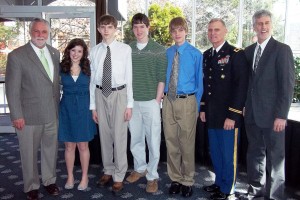 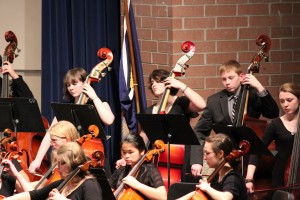 James I. O’Neil High School junior Stephanie Lozina performed with the New York State Band Director Association (NYSBD) Honor’s Jazz Ensemble in Syracuse, N.Y. Under the direction of Mr. Paul Evocovich, jazz director from the College of Saint Rose, Stephanie was one of 18 musicians selected from throughout the state.  The students rehearsed for two days prior to the March 6 concert. Stephanie and the rest of the ensemble performed arrangements of Dunedin, Have You Heard, April In Paris, Category 5 and Rockin’ In Rhythm.

The OHS Band attended a New York Philharmonic open rehearsal performance on March 10.  The annual trip took the group to Avery Fisher Hall in Lincoln Center where they listened to performances of Bela Bartok’s Concerto for Orchestra, Franz Joseph Haydn’s Symphony No. 6, and Concerto for Piano and Orchestra by Ligeti.  After the performance, the students met with orchestra bass player David Grossman. Grossman was inspirational and told students about his life as a musician, as well as answering many student questions.

Ten choral students and one band student represented the OHS music department at the New York State School Music Association’s (NYSSMA) All State Music Festival held at Wallkill High School on Saturday, Nov. 20. Thirty-one school district music departments were represented at the festival. Participation was based on student scores on the NYSSMA 2010 evaluations.

Monroe-Woodbury High School hosted the 2010-2011 High School All County Music Festival the weekend of January 28, 2011.  Fourteen choral students and two instrumental students from OHS participated in the concert held on Saturday, Jan. 29. The Festival brings together student musicians from throughout Orange County.